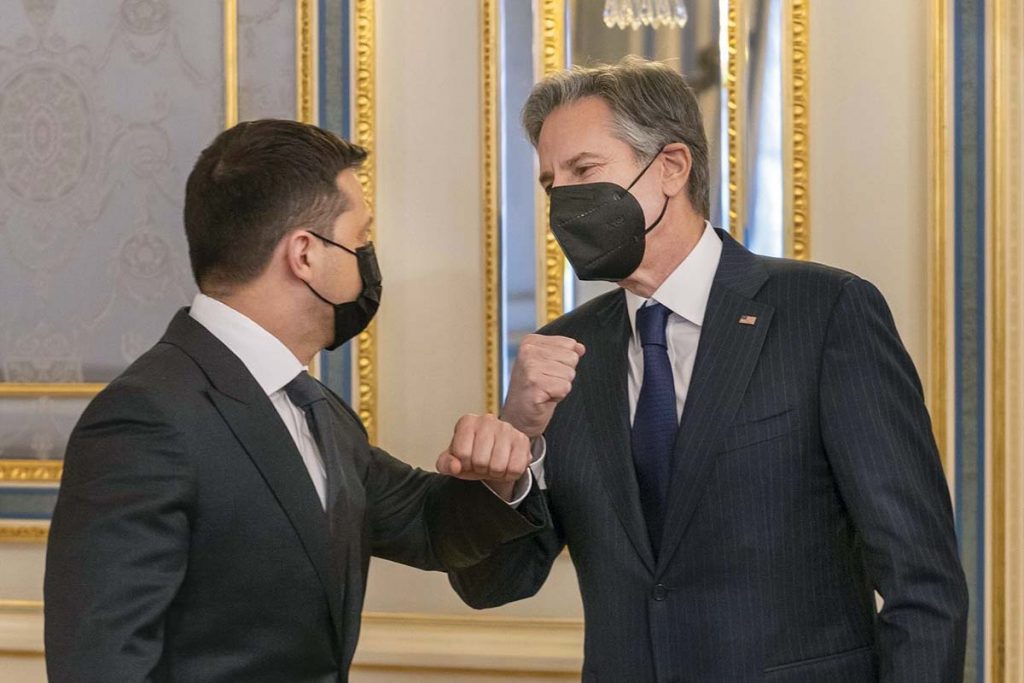 KYIV – Washington and Moscow remain at a diplomatic impasse regarding the security situation in Kyiv as Russia continues massing additional troops and heavy weaponry near Ukraine.

U.S. Secretary of State Antony Blinken, a congressional delegation from Washington and Germany’s new foreign affairs minister visited Ukraine this week to show their support for the eastern European country’s sovereignty as it faces the threat of a further Russian invasion.

Russian President Vladimir Putin has threatened to use “military-technical” force if his demands, outlined in two draft treaties last month, are not met. Those demands include ending NATO cooperation with Ukraine and for the neighboring country to never join the defense alliance.

After meeting with the foreign delegations, Ukrainian President Volodymyr Zelenskyy on January 20 addressed the nation to de-emphasize the growing Russian military deployment combined with a permanent presence in parts of occupied Donbas and the Crimean Peninsula.

He blamed the media for stoking panic amid a war that Russia has waged for nearly a decade and for exaggerating Russia’s aggressive military posturing around Ukraine’s borders.

“What’s new? Isn’t this the reality for eight years? Didn’t the invasion start in 2014?” he said on video. “Did the threat of a large-scale war appear only now? These risks existed. … They haven’t become bigger. The excitement around them has grown.”

As Ukraine’s second war-time president was trying to calm the nation and offer reassurance despite swelling numbers of Russian troops and an array of military hardware, U.S. President Joe Biden said the opposite.

At a news conference the same day in Washington, Mr. Biden said he believes Mr. Putin will “move in” on Ukraine but doesn’t seek “full-blown war.” He then indicated that the degree of “incursion” would dictate how the West responds.

“It’s one thing if it’s a minor incursion, and then we end up having a fight about what to do and not do,” Mr. Biden said.

White House spokesperson Jen Psaki later clarified that the White House meant to say that “if any Russian military forces move across the Ukrainian border, that’s a renewed invasion” and will be met with a “swift, severe and united response” that will include additional sanctions by the U.S. and “our allies.”

Mr. Blinken, after meeting with Ukrainian leaders on January 19, stressed the need for unity “among allies and partners as well as within Ukraine” in the face of the Russian military buildup.

He furthermore said that Russia could double the number of troops on the border “in relatively short order.”

Russian officials said this week that an unspecified number of troops are moving from the country’s Far East toward Belarus to hold joint military drills in February near Ukraine’s borders. Additionally, according to state-run RIA Novosti, Russia will start major naval exercises later this month that will last into February and will include 140 warships and vessels, over 60 aircraft and about 10,000 military personnel.

Two amphibious assault squadrons and five sea craft overall will enter the Black Sea from the Baltic Sea as part of the drills.

Ukraine’s military leadership has also offered the same assessment about how quickly Russia can bolster its sizable presence along the border. Air Force Times reported that Russia has 36 Iskander-K missiles stationed around Ukraine’s border. They have a striking range of up to 700 kilometers, with some having the ability to reach Kyiv.

In short, “Russia is setting the conditions where it could conduct a significant military escalation, including a large-scale ground invasion, on short notice and with little warning, giving its threats greater weight,” Rob Lee, a fellow at the Foreign Policy Research Institute in Philadelphia, wrote.

Meanwhile, Ukraine’s Cabinet of Ministers has allowed each region’s territorial defense unit – whose troop total is supposed to reach over 100,000, to even use their own hunting weapons when performing duties.

While in Kyiv, the seven visiting senators reaffirmed the U.S. commitment to the country in their meeting with Mr. Zelenskyy.

A spokesperson for Mr. Zelenskyy said he urged the lawmakers to impose sanctions on Russia now.

“President Volodymyr Zelenskyy believes preemptive sanctions would be more effective” rather than imposing them after a further invasion by Russia, spokesperson Serhiy Nikoforov told The Ukrainian Weekly.

He discussed with counterparts “current assessments of risk to Ukraine. … While there, he also had the opportunity to discuss the current situation with [Mr.] Zelenskyy and efforts to de-escalate tensions,” a CNN report said.

Despite no bi-lateral diplomatic breakthrough between the U.S. and Russia to cool tensions, combined with multilateral talks between NATO and the Organization for Security and Cooperation in Europe with Moscow, Russia insists in won’t further invade Ukraine.

Speaking to reporters in Moscow on January 19, Russian Deputy Foreign Affairs Minister Sergei Ryabkov said his country has no intention to further invade Ukraine. What Moscow wants, he said according to Russian media, is “for us, the matter of priority is achievement of watertight, bulletproof, legally binding guarantees” that Ukraine won’t join NATO.

Russia still denies involvement in the war that it started in eastern Ukraine after annexing the country’s Crimean Peninsula in 2014. More than 14,000 people have been killed in Europe’s only current shooting war.

Meanwhile, Mr. Blinken was scheduled to meet with Russian Foreign Affairs Minister Sergey Lavrov in Geneva on January 21. America’s top diplomat has already said the U.S. won’t provide written responses to Russia’s two demands that were made in December and which Moscow says it expects.

New German Foreign Affairs Minister Annalena Baerbock defended her country’s policy of not selling arms to Ukraine while visiting Kyiv on January 18. Instead, she emphasized diplomacy as the main route to diffusing tension.

“Each further aggressive act will have a high price for Russia, economically, strategically and politically,” Ms. Baerbock added while addressing reporters in Kyiv.

Britain, however, delivered “thousands” of anti-armor weapons to Ukraine this week.

That shipment includes the “next generation light anti-tank weapon, or NLAW for short,” the U.K. Defense Journal wrote. Its manufacturer, Sweden-based Saab, describes NLAW as “the first ever single soldier missile system that rapidly knocks out any main battle tank in just one shot by striking it from above.”

Preceding the delivery, British Defense Secretary Ben Wallace published an essay defending Ukraine. He wrote that Mr. Putin is making “bogus allegations” about NATO to justify the “forced unification” of Ukraine. He called the Russian president’s arguments of the country allegedly being backed into a corner by NATO – only about 6 percent of Russia has a congruent border with alliance countries – a “straw man.”

Meanwhile, the U.S. Treasury Depart­ment added four suspected Russian operatives, all Ukrainians, to its sanctions list of people involved in “harmful foreign activities” on behalf of Russia. Two of them are current members of the Verkhovna Rada: Taras Kozak and Oleh Voloshyn.

The restrictive measures are part of Mr. Biden’s executive order from April 15 as “a sweeping new sanctions tool aimed at countering a wide range of Russian government-backed malign activities.”

Turkey, which neighbors Ukraine through the Black Sea, has again offered to mediate the Russian-manufactured crisis.

The country’s president, Recep Tayyip Erdogan, on January 18 warned Russia of invading Ukraine, calling it a “powerful” country with international friends. Speaking to reporters, he added that Russia should “review the state of affairs in the world and its own state of affairs before deciding to take this step.”

Mr. Erdogan is scheduled to visit Ukraine in February.