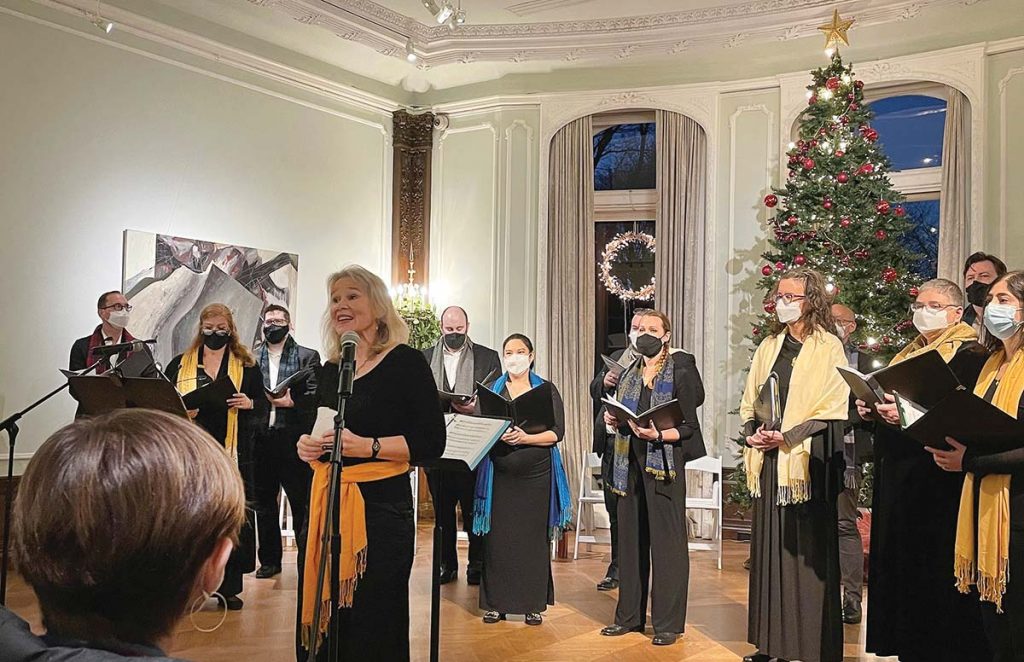 Facebook.com/marika.kuzma.5
Ensemble Cherubim under the direction of Dr. Marika Kuzma perform a concert of American, British and Ukrainian Christmas music on December 19 at the Ukrainian Institute of America in New York.

NEW YORK – A diverse audience of music lovers was treated to an exceptional concert of American, British and Ukrainian Christmas music on December 19 that featured Ensemble Cherubim under the direction of Dr. Marika Kuzma.

The choral concert was sponsored and hosted by the Ukrainian Institute of America and was also performed in New Haven, Conn, the previous day.

At the Ukrainian Institute of America, Ms. Kuzma began by inspiring her audience to imagine the angels singing with humans on the earth. Her musical talents quickly transformed the concert into a Christmas experience so many people seemingly needed to instill hope and warmth during the holiday season.

Fifteen professional and semi-professional singers came from California, Seattle, Boston, Cleveland, Houston, New York, and New Haven, Conn., to take part in the concert. Only one member of the ensemble was of Ukrainian descent. It was notable that non-Ukrainian musicians of such high musical caliber appreciate and perform music from the Ukrainian culture.

The program featured an eclectic blend of seasonal favorites, some well known to the Ukrainian community, as well as recent compositions by Ukrainian composers Roman Hurko, Volodymyr Yakymets and Volodymyr Yakovchuk.

The program paired many of the Ukrainian pieces with better known English carols and sacred works that captured a comparable spirit or poetic theme. The pairing showcased spiritual and cultural similarities.

Soprano Phoebe Jevtovic Rosquist gave a lovely rendition that evoked the Virgin Mary’s tenderly anxious concern for her Son as the Holy Family fled to Egypt. The composer perhaps wrote this lullaby as a kind of allegory for many refugee mothers that feared for their children during the post-war years when many Ukrainians faced the danger of repatriation to the Soviet Union.

Ms. Kuzma told the audience that “Liuli-liuli” was a carol sung in her Ukrainian diaspora community in Hartford, Conn., and that it was often sung during Christmas with her mother or one of her aunts singing the solo.

Soprano Katherine Howell performed a deeply moving rendition of the African-American spiritual “Mary had a baby,” arranged by William Dawson. To capture the wonder and mysticism of Christmas, the choir sang the Appalachian carol “I wonder as I wander” with tenor Brian Thorsett as soloist. This was preceded by a lush folk carol from the Poltava region, “Oy, dyvneye narozhdennia,” sung by the trio of soloists Kyle Picha, Miriam Anderson and Celeste Winant.

“It is a misunderstood carol,” Ms. Kuzma said. “It is about gratitude and resilience, traits Ukrainians have exhibited throughout their history.”

The concert seemed to fill a deep need in the community. While it gave Ukrainian Americans reason to be proud of their heritage, it also helped the largely non-Ukrainian audience recognize Ukraine as being more than a country dealing with military conflicts, nuclear disasters and political tensions. The concert also helped them see Ukraine as a country of deep spirituality and, as expressed in “Shchedryk,” as being a culture of abundance, gratitude and resilience.

Throughout the concert, Ensemble Cherubim was impressive in its ability to articulate Ukrainian texts with clear diction, bright dynamics, radiant harmonies and rhythmic verve. This was particularly evident in Pylyp Kozytsky’s “Oy, koliada, koliadnytsia” and Kyrylo Stetsenko’s “Dnes’ poyushche.”

Although she began her musical training in Hartford, Conn., before moving on to Indiana University and the University of North Carolina, Ms. Kuzma is better known for her work on the west coast where for 25 years she conducted university choirs and orchestras and taught numerous courses as a tenured professor in the Department of Music at the University of California, Berkeley.

During her storied career, she has collaborated with world-renowned conductors, such as Gustavo Dudamel, Nicholas McGegan, Kent Nagano and Esa-Pekka Salonen.  She also directed concerts of many of the world’s most challenging oratorios and classical masterworks, including the Brahms Ein deutsches Requiem, Bach St. Matthew Passion, Britten War Requiem and Stravinsky Svadebka.

Ms. Kuzma integrated a good deal of Ukrainian music into her university’s choral repertoire. Several members of the Ensemble Cherubim are alumni of her choral program that have developed a special affinity for Ukrainian music.  Working with these singers, she released a recording of Bortniansky’s choral concerti, “I cried out unto the Lord,” on the prestigious Naxos International label.

The concert was an important reminder that, as much as the world has embraced “Shchedryk” (known as the Carol of the Bells), there is a much deeper reservoir of Ukrainian music that deserves exposure to audiences and choirs, many of which are constantly searching for new sounds and always eager for something fresh, profound and spiritually uplifting.