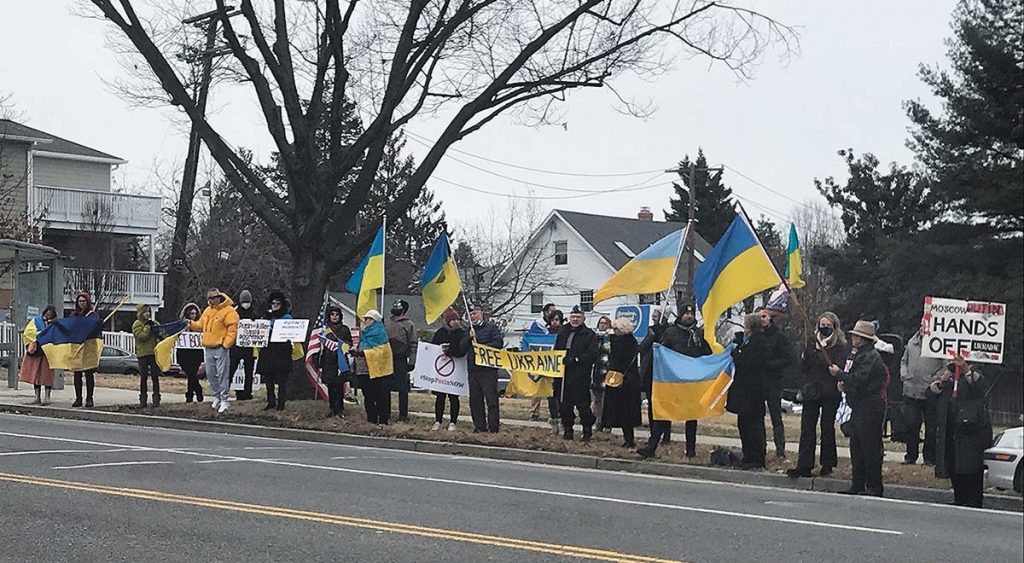 Zachary Dmyterko
Protestors gathered outside of the Russian Embassy in Washington on January 23 to voice their support for Ukraine and condemn Moscow’s actions against the neighboring country.

WASHINGTON – Activists and supporters of Ukraine held a rally outside the Russian Embassy on January 23 where they called on President Vladimir Putin to remove more than 127,000 Russian troops that are currently positioned within striking distance of Ukraine’s border.

The activists here came with signs, banners, loudspeakers and microphones, and they voiced their support for Kyiv amid fear of yet another Russian invasion of Ukraine. They also called on the Russian president to release his grip on the Crimean Peninsula, which Moscow illegally annexed in 2014, and remove Russian forces from the occupied Ukrainian territories of Luhansk and Donetsk.

The rally, organized by United Help Ukraine, a non-profit organization, was held on a frigid gloomy day. The Russian Embassy, surrounded by a steel bar fence, towered above the protesters like a fortress overlooking a hill.

The protest, which began with a small group of people carrying Ukrainian flags and posters, was the third rally organized by United Help Ukraine. Members of the group previously met in front of the White House on January 8 and January 15 to support Ukraine.

Marina Baydyuk, a community activist and organizer with the organization, said United Help Ukraine primarily works through Facebook to raise funds for charitable aid projects in Ukraine.  The group raises funds to pay for food and medical supplies that are donated to Ukrainian war refugees. Ms. Baydyuk said the group has been able to build a robust, transparent and reliable network to get donations where they are needed most in Ukraine.

She said the rally was organized to show that the Ukrainian American community in Washington was united in their condemnation of Russia’s aggression toward Ukraine. She added that fears of a renewed invasion have fueled the possibility of another massive humanitarian disaster in Ukraine.

Ms. Baydyuk was asked if members of the organization felt ready to do more to support Ukraine if the situation there worsened.

Meanwhile, the rally around the Russian Embassy grew larger, as families with children carried signs and waved Ukrainian flags.

One man, who donned a Russian flag on his shoulder and held a sign that read “Russians against Putin,” set up a loudspeaker across from the embassy. The man provided only his first name, Dima.

As the rally grew, the crowd began to chant “Putin, hands off Ukraine” and “Crimea is Ukraine.” Cars that passed the protest honked their horns in solidarity with the protesters.

One Russian staff member behind the gates of the Russian Embassy videotaped the start of the event with a smirk on his face. However, as the crowd grew, Russian security guards could be seen eyeing protesters.

A member of the Metropolitan Police Department, which was monitoring the event, approached the side entrance of the embassy for a conversation with a Russian embassy official.

The police officer then asked protestors to leave enough space for vehicles to enter the compound.

Ihor Samokish, who wore a black pea coat with a pin that read “Russia Sucks” and carried a Ukrainian flag, said he was a lifelong activist.

Mr. Samokish said his family had all been activists. He said his father ran a Ukrainian radio show and his mother was involved in the Helsinki Group. When asked what he hoped to achieve outside the embassy, Mr. Samokish spoke about the need to inform the world about events in Ukraine.

“We just want to keep people aware of what’s going on,” Mr. Samokish said. “We get to a point where people get numb [to the news]after a while. It’s not just Ukrainians who should be worried.”

Many protestors said they wanted to show their support for Ukraine and come together as a community.

At one point, a man with a gray beard and determined look on his face spoke through a megaphone to condemn Russia’s aggression against Ukraine. The man, George Sajewych, took part in the Euro-Maidan protests in Ukraine in 2014.

“It was the greatest experience of my life,” Mr. Sajewych said. “I’d never seen that kind of self-discipline and idealism and courage,” he recalled of the protests in Kyiv at that time.  He said that, while he originally planned to stay in Kyiv for a brief time, he had then decided that “I’m going be here. I’m going to be here until the end.”

Mr. Sajewych said he joined a volunteer self-defense group in Kyiv’s Independence Square. His group was later met by thousands of security forces who attacked them with batons. He survived, but just barely. He suffered concussions and a broken wrist.

“I came very close to being killed,” Mr. Sajewych recalled while chuckling. “The only thing that saved me was this motorcycle helmet. But they were swinging those batons to kill.”

Mr. Sajewych recalled that, at one point in the night, as he lay on the ground bleeding profusely from his head wound, a Berkut office with baton in hand approached him. The officer smirked at the man lying in a pool of his own blood and taunted him.

“So, you wanted your Ukraine, huh?” Mr. Sajewych recalled the man saying to him in Russian. He said he will never forget that moment.

Despite the encounter, Mr. Sajewych said he is undeterred by the violence and continues to support Ukraine through various volunteer organizations.

As the rally wound down and people dispersed, Mr. Samokish spoke about his hope for the situation in Ukraine.

“What I hope will happen is that everything will calm down, and we will all go on our merry way. I don’t think [Russia] will invade. … I hope they don’t invade. … But if they did, if I was younger, I would go over there,” Mr. Samokish said.