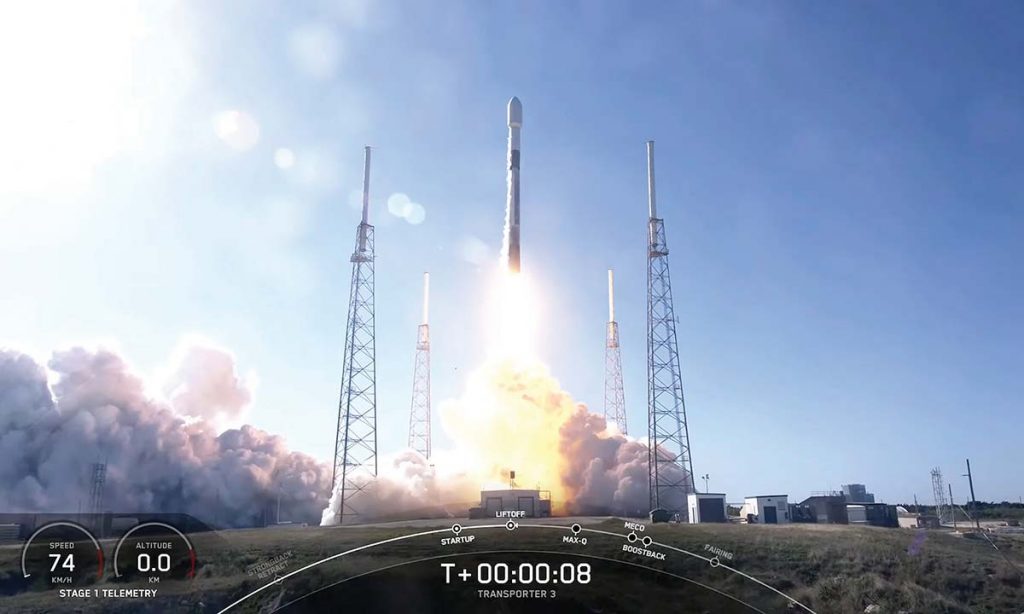 SpaceX livestream via YouTube
A screen shot of a video shows the launch of a SpaceX Falcon 9 rocket that carried the Ukrainian satellite Sich-2-30 into space from the launch facility in Cape Canaveral, Fla., on January 13.

KYIV – Riding a SpaceX Falcon 9 rocket launched from Cape Canaveral, Fla., Ukraine sent its first satellite in a decade to space on January 13.

The optical satellite Sich-2-30 was designed to capture digital photos of the Earth’s surface. More specifically, the satellite, which was designed at the Pivdenne (also known as Yuzhnoye) Design Bureau in Dnipro, Ukraine, will monitor land use, vegetation, forests and water resources. It will also keep an eye on the movement of military troops, equipment and ships, according to Ukrinform.

“The purpose of the Sich-2-30 satellite is to monitor the use of land, vegetation, forest and water resources. Also, the government can use it to eliminate the consequences of natural disasters. At the same time, it will allow obtaining high-quality data on the creation of engineering structures, movement of military equipment and ships, etc.,” said Volodymyr Taftay, head of the State Space Agency of Ukraine.

Ukraine sent its last satellite, Sich-2, into orbit in August 2011 with the help of the Dnipro-1 launch vehicle, which was built at the Ukrainian Pivdenmash factory with the involvement of several Russian companies. That launch took place at a base in the Orenburg region of Russia.

Sich-2 was expected to operate for five years, but Ukraine lost contact with the satellite in December 2012, just over a year into its planned mission. Scientists later discovered the problem was caused by a Russian-made battery. Ukraine has not had its own satellite in orbit since Sich-2 failed in December 2012.

According to Ukraine’s State Space Agency, the development of the Sich-2-30 satellite began in 2017 at the Pivdenne Design Bureau. The bureau designed, tested and prepared the satellite, which weighs nearly 400 pounds, for commissioning.

Images from the satellite will be sent to the Flight Control Center, which was previously located in Yevpatoria, Crimea. The center was moved after Russia illegally annexed the Crimean Peninsula in 2014.

The Flight Control Center is now located near the city of Dunayivtsi in the Khmel­nytsky region of Ukraine. The location is also home to the Center for Receiving and Processing Special Information, which will receive data from the satellite.

Government agencies will receive images from the spacecraft free of charge, 24 hours a day. The developers expect the satellite to be operational for at least three years.

Ukraine spends roughly $1.25 million annually to purchase photos from satellites owned by other countries. According to its designers, Sich-2-30 cost approximately $5 million.

The satellite, originally named Sich-2-1 because it was a modified version of the Sich-2 spacecraft, was renamed Sich-2-30 to mark the 30th anniversary of Ukraine’s renewed independence.

Initially, it was scheduled for launch before August 24, 2021, but the launch was postponed. In early December, Ukraine sent the satellite to the United States, and on December 22 SpaceX postponed the launch of the mission until January 13.

Konstantyn Bilousov, chief designer and head of construction at the Pivdenne Design Bureau, who led the development of the spacecraft, said that although Sich-2-30 is a successor to Sich-2, the satellites are not the same.

“This is a direct successor, an upgraded version of Sich-2. But low-quality components have been replaced by high-quality, improved software. We believe that Sich-2-30 will have a longer lifespan,” Mr. Bilousov said.

“Pivdenne Design Bureau has resolved the issue of replacing Russian elements that were previously used for satellites. We bought communication systems and sensors in the EU and Korea. We bought a chemical battery in France from a well-known company that provides the necessary quality. But most of the components are developed in Ukraine,” Mr. Bilousov said.

Launching the satellite with the SpaceX rocket cost Ukraine an additional $2 million, which, according to Mr. Bilousov, was the best and most affordable option.

“I believe that this is the beginning of a new phase of our country’s space program. Thanks to the Ukrainian Sich-2-30 satellite, we will receive information not only from our partners but also from our own satellite. This is very important,” Mr. Zelenskyy said.

The Sich-2-30 satellite will also be involved in the European Union’s Copernicus Earth observation program.

“Sich-2-30 is Ukraine’s first satellite in 11 years. We have already prepared a draft space program, which envisages the creation of a group of eight Ukrainian satellites in orbit by 2025,” Mr. Taftay, the head of Ukraine’s State Space Agency, wrote in a post on Facebook.

The strategic space program is awaiting approval by the Verkhovna Rada of Ukraine, according to Mr. Taftay.

“The launch of the Sich-2-30 satellite is a step toward Ukraine’s return to space. We did everything we could to make this step a success,” Mr. Taftay said.