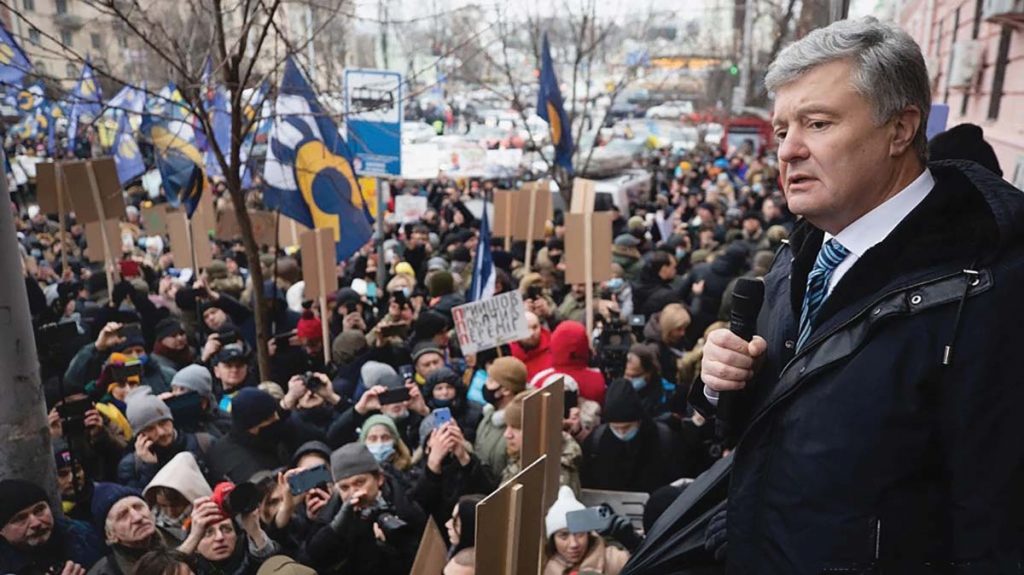 Press service of Petro Poroshenko, via RFE/RL
Petro Poroshenko addressed supporters as he stood in front of the court building in Kyiv prior to a session on January 17.

KYIV – A Ukrainian court has rejected a prosecutor’s request to arrest Petro Poro­shenko in a treason case that the former president rejects as politically motivated.

Mr. Poroshenko appeared in Kyiv’s Pechersk district court on January 19 while hundreds of his supporters demonstrated outside, chanting and waving flags and briefly scuffling with police before the hearing.

Inside, a judge said that Mr. Poroshenko did not need to be remanded in custody, though he should appear before prosecutors and investigators when requested to do so. He was also ordered to stay in Kyiv and had to hand over his passport.

Mr. Poroshenko announced he would appeal the ruling, saying it “hinders” his political activity.

“This is not yet a victory; this is the first step in the right direction,” the 56-year-old said.

After the hearing, Mr. Poroshenko joined his supporters outside the court, and a crowd then began marching toward the president’s office.

The prosecution had requested bail of 1 billion hryvnias ($37 million) as a condition for the release of the ex-president, one of Ukraine’s richest businessmen.

The case has raised international concern, with visiting U.S. Secretary of State Antony Blinken appealing to Ukrainians to “stick together” as the country “faces the possibility of renewed Russian aggression.”

“I think one of Moscow’s long-standing goals has been to try to sow divisions, between and within countries, and quite simply we cannot and will not let them do that,” Mr. Blinken said while meeting President Volodymyr Zelens­kyy on January 19.

The accusations against Mr. Poroshenko are linked to the alleged sale of coal that helped finance Kremlin-backed separatists in eastern Ukraine in 2014-2015 while he was in office.

The billionaire businessman has already had his assets frozen as part of the investigation. He faces up to 15 years in prison if convicted.

Mr. Poroshenko, who is now a lawmaker and the leader of the opposition European Solidarity party, accuses his successor, Mr. Zelenskyy, of political persecution.

The former president and his allies say the case was cooked up by allies of Mr. Zelenskyy, and accuse him of promoting political division at a time when the country is bracing for a possible Russian military offensive.

Mr. Poroshenko was elected as head of a pro-Western government after popular protests ousted pro-Russian former President Viktor Yanukovych in 2014.

Mr. Zelenskyy crushed Mr. Poroshenko in the 2019 election on pledges to fight corruption and curb the influence of oligarchs.

(With reporting by Reuters and AFP)