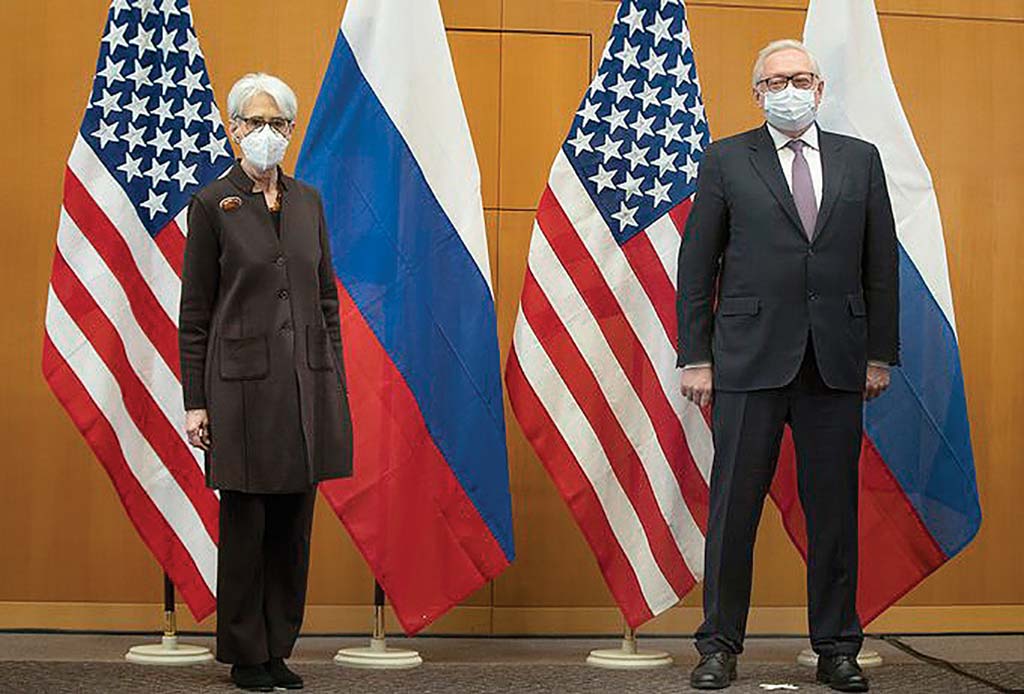 About 100,000 Russian troops armed with heavy weaponry and positioned along its borders have “a gun pointed to Ukraine’s head,” U.S. Secretary of State Antony Blinken said ahead of the first round of talks in Geneva between U.S and Russian officials.

The military presence, unannounced and without a stated purpose since last April, have led to fears of Russia further invading Ukraine. A war there is entering its ninth year and has cost some 14,000 lives.

The Russian military deployment preceded two draft treaties that Moscow released in December, and which outline demands for a drastic rollback of NATO’s presence in eastern Europe, including guarantees that Ukraine would not join the organization and end cooperation with the defense alliance.

In turn, the U.S. is threatening a more “severe” set of punitive sanctions should Russia escalate the war that it has fueled in eastern Ukraine and elsewhere in the country.

The talks, which started on January 9 and ended on January 13, were inconclusive and the parties remained deadlocked, though the U.S. did not make any concessions.

In the aftermath of the talks, no de-escalation was noticed along Ukraine’s international borders with Russia, while the latter held live-fire military drills in three neighboring regions that involved 3,000 troops on January 11.

After the latest round of talks, which took place on January 13 in Vienna where the 57-member Organization for Security and Cooperation in Europe (OSCE) is based, U.S. envoy Mike Carpenter said no progress was made beyond dialogue for cooling tensions.

“There is a crisis in European security. The drumbeat of war is loud and the presence of live-fire Russian exercises is raising questions,” the high-ranking U.S. diplomat said in a question-and-answer session in which The Ukrainian Weekly participated.

The OSCE’s first meeting of the year was the only one of three discussions in which Ukraine participated as Kyiv has insisted that nothing be decided about Ukraine without the country’s inclusion in talks.

Entering the series of talks, U.S. diplomats and NATO representatives from the 30-member alliance, which hosted the second round of discussions on January 12, all expressed having little expectation for a breakthrough with Russia, which has threatened to use additional military force if its “security guarantees” aren’t met.

Never has Moscow, as part of its conditions, promised to remove its troops from the Moldovan breakaway Transdniester region. Nor has it made a similar promise for Georgia, which it invaded in 2008, or Ukraine’s Crimean Peninsula and parts of the two easternmost regions of Luhansk and Donetsk, which it invaded in 2014.

When Russia invaded that year, Ukraine’s official foreign policy stance was non-aligned and support for NATO accession was in the single digits, whereas today, public opinion polls in Ukraine consistently show that support exceeds 50 percent.

After eight hours of talks with Russian Deputy Foreign Affairs Minister Sergey Rybakov in Geneva and at the NATO-Russia Commission in Brussels, U.S. Deputy Secretary of State Wendy Sherman said “there was no commitment [from the Russians]to de-escalate nor was there a statement that there would not be,” to which she added, “that is why collectively we are preparing for every eventuality.”

Back in Moscow, Mr. Ryabkov told state-run RTVI that the “U.S. and NATO are not ready to meet our key requirements.”

Russian business newspaper Kommer­sant quoted him as saying that he doesn’t see justification for follow-up meetings with U.S. officials or NATO.

“Without clarifying whether there is at least some kind of resource, some margin of flexibility on the other side on some serious issues, I see no reason to sit down in the coming days, gather again, and start these same discussions,” Mr. Ryabkov said.

Noting that NATO won’t alter its “open door” policy for membership, the alliance’s secretary general, Jens Stoltenberg, told journalists after the four-hour meeting that “significant differences” remain on both sides and they “will not be easy to bridge.”

They include complaints from Russia that Ukraine isn’t meeting its commitments to the so-called Minsk Agreements, a roadmap to find peace in the Russo-Ukrainian war that was brokered twice by Germany and France.

On both sides in the Donbas region, a complete ceasefire must be established, heavy weapons and foreign troops are supposed to be withdrawn, and local elections are to be held, among other stipulations.

Russia accuses Ukraine of not following through on its end, while U.S. Ambassador to the OSCE Mr. Carpenter says Russia isn’t.

Ukraine “has taken extensive measures toward that end [meeting the requirements of the Mink Agreements], but the ball is in Russia’s court [to do its part], … it depends on the political will on the side of Moscow,” Mr. Carpenter said.

Ahead of the series of talks on January 9, protests to voice opposition to Russia’s unilateral demands on Ukraine were held in Kyiv, Chicago and Washington D.C.

The U.S. Congress has also proposed additional bills to punish Russia and elevate Ukraine’s status within NATO, which Kyiv aspires to join. Ukraine is also looking for closer cooperation with the alliance and is looking to procure from NATO members more arms for defense against its better equipped neighbor.

In late December, CNN reported that the administration of U.S. President Joe Biden quietly released another $200 million in military aid to Ukraine.

Democratic U.S. Senators also unveiled a new bill on January 12 that would sanction Russia should it further invade Ukraine and re-apply sanctions on the Russian Nord Stream 2 natural gas pipleline that connects to Germany.

Meanwhile, Voice of America reported that Republicans in the House of Represen­tatives are preparing a bill that contains a provision to have Ukraine instated as a “NATO plus” member, which would accelerate the process of selling and transferring defense materiel to Ukraine.