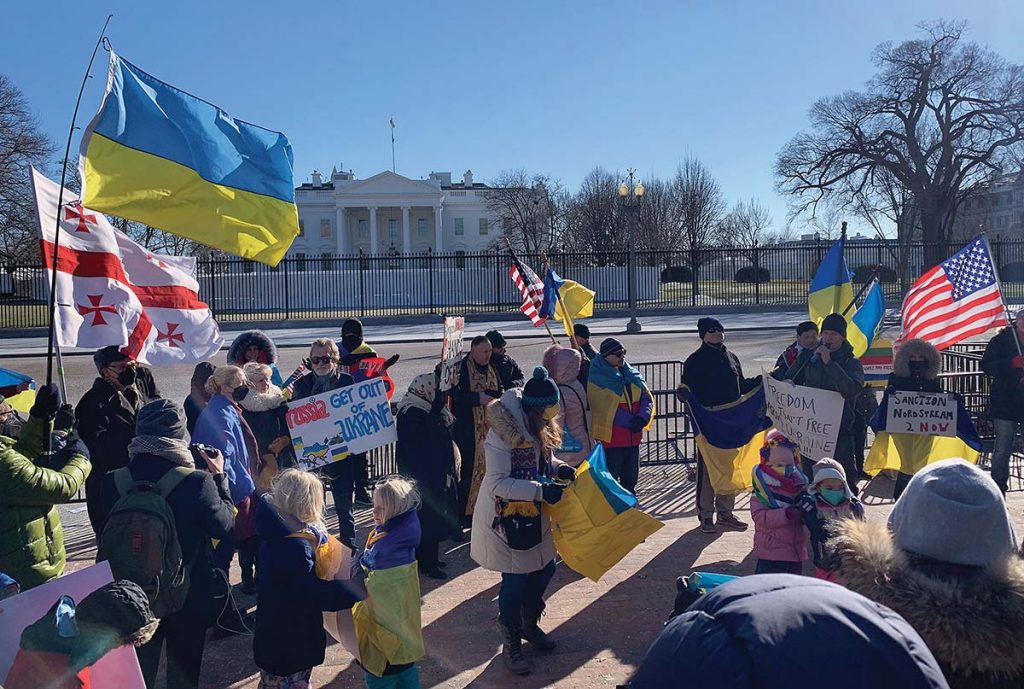 Zachary Dmyterko
Hundreds of protestors gathered despite cold and wind to demonstrate their support for Ukraine during a rally in front of the White House on January 29.

WASHINGTON – Over one 150 activists and supporters of Ukraine protested outside the White House on January 29 in an effort to demonstrate their backing of Kyiv amid Russia’s buildup of some 140,000 troops along Ukraine’s border.

The Ukrainian supporters were joined by a multitude of protestors hailing from Belarus, Georgia, Kazakhstan, the United States and the Baltic Republics.

The wide range of activists joined together to show a unified front of citizens firmly against Russia’s aggression toward Ukraine and Russia’s neighbors. Their overriding goals was to convince the White House and U.S. President Joe Biden to take a hard line against Russia, which has waged a war in eastern Ukraine that first began in 2014.

The activists outside the White House came with three clear goals for the Biden administration. First, they sought to express the unity of the communities of the Baltic States, Ukraine, Georgia, Belarus, Kazakhstan, and the Free Russia Found­ation. Second, they demanded meaningful and potent sanctions as a deterrent against further Russian aggression. And, finally, they called on the White House to immediately provide Ukraine with defensive weapons.

The protestors, however, did not specifically call for military intervention by NATO or an escalation of the conflict.

Despite the continued buildup of Russian forces, now numbering nearly 140,000 soldiers, the U.S. and Russia have remained engaged in diplomatic talks.

The U.N. Security Council convened several times in January to discuss the ongoing war, with Russia denying any responsibility for the current situation.

The event outside the White House was spearheaded by Yaro Hetman, who helped plan the protest and was also the first speaker.

Microphone in hand, Mr. Hetman recalled World War II and the policy of appeasement taken by the Western Allies against Axis powers in their aggression against Manchuria and Czechoslovakia.

“We all know how that ended,” said Mr. Hetman poignantly, drawing parallels between the current geopolitical situation and the situation of the late 1930s.

“The lesson here is this, when dictatorial regimes start taking actions like this, initially it’s like treating cancer. The earlier you start opposing cancer, the less costly and less painful the treatment. By allowing these two dictators [Hideki Tojo and Adolf Hitler] to continue their actions, it only led to a further problem,” Mr. Hetman said.

Mr. Hetman then aimed his appeals directly to the American people, holding up the example of America’s revolutionary struggle against the British, saying it was akin to Ukraine’s struggle against Russia.

“But there was a brave man from France, the Marquis de Lafayette,” Mr. Hetman said as he stood in the square named after the Frenchman, Lafayette Square.

“Look at him alone and the impact he was able to make,” Mr. Hetman said in an effort to inspire the crowd.

The appeal for increased arms to Ukraine aligns with current U.S. and allied policies. Since December, Western powers have increased military and non-military aid to Ukraine. Three air shipments arrived from the U.S. in the past week as part of a new $200 million package which included antitank weapons. The U.S. has also said it would transfer five Russian-made Mi-17 transport helicopters to Ukraine.

Viktoriia Savchuk, a student from Ukraine who is currently completing doctoral degree in communications at the University of Maryland in College Park, Md., was one of the Ukrainian voices in the crowd.

“My family in Ukraine is trying to live a normal life, but there is still a lot of anxiety,” Ms. Savchuk said. “I was in Ukraine last week, and everything feels normal, but it’s not quite normal. I feel like people are trying to talk less about the war, but everyone understands what’s happening, and they’re worried. It’s difficult to predict [what will happen].”

She added that there isn’t a massive panic. Instead, people there understand there is a mobilization of troops and people are checking shelters, helping the military and joining municipal self-defense forces.

“We saw what happened in 2014. We didn’t believe that things like that would happen in the 21st century, that someone could invade another country in Europe,” Ms. Savchuk said. “But it happened. That’s why I don’t want to underestimate what Russia’s doing right now near the Ukrainian border.”

Many at the event also emphasized their gratefulness toward the Biden administration for its recent support of Ukraine.

Yana Chapilo, a current Fulbright Fellowship student from Ukraine studying at the University of Maryland in College Park, Md., was one of many who expressed their gratitude.

“We gathered to show our support to our fellow Ukrainians and also to show the government of the United States and President Biden that we are grateful for their support,” Ms. Chapilo told The Ukrainian Weekly.

Both in geopolitics and at the protest, the multi-national response to Russia’s war in Ukraine has become more visible as tensions have risen. Yet many, such as Georgian activist Giorgi Lomaia, stood out at the protest as an international voice that has steadfastly supported Ukraine since 2014.

“Today we have gathered in front of the White House to support free and independent Ukraine in the face of an imminent Russian aggression,” Mr. Lomaia said in his speech to protestors outside the White House.

“Not long ago, Georgia was in the same shoes. In 2008 Georgia wanted to be free and independent and dictate its own fate. And Russia invaded us,” Mr. Lomaiev said. “It is time for the Western World to stand tall and stand firm against the Russian aggression.”

The shared struggles against Russia unite the Georgian and Ukrainian people in purpose, Mr. Lomaia said.

“The brotherhood is strong, and it’s unshakable,” Mr. Lomaia told The Weekly.

“The Georgian community stands with the Ukrainian people. Millions of Georgian men and women are thinking and praying about Ukraine. Hundreds of Georgians have fought alongside Ukrainians and have given up their lives in Ukraine, as have Ukrainians in Georgia in the 1990s and 2008. Please do not judge Georgia based on our government’s reaction and silence,” Mr. Lomaia urged the crowd here.

Mr. Lomaia further spoke during an interview with The Weekly of the shame he feels for his government’s silence on the events.

That silence “misrepresents what a majority of Georgians want” and it demonstrates that “Georgia is being brought back into the Russian sphere of influence,” Mr. Lomaia said.