Research provides data on number of Ukrainians in U.S. and cities

Ukraine is constantly in the news these days, and many of us are being interviewed by television, radio and print journalists. One question that comes up often during these interviews is how many persons of Ukrainian ancestry live in a given state or city, and how many of them are recent immigrants from Ukraine. The Center for Demographic and Socioeconomic Research of Ukrainians in the U.S. (Center) of the Shevchenko Scientific Society can provide these data for every state and most metropolitan areas.

Table 1 lists the number of persons of Ukrainian ancestry in each state and the District of Columbia. It also includes the number of Fourth Wave immigrants and their percentage of all Ukrainians in the state. There were 1,128,000 persons of Ukrainian ancestry in the United States in 2018, the latest year for which there is data. The recent immigration wave from Ukraine, also called the Fourth Wave, makes up 28 percent of all Ukrainians. New York has the largest number of Ukrainians with 170,000, followed by California with 135,000 and Pennsylvania with 111,000. Together with New Jersey, Washington state and Florida, these six states account for 55 percent of all Ukrainians in the U.S. 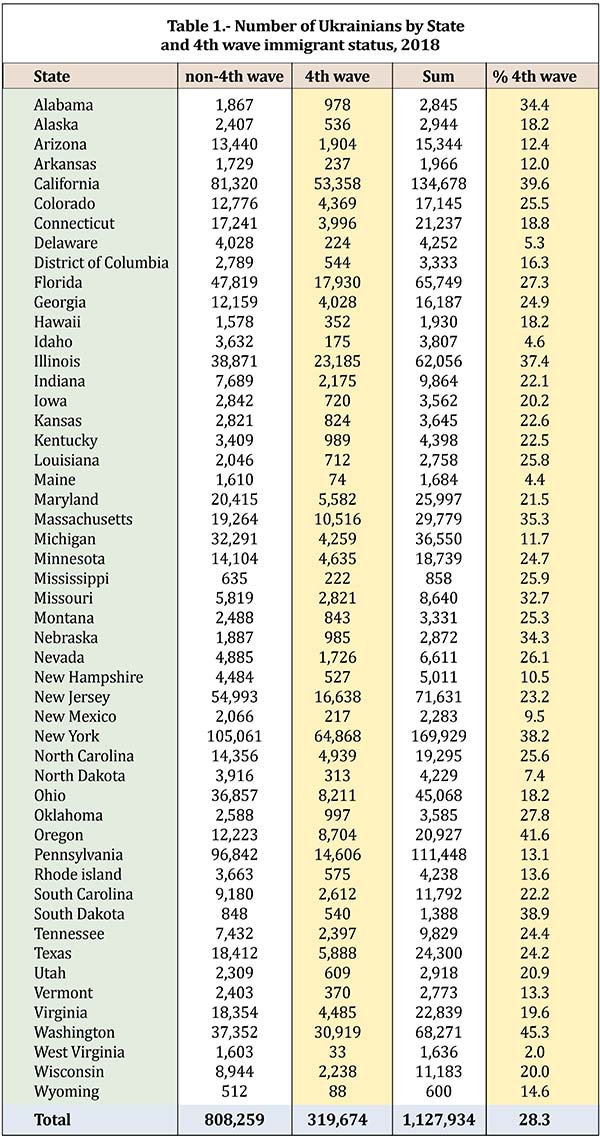 Table 2 lists Metropolitan Areas (M.A.s) with at least 5,000 Ukrainians in 2018. The New York Metropolitan Area has the largest number of Ukrainians with 174,000, followed by 114,000 who live outside any M.A. Chicago and Philadelphia M.A.s have about 60,000 Ukrainians each. Seattle, Los Angeles, and Sacramento have nearly 40,000 each. More than half of all Ukrainians are Fourth Wave immigrants in Sacramento and Jacksonville, Fla., followed by Seattle with 49 percent. 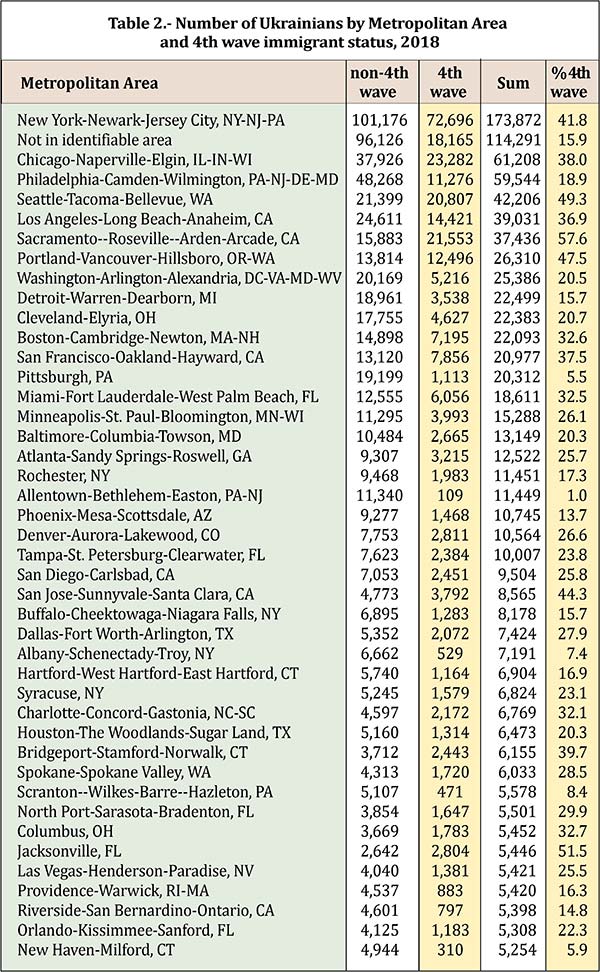 Data on Ukrainians in the U.S. are based on the following questions from the yearly American Community Surveys (ACS): a) what is this person’s ancestry; b) country of birth; c) language spoken at home besides English; d) year of immigration to the U.S. The ancestry question allows one to provide one or two ancestries when a person has mixed ancestry. Using these data, we define Ukrainian as a person who satisfies at least one of the following criteria: a) answered Ukrainian as the only, first or second ancestry; b) was born in Ukraine; c) speaks Ukrainian at home. Recent immigrants (Fourth Wave) are defined as persons born in Ukraine and arrived in the U.S. after 1987.

More detailed current data on Ukrainians in the U.S. can be found at the Center’s website, http://www.inform-decisions.com/stat, in the section “2018 data.” The website has an expanded version of Table 2 that includes data on Metropolitan Areas with 500 or more Ukrainians. As midterm elections are approaching, data in the section “voting statistics 2020” may interest some readers.

A few comments on the timeliness of the data are in order. Data on ancestry became available for the first time in the 1980 census, and the same questions were asked in the 1990 and 2000 censuses. Starting with the 2010 census, the ancestry question and many other questions were eliminated from the census and included in the American Community Survey questionnaire. This national survey has been conducted yearly since 2005. The survey has a representative sample of about 2 percent of the U.S. population. This means that the potential number of Ukrainians captured in the sample is small. We take the average from three consecutive yearly surveys to reduce sampling error. Thus, the 2018 data is the average of 2017, 2018 and 2019. The next update, scheduled for 2020 and requiring data for 2019, 2020 and 2021, is problematic for two reasons: a) data from the 2021 survey is not available yet; b) the 2020 and 2021 surveys have been affected by the COVID-19 pandemic and the quality of the data may be questionable.

Our hopes for the 2020 census data turned out to be disappointing. For many years the Bureau of the Census had questions on race and ancestry. For some reason, the question on ancestry was eliminated in the 2020 census and we only have the question “what is this person’s race”? One can select white and then write in Ukrainian or, if appropriate, select black or American Indian and write in Ukrainian. There are at least two problems with estimating the number of Ukrainians using this question. First, race and ancestry are different concepts. Ukrainian is not a race and asking for race may confuse some people. Some respondents may not have answered the question or provided an incorrect answer. Second, the question does not have the option of offering two ancestries. This is likely to reduce the number of Ukrainians. On top of that, the Bureau of the Census is having difficulty processing the census data, as it has been seriously affected by the COVID-19 pandemic. It seems that it will be a while before we have reliable data for 2020.

The census and American Community Survey are the primary data sources on Ukrainians in the U.S. Although sometimes a data set may have some problems, the Bureau of the Census strives to produce quality data. Federal and state agencies and private businesses and civic organizations use these data for decision-making involving millions of dollars. They can also be helpful for Ukrainian companies and civic and religious organizations.

Oleh Wolowyna is the Director of the Center for Demographic and Socioeconomic Research of Ukrainians in the U.S. at the Shevchenko Scientific Society.