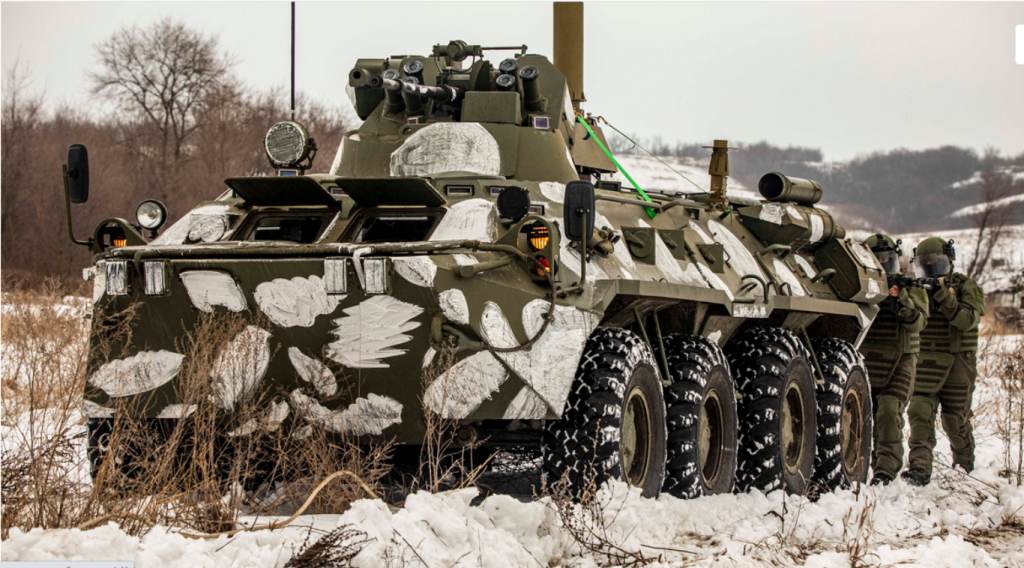 Russian Defense Ministry
Units of a Russian engineering regiment of the combined arms army of the Western Military District held tactical exercises while exiting the field.

KYIV – As Russia announced that some of its troops near Ukraine’s state borders are returning to their permanent deployment bases, the Kremlin-dominated legislature sent two resolutions to President Vladimir Putin desk asking him to recognize two puppet regimes in occupied eastern Ukraine as independent.

Russia is holding large-scale military drills in Belarus, the Black and Azov seas and has amassed nearly 150,000 troops adjacent to Ukraine. The drills are scheduled to wind down on February 19-20. The Russian Defense Ministry’s announcement also coincided with a visit the same day by the German chancellor to Moscow for a meeting with Mr. Putin.

“As the combat training measures are completed, the troops … will make marches in a combined way to their permanent deployment points,” said Maj. Gen. Igor Konashenkov, the Russian Defense Ministry’s spokesperson on February 15.

Its speaker, Viacheslav Volodin, said the two resolutions differ in that one directly appeals to Mr. Putin to “immediately” recognize the occupied areas as independent, “while the second was to be sent to Russia’s foreign affairs ministry and other government structures ‘for study and feedback,’” Euronews reported.

Some military analysts were skeptical of Russia announcing a drawdown of troops.

In the past, previously announced “withdrawals meant more Russian troop deployments near Ukraine,” tweeted Konrad Muzyka, a Polish expert at Rochan Consulting. “New trains with equipment keep on arriving. The withdrawal would be a welcomed development, but recent history tells us these announcements are not genuine. Need a few days to verify.”

If Russia recognizes the two installed governing administrations in Luhansk and Donetsk, it would be in violation of the so-called Minsk agreements, which call for local elections and special status for the two regions. The occupied parts represent about 3 percent of Ukraine’s territory in addition to 4 percent that Russia occupies in the Ukrainian Peninsula of Crimea that Moscow forcibly seized in 2014.

Russia has numerous times insisted it doesn’t intend to further invade Ukraine ever since it started amassing troops and various arrays of heavy weaponry adjacent to Ukraine’s borders last year.

Others believe Russia’s recent announcement to be a smokescreen.

Maria Zolkina, a political analyst at the Kyiv-based Democratic Initiatives think tank, deemed Russia’s move as not “real de-escalation.” She added that “Russia can imitate [a]withdrawal … to show “’good will.’”

She posited that Russia is poised to most likely “launch [a]hybrid attack scenario” to offer plausible deniability while saying that the notorious Wagner mercenary group “is skilled for that.”

Three senior Western security sources told Reuters in a February 14 dispatch that “Russian mercenaries with ties to Moscow’s spies have increased their presence in Ukraine in recent weeks, stoking fears … that Russia could try to engineer a pretext for an invasion.”

The United States warned on February 13 of a second Russian “false flag” operation that could be used as justification to further invade Ukraine.

“It is likely that Russian mercenaries, under the direction of the Russian state, will be involved in any hostilities in Ukraine, potentially including a pretext for an invasion,” Reuters reported.