Russia to start naval drills, cutting Ukraine off from Black and Azov seas 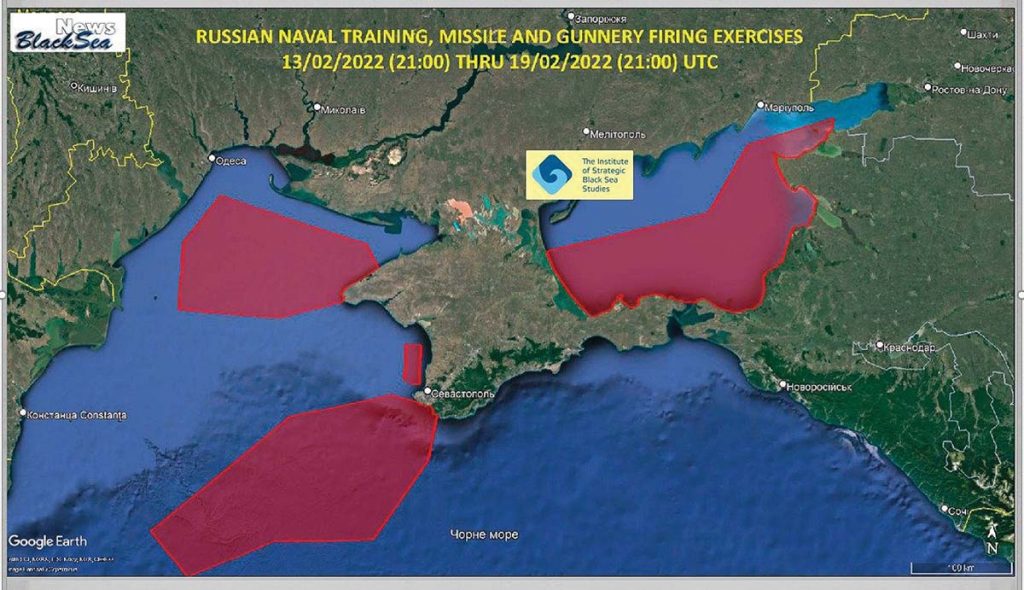 Institute of Strategic Black Sea Studies
Russia will for the first time block commercial navigation routes in both the Black and Azov seas on February 13-19 while it conducts naval drills.

KYIV – This week, Russia further escalated the security situation in Ukraine by massing more troops adjacent to its border with Ukraine and announcing naval drills that will halt maritime shipping lanes, which Kyiv relies for trade, in both the Black and Azov seas.

The game of brinkmanship, with Russia gradually ramping up aggression and the West threatening severe restrictive measures, has so far worked to Moscow’s advantage and has come at seemingly minimal cost to Russian President Vladimir Putin.

The moves come despite Ukraine urging the West to impose preemptive sanctions as a massive invasion force of Russian troops builds along Ukraine’s border. That buildup coincides with 10-day military drills involving 30,000 Russian soldiers and heavy weaponry in neighboring Belarus that are scheduled to end on February 20.

Ukrainian Defense Minister Oleksiy Reznikov announced that Ukraine is carrying out parallel military exercises across the country during the joint drills. Those drills will be conducted in various regions of Ukraine, but they will notably also take place in Chernihiv Oblast, which neighbors Belarus.

Mr. Reznikov said that 10,000 more Russian troops this week were added to accumulating forces near Ukraine’s border. The total is now 140,000 soldiers or 72 battalion tactical groups (BTG) – 11 of which are in Belarus. Some Western military experts have placed the number of BTGs at 80.

Western intelligence has noted that, in addition to the ongoing military buildup, Russian troops are moving into the area from further assembly locations and they are coming to staging points that are as close as 40-50 kilometers (25-31 miles) from Ukraine’s state border. These are in addition to permanent forces in the occupied parts of the easternmost Luhansk and Donetsk regions and the illegally annexed Crimean Peninsula. Russia occupied them in 2014 in an ongoing war that has killed more than 14,000 people.

Meanwhile, Ukraine continues receiving shipments of defensive weapons and gear, mainly from the United States and Britain, as high-profile diplomatic crisis talks continue. The aim of those talks is to deescalate the situation and deter Russia from a further invasion of Ukraine.

A tenth planeload of U.S. weapons arrived on February 9, bringing 80 tons of ammunition, Mr. Reznikov said. It’s part of a new $200 million package that was approved this year by U.S. President Joe Biden. Britain shipped military-technical assistance, adding to anti-armor weapons that arrived earlier this year. Poland has also provided Soviet-designed modernized air-defense systems to help bolster Ukraine’s weakest area in fending off a full-scale invasion that would likely include a naval assault.

Since Russia started massing troops near Ukraine, Kyiv has received about $1.5 billion in military assistance from the U.S., Britain, Canada, Poland, Germany and the Czech Republic, Prime Minister Denys Shmyhal said on February 9.

The so-called air bridge of defensive weapons is designed to also raise the costs of another invasion and shave layers off Russia’s military superiority.

Billions of dollars of additional macro-economic assistance have been pledged or provided as well.

French President Emmanuel Macron, during a visit to Kyiv on February 8, the first by a French head of state since Jacques Chirac came 24 years ago, announced that Paris would provide an additional $1.7 billion in funding for joint projects. Over $1 billion was pledged in the form of loan guarantees. The EU previously announced 1.2 billion euros in funding.

Ukraine has been cut off from credit markets ever since Russia started raising the volume of military threats toward Ukraine, which have been based on security demands made in December that Kyiv stop cooperating with NATO and stop receiving outside weapons from alliance member states.

There is little demand for new Ukrainian Eurobonds and the country’s bond yields are at 11 percent. With inflation at 10 percent, Kyiv has relied on direct financial aid from its partners.

Since Russia invaded in 2014, the war has cost Ukraine’s economy $280 billion in potential output through 2020, the London-based Center for Economics and Business Research said on February 10.

Russia plans for the first time to enforce a ban on all civil and merchant maritime navigation in the Black and Azov seas, which Ukraine uses for sea trade and shipping. They are part of naval drills taking place on February 13-19.

The maneuvers could be considered an act of aggression based on the definition of the word outlined in U.N. resolution 3314, which says the blockade of ports or coasts of a state by the armed forces of another state, regardless of a declaration of war, constitutes “aggression.”

Defense Minister Reznikov called the naval drills “a tactic of creeping occupation of the sea, which they [Russia] has long used.”

Western diplomatic visits to Moscow and Kyiv and meetings in Washington have continued in an effort to deescalate the situation.

Mr. Scholz is scheduled to visit Kyiv and Moscow next week.

After holding five-hour talks with Mr. Putin on February 7, Mr. Macron flew to Kyiv the next day for discussions with his Ukrainian counterpart.

The longtime Kremlin spokesperson did confirm that both sides agreed that a roadmap for peace, known as the Minsk Agreements, are the only way to stop the war in eastern Ukraine.

Russia still denies involvement that it fuels the war it started in 2014 by leading armed formations, training and equipping them, as well as having Russians fight beside local collaborators.

The second and last Minsk agreement between Russia and Ukraine was brokered by Germany and France in 2015. Moscow and Kyiv have diverging interpretations of the agreement’s provisions and the sequence of events needed for implementation.

One provision, for example, stipulates that the two Donbas regions of Luhansk and Donetsk are to be given “special status,” which Russia insists means autonomy, and for those two provinces to have veto power over Ukraine’s main foreign policy decisions.

Ukraine disagrees, as do some of its allies.

The U.S. on February 8 tweeted that “Russia pushes a distorted interpretation of the Minsk agreements, including insisting on ‘autonomy’ for Russia-controlled Donbas. Nowhere in the Minsk Agreements is the word ‘autonomy’ mentioned.”

Afterward, he berated her saying the British delegation came “unprepared” and described the discussions as like “speaking to a deaf person who listens but cannot hear.”

“If there were to be a Russian incursion into Ukraine, the Ukrainians will fight,” Ms. Truss said in remarks as reported by the London-based newspaper The Guardian.

“This would be a prolonged and drawn-out conflict,” Ms. Truss said. “The UK and our allies would put in place severe sanctions targeting individuals and institutions. The United States has been clear that Nord Stream 2 would not go ahead.”