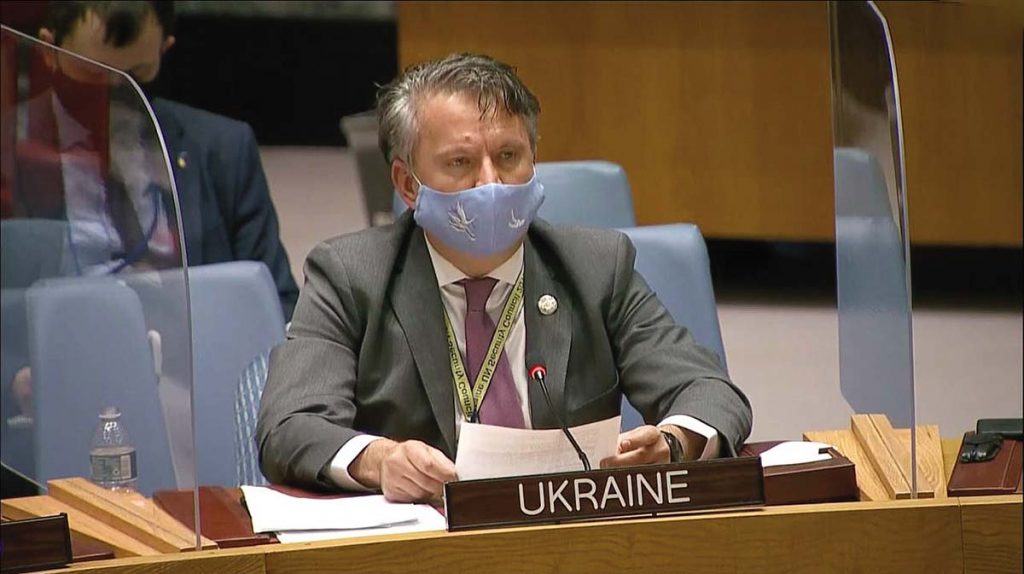 UN Web TV
Speaking during a meeting of the U.N. Security Council in New York City on January 31, Serhiy Kyslytsia, Ukraine’s ambassador to the U.N., told members of the Council that Ukraine was “well aware of Russia’s history of ploys and provocations.”

KYIV – During a contentious meeting on January 31 at the United Nations Security Council in which officials sought to deescalate tensions over Ukraine, the U.S. and Russia traded accusations and each sought to portray the other side as being responsible for the current situation.

Russia has steadily built up a military force of some 130,000 personnel, equipment and heavy weapons along the border with Ukraine (including in Belarus), in the occupied parts of Donetsk and Luhansk, and in Crimea, which Russia illegally annexed in 2014. It is the largest concentration of forces in Europe since the end of the Cold War.

At the Security Council meeting in New York, Russian Ambassador Vasily Neben­zya kicked off a blistering attack, accusing the United States of “provoking escalation” by saying Moscow was preparing to invade Ukraine.

“You’re waiting for it to happen, as if you want your words to become a reality,” Mr. Nebenzya said in remarks directed toward U.S. Ambassador Linda Thomas-Greenfield.

The meeting of the 15-member Security Council, initiated at the request of the United States in coordination with Ukraine, was convened to ask the Russian Federation why it had so dramatically increased its military presence along Ukraine’s borders.

For her part, Ms. Thomas-Greenfield asserted that Russia was “attempting, without any factual basis, to paint Ukraine and Western countries as the aggressors to fabricate a pretext for attack.”

As The Ukrainian Weekly was going to print, The Washington Post reported on February 3 that U.S. officials “say they have evidence that Russia has developed a plan, approved at high levels in Moscow, to create a pretext for invading Ukraine by falsely pinning an attack on Ukrainian forces that could involve alleged casualties not only in eastern Ukraine but also in Russia.

At the U.N., Mr. Nebenzya said Russia was only defending its right to ensure its own security.  He accused the West of bringing “pure Nazis” to power in Ukraine, and of “making heroes out of those peoples who fought on the side of Hitler.”

Ms. Thomas-Greenfield countered by reminding the Security Council of “the pattern of aggression we’ve seen from Russia again and again.”

“What would it mean for the world if former empires had license to start reclaiming territory by force?” she asked.

The confrontation was one of the sharpest in recent memory in an international forum and it marked the start divide that still exists between the different parties in the escalating conflict.

Meanwhile, Serhiy Kyslytsia, Ukraine’s ambassador to the UN, assured the Council that Ukraine is a peaceful country with no intention of conducting armed operations near Russian borders.

“Ukraine is not going to launch a military offensive, either in the Donbas or in Crimea, nor anywhere else,” Mr. Kyslytsia said. “Ukraine sees no alternative to peaceful resolution of the ongoing conflict and restoration of its sovereignty and territorial integrity.”

But Mr. Kyslytsia’s remarks were not heard by the Russian ambassador during the Security Council meeting because Mr. Nebenzya left the meeting before the Ukrainian ambassador began speaking.

The Ukrainian Ministry of Foreign Affairs commented on the issue after the meeting.

“We consider the Russian permanent representative leaving the meeting before its closure not only disrespectful to the issue under discussion, but also as contempt to the U.N. Security Council as a body created to consider threats to international peace and security,” the ministry said.

Mr. Kyslytsia said Ukraine has encountered a surge in Russian disinformation, including false accusations of Ukraine plotting a military attack.

“This is not going to happen. This is direct evidence of Russia’s unwillingness to de-escalate and prepare to justify its possible further aggression,” Mr. Kyslytsia said.

“We are well aware of Russia’s history of ploys and provocations, and we will do everything possible to prevent another Mainila-type provocation by Russia [The Mainila incident was a Soviet provocation used by the Soviet leadership as a formal pretext for starting the 1939 Soviet-Finnish war],” Mr. Kyslytsia said.

Ukraine’s ambassador to the U.N. stressed that Kyiv still has not received credible explanations for its military buildup around Ukraine’s borders.

Ms. Thomas-Greenfield, the U.S. ambassador to the U.N., said it is the largest mobilization of troops in Europe in decades.

“You’ve heard from our Russian colleagues that we’re calling for this meeting to make you uncomfortable. Imagine how uncomfortable you would be if you had 100,000 troops sitting on your border in the way that these troops are sitting on the border with Ukraine,” she said, adding that Russian aggression threatens not only Ukraine, but the whole of Europe and the international legal order, which the Security Council is obliged to maintain.

“If the Russian Federation invades Ukraine, none of us will have the right to say that it was absolutely unpredictable. And the consequences will be terrible,” Ms. Thomas-Greenfield said. “In the wake of World War II, the Council was formed to address precisely the kind of threat that Ukraine now faces.”

Ukraine also received support from the United Kingdom, whose representative to the U.N. reminded the Council that a similar situation occurred 14 years ago during the Russian invasion in Georgia.

“In 2008, at the meeting of the U.N. Security Council, Russia said it was sending peacekeepers to Georgia. In fact, it invaded a sovereign state. In 2014, Russia immediately denied the presence of Russian troops in Crimea while its soldiers were engaged in annexation. Today, Russia denies its troops are threatening Ukraine,” said James Kariuki, the U.K.’s deputy representative to the U.N.

U.N. Under Secretary General Rosemary A. DiCarlo highlighted the “complex and long-standing security concerns and threat perceptions that have been raised” in her speech at the beginning of the meeting.

Meanwhile, the Belarusian representative said that “the Russian-Belarusian military exercises scheduled for February concern only the security of Belarus.”

The United States, Poland, Ukraine, Norway, and Lithuania have called on the United Nations to take preventive action to reduce tensions in Europe and ensure the right of peoples to live in peace.

“We’ve seen evidence that Russia intends to expand that presence to more than 30,000 troops near the Belarus-Ukraine border, less than two hours north of Kyiv, by early February,” she said.

“Based on experience, we cannot believe Russian declarations, but [we can believe]only practical moves on the withdrawal of troops from the border,” Mr. Kyslytsia said.

Russia has insisted that Ukrainian entry into NATO is a red line. Mr. Kyslytsia addressed the issue at the Council meeting.

“Ukraine strongly rejects any attempt to use the threat of force as an instrument of pressure to make Ukraine and our partners accept illegitimate demands,” Ukraine’s ambassador to the U.N. said, referring to Russian demands that NATO never accept Ukraine into the alliance.

He said there is no room for compromise on principal issues for Ukraine.

“The most principled position for Ukraine is that we have inherent sovereign right to choose our own security arrangements, including treaties of alliance, which Russia cannot question,” Mr. Kyslytsia said.

Following the Security Council meeting, Ukraine’s Ministry of Foreign Affairs issued a statement saying that the U.N. meeting was an essential step in preventing a new wave of armed aggression by Russia against Ukraine.

“Despite Russia’s attempt to disrupt the meeting, the Security Council was able to showcase a responsible approach to preventive diplomacy properly,” the ministry said.

“The Russian delegation’s statement that it does not want to see Ukraine in NATO contradicts Ukraine’s inherent sovereign right to choose our own security arrangements,” the ministry said.

Following the Security Council meeting, U.S. President Joe Biden said “the United States presented in detail the full nature of Russia’s threat to Ukraine’s sovereignty and territorial integrity. And we made clear to the international community the full implications of that threat – not just for Ukraine, but for the core tenets of the U.N. Charter and the modern international order.”

The Security Council will meet again on February 17 to discuss implementation of the Minsk agreements. Ukraine says it plans to provide evidence of Russia’s non-compliance with the Minsk agreements, according to Oleh Nikolenko, a spokesman for Ukraine’s Foreign Affairs Ministry.

The U.N. General Assembly will then hold a traditional yearly debate on the “Situation in the temporarily occupied territories of Ukraine” on February 23.