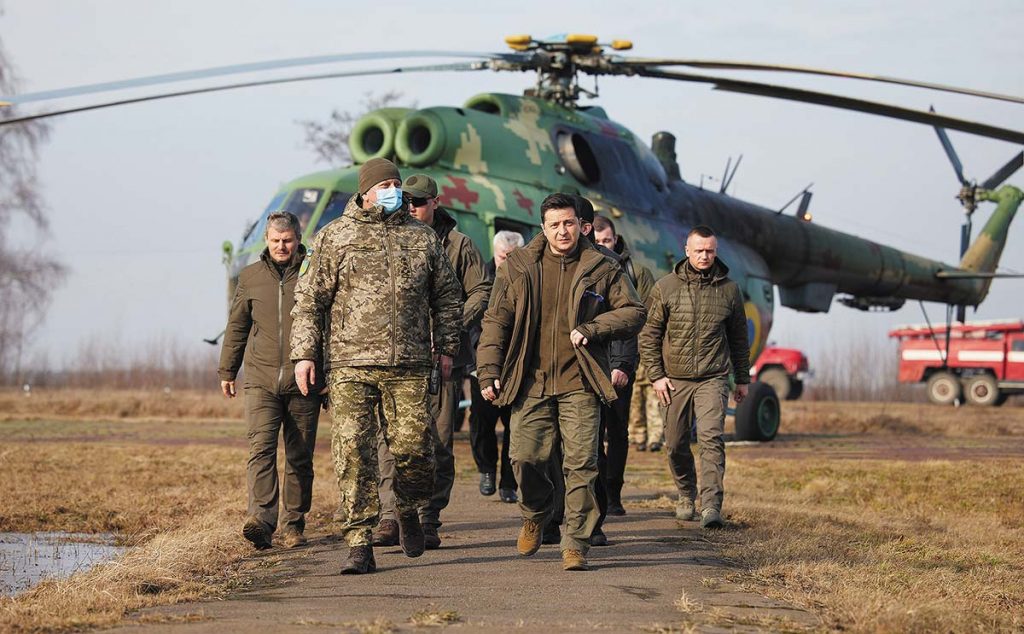 Office of the President of Ukraine
Ukrainian President Volodymyr Zelenskyy is seen after disembarking from a helicopter during a working visit to Rivne Oblast in Ukraine on February 16.

KYIV – Ukraine’s economy is feeling the pressure of Russia’s military buildup as markets adapt and consumers feel the pinch of rising inflation.

As Russia continues to mass a sizable invasion force that is poised to launch a major offensive, Ukraine’s Finance Ministry found itself virtually cut off from credit markets to sell Eurobonds or hryvnia-denominated securities.

The government had to set up a $590 million fund to help ensure flights over Ukrainian skies as some airlines have either reduced or cancelled flights to the country. Billions of dollars of macro-financial assistance from the European Union and Western countries have helped compensate for the pressure.

Apartment and office rental prices are rising in western Ukraine, mostly in Lviv, since some companies and embassies as well as civilians are moving there for its perceived insulation from a possible fuller-scale war with Russia.

Overall, the country’s economic fundamentals are still solid “and there is no panic and Kyiv is really calm,” Serhiy Fursa, deputy director of Kyiv-based Dragon Capital investment company, told The Ukrainian Weekly. “The banking system is doing okay; the hryvnia devaluation is not so big … but inflation is problematic.”

Ukraine entered the year with over $30 billion in hard currency reserves – enough for about five months of imports. Also, public debt is below 50 percent of gross domestic product. Since foreign direct investment has been historically low, Mr. Fursa noted that new investments being cancelled won’t affect the economy that much.

“You can’t lose something if you don’t have it,” he said.

As Russia started surrounding Ukraine from three sides last year with forces that today number about 150,000 well-equip­ped troops, Ukraine’s yearly Eurobond yields have at times spiked to above 10 percent.

This year, Ukraine needs to pay back $8.5 billion in debt and still has $2.2 billion remaining to draw from the Washington-based International Monetary Fund (IMF). Overall, according to Mr. Aslund, Kyiv has so far received $6.4 billion in loans from the United States, EU, Canada, France and other countries.

“If deterrence activity and the threat of war – amplified in the West – undermine the Ukrainian economy, then this too can create a political crisis,” the London-based Royal United Services Institute for Defense and Security Studies said in an analysis of the situation.

And if the Russian threat lingers for months, Ukraine’s economy would feel heightened pressure, which is what Mr. Fursa fears if businesses start relocating out of the country. The information technology sector, which feeds the economy about $7 billion a year, is also a concern, he said.

Last year, Ukraine’s economy was worth almost $200 billion, but inflation coupled with high energy prices ate away at economic growth, slowing it to about 3 percent in 2021.

Rising prices for energy inputs translate to rising costs for food production. For example, as the price of fertilizer has increased, so has the price for dairy products, which ultimately affects the price of consumer goods.

Thus, if Russia’s military pressure lasts for months, “it will harm the economy,” Mr. Fursa said.

This is one reason why Ukrainian President Volodymyr Zelenskyy has called on the West to impose pre-emptive sanctions on Russia.

Ukrainians have felt the economic impact of Russia’s invasion of Ukraine in 2014, when it seized the Crimean Peninsula and parts of the easternmost regions of Luhansk and Donetsk. Kyiv lost valuable offshore oil and gas assets in the Black Sea and lost control of industrial metal mining plants in the Donbas.

Sanctions implemented at that time did not have a significant impact on Russia, but Ukraine ended up losing $280 billion in potential output through 2020 as a result of the ongoing war, the London-based Center for Economics and Business Research said earlier this month.

Mr. Fursa said this economic situation was like “having a neighbor who robbed and beat you, who still smiles in your face and isn’t in jail,” he said. “Now that same neighbor says he will rob and beat you again.”