Ukrainians make their voices heard in solidarity marches around the world 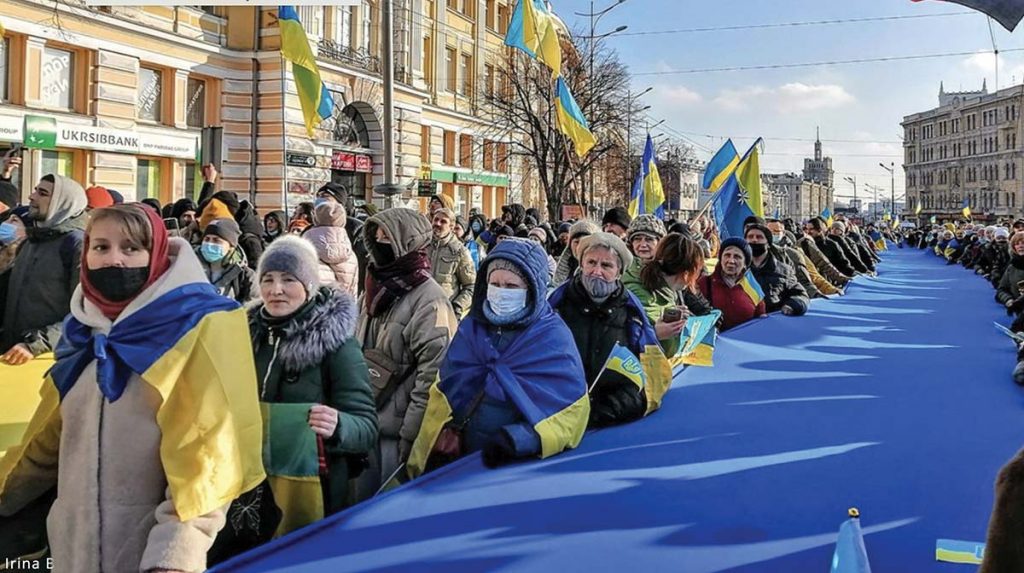 KYIV – As more defense weapons pour into Ukraine from other countries, and neighboring Russia continues massing troops and offensive weaponry, Ukrainians raised their voices around the world during weekend rallies of unity on February 4-6.

Similar rallies took place globally in January and more are slated over the coming weeks, said Mariia Kupriyanova, executive director of the Ukrainian World Congress (UWC), which organized dozens of rallies in North America and Europe during the weekend of February 4-6.

For example, a rally in support of Ukraine in the face of Russian aggression was held in front of the Russian Embassy in Sofia, Bulgaria, as recently as February 9. A civic initiative called the Future with Memory, an alliance of pro-democratic groups and political parties, staged the rally.

As the biggest coordinating body of communities representing 20 million Ukrainians around the world, the UWC called its campaign Stand with Ukraine. Thirty rallies were held over the past weekend in each of Canada’s 10 provinces. Additionally, they were held coast to coast in the United States, from California to New York. In Europe, they took place as far north as Helsinki in Finland and as far south as Milan in Italy.

The aim of the demonstrations is to “consolidate international support,” UWC President Paul Grod told The Ukrainian Weekly.

“We call on all peace-loving nations to say no to [Russian President Vladimir] Putin, provide necessary military and economic support to Ukraine and not force Ukraine to any concessions on its sovereignty, territorial integrity and geopolitical trajectory towards NATO and [the]EU,” Mr. Grod said.

Two recent polls, one in the U.S. and the other conducted in seven European countries, suggest that the Russian president is losing his public relations battle with Ukraine. Over 140,000 Russian soldiers are deployed near Ukraine’s state border while Moscow has been demanding that Kyiv cease cooperation with NATO and stop receiving weapons from the alliance’s member states.

Washington and London fear that Russia could launch a devastating full-scale war against its neighbor “any time.” Such a conflict would come as Ukraine is already mired in an ongoing conflict in eastern Ukraine that has claimed the lives of at least 14,000 people since 2014.

The nationwide U.S. survey, conducted on February 5-6 by Morning Consult and Politico, found that 58 percent of Americans support Ukraine applying for NATO membership. Another 63 percent support “strong sanctions” on Russia.

Sixty-two percent of respondents of the survey, whose sample size represents two-thirds of Europe’s population, say NATO should come to Ukraine’s defense if Russia were to further invade Ukraine. The January poll was commissioned by the European Council on Foreign Relations and was conducted in Finland, France, Germa­ny, Italy, Poland and Romania.

In Kharkiv, Ukraine’s second-largest city situated 40 kilometers south of the Russian border, several thousand people marched in a display of solidarity. A 100-meter-long blue-and-yellow flag was carried through the downtown area on February 5. The rally, which ended in Freedom Square, included banners that read “Kharkiv is Ukraine.”

The city council attempted to ban the march on epidemiological (because of the ongoing COVID-19 pandemic) and physical grounds – law enforcement says Kharkiv is in the second most severe terrorist threat category and has indicated that such incidents are “probable.”

The march’s organizers, however, won two court cases against the city council.

Kyiv’s international community of expatriates held a “unity” march on February 6. Several hundred carrying flags of at least 40 countries started their march at Shev­chenko Park and walked to Indepen­dence Square where they sang the national anthem (see sidebar for more information about the march).

Co-organizer Stuart McKenzie, 51, said the march was “for peace” and to “show our gracious Ukrainian hosts” they are not alone against Russia.

“I participated out of a feeling of powerlessness, facing unbelievable cynicism and aggression from a Russia which can’t seem to make peace with itself, to move on from its imperialistic and past glory,” he said.

Englishman Peter Dickinson, publisher of Business Ukraine magazine, said he attended the event “as an opportunity to demonstrate solidarity with Ukraine at a time when I believe it is important for Ukrainians to know that members of the international community support and admire their efforts to defend their country and stand against Russian aggression.”

Mr. McKenzie and two other co-organizers started the marches during the Euro-Maidan protests of November 2013-Feb­ruary 2014.