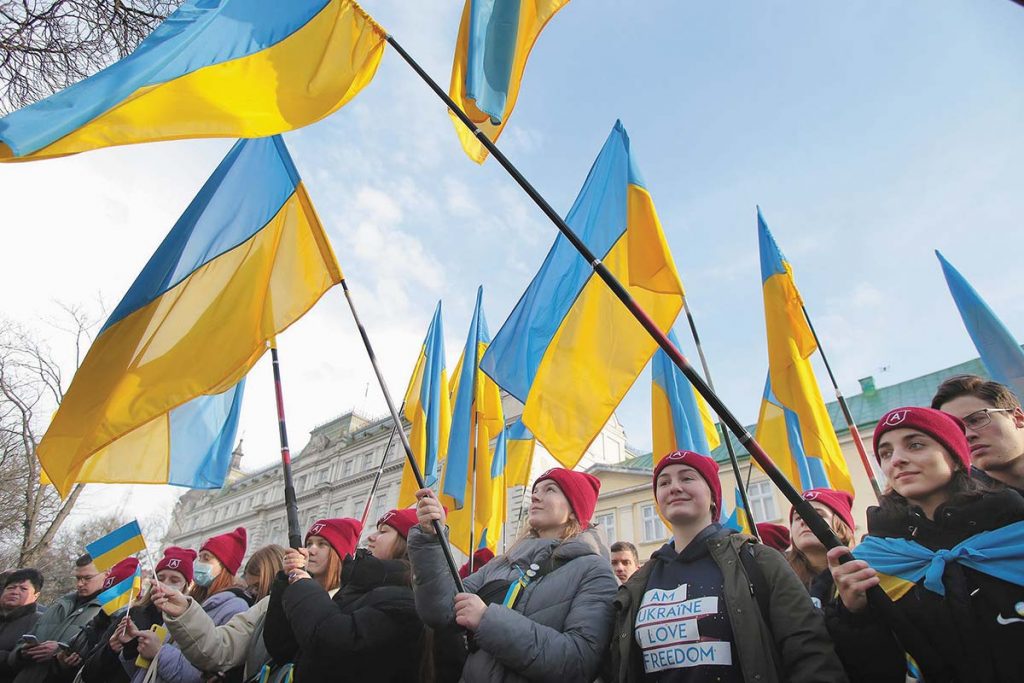 LVIV – Ukrainians around the country united for flag-raising, collective anthem performances and other activities on the newly-established Unity Day on February 16.

Two days earlier, amid news of rising pressure on the border with Russia, Ukrainian President Volodymyr Zelenskyy addressed the nation and announced that he signed the decree on the new national holiday.

“We are told that February 16 will be the day of the attack,” Mr. Zelenskyy said during his address on February 14. “We will make it the Day of Unity. On this day, we will hoist national flags, put on blue and yellow ribbons and show the world our unity.”

Per the president’s decree, the Ukrainian flag must be raised on buildings in Ukraine’s major cities and Ukraine’s national anthem is to be performed at 10 a.m. throughout the country on Unity Day. Ukraine’s foreign embassies are expected to hold relevant events to unite and support Ukraine.

Mr. Zelenskyy said the day was created to strengthen the bonds between Ukrainians, and to help the country unite in its effort to counter growing hybrid threats to Ukraine. Those threats include the use of propaganda, as well as psychological pressure that Russia has tried to use to undermine Ukrainian public consciousness.

In addition, on February 15, the Cabinet of Ministers approved an action plan to mark Unity Day. Prime Minister Denys Shmyhal said that, at Mr. Zelenskyy’s initiative, payments to service members in the Armed Forces would grow by 30 percent starting on March 1. In addition, the financial support for the State Border Guard Service and the National Guard will increase by 20 percent, as of the beginning of 2022.

Following Mr. Zelenskyy’s decree on Unity Day, local authorities began to prepare for the new holiday. Having only one full day to prepare, local governments managed to organize flag-raising events and the signing of the national anthem.

Some regions recommended that all schools within the region should conduct their own events. They suggested that, for instance, individuals wear vyshyvanka (embroidered national shirts) to school, paint patriotic pictures and hold class lessons on unity.

Areas with a high levels of COVID-19 cases held some school events online. One class in Kyiv wanted to record an anthem performed by students, but they sang the anthem five times in a row due to technical issues.

On the Day of Unity, February 16, Mr. Zelenskyy took part in a ceremony that included the raising of the Ukrainian flag. As an orchestra performed the national anthem, an honor guard raised Ukraine’s blue and yellow flag.

“Together we mark the day of unity – the unity of a great people of a great Ukraine! This day is ours for those who live on the right and left banks of the Dnieper, in cities and villages, on the coast of the Black Sea and the Sea of Azov, who speak Ukrainian, Crimean Tatar, Russian, Hungarian or [use]sign language – together we create Ukraine. Not in words, but in deeds!” Mr. Zelenskyy said.

The president stressed that the country is ready to overcome any threats, whether they be political and military.

The president noted that the Armed Forces of Ukraine, Ukrainian diplomats, volunteers and the national resistance forces of the whole country inspire Ukrainians to defend their land, not give in to provocations and “overcome the path to a peaceful and united Ukraine.”

“We are paving the way together, and only together will we build a peaceful and happy Ukraine! It is a great honor to be the president of such people, of such a state on such a day – the day of unity of the great people of a great Ukraine,” Mr. Zelenskyy said.

On February 16, a train of unity left the west of the country and travelled east. The train was meant to be a symbol of unity as it carried the flag of Ukraine through 12 regions of the country from Rakhiv in the Zakarpattia region to Mariupol in the Donetsk region of the country.

At 6:43 p.m. the train arrived at the Main Railway Station in Lviv. It was met by representatives of the authorities, the public, passengers of the station and the media. The event was also attended by the head of the Lviv Regional State Administration, Maksym Kozytskyy, and the press attaché of the U.S. Embassy in Ukraine, Daniel Langenkamp.

“I thank our American partners for the opportunity to celebrate the first Unity Day together. Unity is our strength! It is in our hearts and our thoughts. Many thanks and respect to the partners who are ready to support Ukraine! Many thanks to the people who are ready to stand side by side and overcome the enemy. Together we are strong and invincible! Glory to Ukraine! Glory to the heroes!” Mr. Kozytskyy said.

“We are very happy to work in Lviv, where we continue to carry out our diplomatic mission. It is an honor for us to work in this beautiful city and this beautiful area,” the press attaché of the US Embassy said.