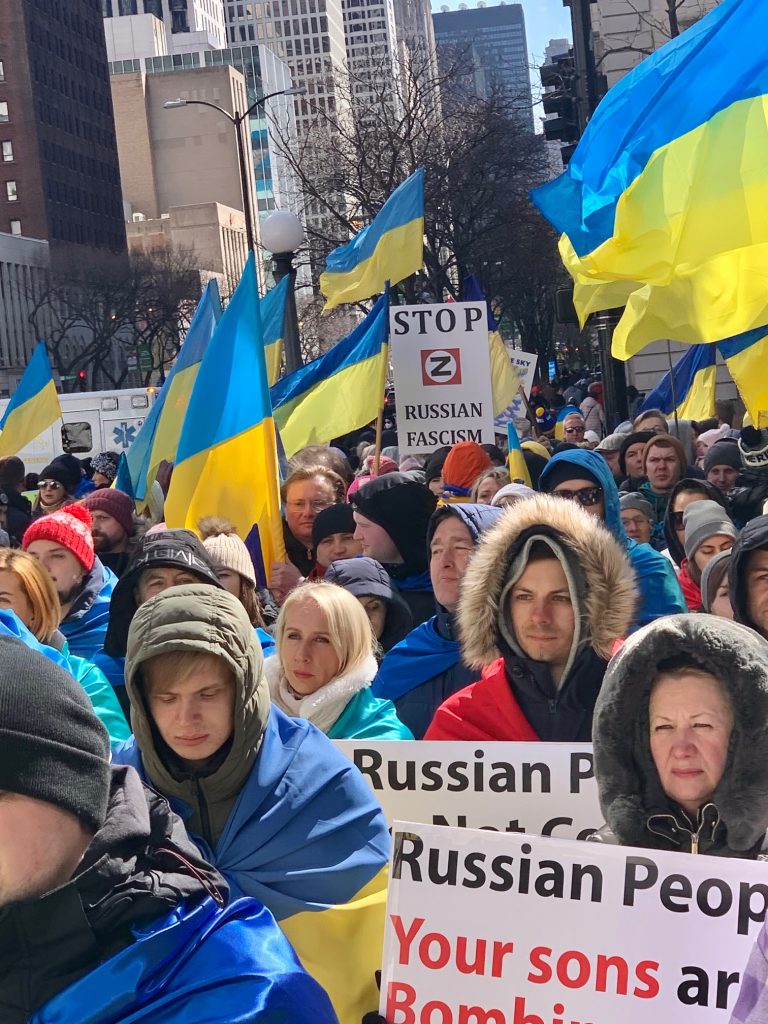 Mark Raczkiewycz
Protesters listen to speakers at a rally for Ukrainian solidarity in downtown Chicago on March 27.

CHICAGO – Determined to see Ukraine withstand Russia’s renewed invasion of the country, and rallying near this city’s iconic Water Tower whose yellow limestone structure survived the Great Chicago Fire of 1871, hundreds of Chicagoans attended a pro-Ukraine rally at the castellated and now-defunct pumping station on March 27.

It was the fifth rally – the third held downtown – that the Illinois Division of the Ukrainian Congress Committee of America (UCCA) has held since Kremlin dictator Vladimir Putin ordered a multi-pronged assault on the neighboring country that began on February 24.

Thousands of civilians and soldiers have died, and a quarter of Ukraine’s approximate pre-invasion population of some 44 million people has been displaced, leading to the biggest migration and humanitarian crisis on the European continent since World War II. Whole villages, towns and several cities have been obliterated as a result of a relentless Russian bombardment, prompting the U.S. and European Union (EU) to accuse Russia of committing war crimes.

As at previous rallies, local UCCA chapter head Ihor Diaczun was master of ceremonies. He introduced three national lawmakers, a city alderman and local community leaders to speak before what a Chicago police officer said was a crowd of about 300-400 protesters.

The Ukrainian Weekly witnessed more rally goers join the culmination of the rally, which ended beyond the city’s Loop at Millennium Park, where the Ukrainian national anthem was sung as plumes of the country’s national colors of blue and yellow smoke billowed over the Cloud Gate sculpture.

“Ukraine has shattered the myth that Russia cannot be defeated … [and is displaying that it’s]a foolish war,” Mr. Diaczun said, referring to the heavy losses Russia has sustained in personnel and materiel.

NATO last week said that up to 15,000 Russian soldiers have been killed since the full-scale war began, about the same number of troops that had perished after a decade of the Soviet Union’s disastrous invasion of Afghanistan in 1979-1989.

Ukraine’s military said on March 28 that an estimated 17,000 Russian military personnel have been killed, about 400 more than the previous day.

Some 150,000-190,000 Russian military personnel, according to British and U.S. estimates, were part of the initial invading Russian force. Putin has waged a war on Ukraine since 2014 when he ordered the forcible seizure of Ukraine’s Crimean Peninsula and the easternmost regions of Luhansk and Donetsk.

“Ukraine didn’t fall in three days [as military experts had expected]and Kherson is the only [regional capital]to have been taken,” he said, while adding that Ukraine is now successfully launching counterattacks.

The consul general also said Russia still has not established superiority over Ukraine’s skies, and he said that his country has more tanks now than before the renewed invasion because Ukraine’s forces have captured more Russian tanks than they have lost.

He called on the West and other countries to impose additional sanctions on Moscow as well as Belarus, which enabled the invasion by allowing Russia to use it as a launching pad and continued base of operations from which to attack Ukraine.

Mr. Koledov also called on U.S. agricultural giants ADM and Cargill to join the more than 400 companies which have left or suspended operations in Russia over the country’s invasion.

“Peace is needed immediately,” he said. “This is a war for independence and we must win.”

Echoing earlier predictions that Ukraine would fall in a matter of days, Sen. Dick Durbin (D-Ill.) said the Russians “mistook the courage, determination and resilience … of the people of Ukraine who stood up to Russia.”

U.S. Rep. Jan Schakowsky (D-Ill.), who has Jewish Ukrainian roots, said she was proud of her heritage and of Ukrainian President Volodymyr Zelenskyy, who is also Jewish.

Mentioning Russia’s “brutality” and calling Putin a “dictator,” she noted the “displacement of lives and families” in the ongoing war, which is in its eighth year.

Ms. Schakowsky continued by saying she was ready “to see the defeat of Vladimir Putin. … I stand here to pledge my support for you [Ukrainians].”

His Ukrainian fiancé from Dnipro is currently in Poland where he proposed to her in Krakow a week ago, having last seen her on February 14 in Ukraine, less than two weeks before the invasion.

Holding a Polish and Ukrainian flag, Mr. Zurek said he was at the protest because “Putin is a madman … and the war is terrible. He has lost all his senses. … This is devastation.”

Rep. Mike Quigley (D-Ill.), speaking on the stage, directly addressed the media present about humanizing the war and informing their readership and viewership “of who the humanitarian organizations are” who are providing assistance to Ukrainians.

Regarding the nearly 4 million people who’ve fled Ukraine, the lawmaker mentioned that U.S. President Joe Biden will welcome 100,000 Ukrainian refugees to the country.

“That’s a great start. … The Statue of Liberty isn’t holding a stop sign. It is the spirit of who we are as a country to bring [to the U.S.]all those who are in these horrible situations and to help our allies who are doing the same,” Mr. Quigley said.

City Alderman Brian Hopkins, whose constituents include residents of the Ukrainian Village neighborhood, challenged voters to hold him and other public servants accountable.

“Forbearance, while innocent children are being killed, would be unacceptable,” he said.

Ukrainian children constitute about half of the 3.8 million refugees who’ve fled Ukraine and the country’s prosecutor general’s office says 121 have been killed in the war since February 24.