In his first State of the Union address, Biden praises strength of Ukrainian people, says Putin will pay a ‘high price’ for Russia’s war in Ukraine 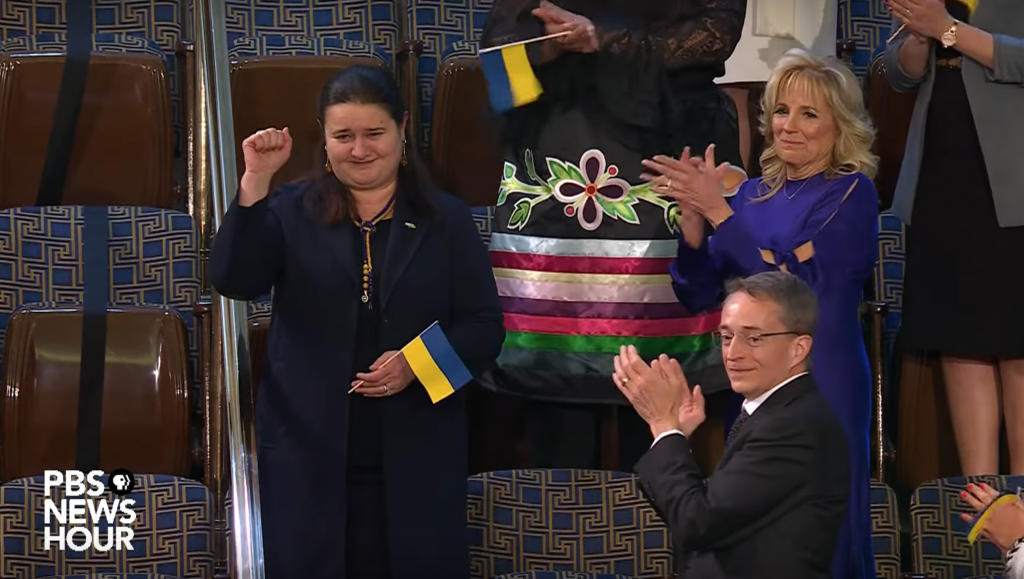 Screenshot of PBS NewsHour broadcast
Ukraine’s Ambassador to the U.S. Oksana Markarova (left) acknowledges a standing ovation given to her during U.S. President Joe Biden’s State of the Union address on March 1. Ms. Markarova was a guest of Jill Biden (right), the First Lady of the United States.

WALTHAM, Mass. – Speaking before a joint session of Congress, U.S. President Joe Biden said Russian President Vladimir Putin had “unleashed violence and chaos” against Ukraine and promised the Russian president would “pay a continuing high price” for his premeditated and unprovoked war against the Ukrainian people.

“Six days ago, Russia’s Vladimir Putin sought to shake the very foundations of the free world, thinking he could make it bend to his menacing ways,” Mr. Biden said in a televised address. “But he badly miscalculated. He thought he could roll into Ukraine and the world would roll over. Instead, he met with a wall of strength he never anticipated or imagined. He met the Ukrainian people.”

The president also introduced the Ukrainian ambassador to the United States, who was a guest of honor and sat next to the president’s wife, Jill Biden.

“Let each of us here tonight in this chamber send an unmistakable signal to Ukraine and to the world,” Mr. Biden said as members of Congress and guests all rose to their feet and gave the Ukrainian ambassador to the U.S.

, Oksana Markarova, a rousing ovation that brought tears to her eyes.  She placed her hand over hear heart and could be seen saying thank you repeatedly. Ms. Biden then hugged Ms. Markarova.

“Yes, we the United States of America stand with the Ukrainian people,” Mr. Biden said, adding that the world was watching Ukraine’s heroic struggle to defend itself against a massive Russian military force.

Russia massed some 200,000 well-equipped troops and sophisticated weaponry along Ukraine’s borders in the days before the Russian ruler ordered the launch a full-scale war against Ukraine.

Faced with seemingly insurmountable military odds, the Ukrainian resistance has repeatedly demonstrated its heroism and resolve to win the war.

“From [Ukrainian] President [Volodymyr] Zelenskyy to every Ukrainian, their fearlessness, their courage, their determination inspires the world,” Mr. Biden said. “Groups of citizens blocking tanks with their bodies. Everyone from students to retirees, teachers turned soldiers defending their homeland. In this struggle, as President Zelenskyy said in his speech to the European Parliament, ‘light will win over darkness.’”

“The Ukrainians are fighting back with pure courage. But the next few days, weeks, months will be hard on them. Putin has unleashed violence and chaos,” Mr. Biden said. “And a proud Ukrainian people, who have known 30 years of independence, have repeatedly shown that they will not tolerate anyone who tries to take their country backwards.”

By various news accounts, the Ukrainian resistance has increasingly angered the Russian ruler, who on several occasions uncharacteristically lashed out at his military leadership. Putin’s behavior in the past week has alarmed U.S. intelligence personnel, particularly after he ordered his country’s nuclear forces to be place on heightened alert.

Russia began its full-scale invasion of Ukraine by striking various strategic and military targets, and it said repeatedly that it would not target residential or civilian locations. But as the war stretched into its first week and as the Russian president has grown increasingly angry at the lack of progress made by his army, civilians have been increasingly targeted by Russian airstrikes.

On March 2, CNN reported that rockets rained down overnight on a maternity clinic and a holocaust memorial site in Kyiv. Heavy shelling in Kharkiv tore through the city’s national university. Ukraine’s State Emergency Service said the same day that more than 2,000 Ukrainian civilians have so far been killed in the war.

“Putin’s latest attack on Ukraine was premeditated and unprovoked,” Mr. Biden said. “He rejected repeated efforts at diplomacy. He thought the West and NATO wouldn’t respond. And he thought he could divide us at home. Putin was wrong. We were ready.”

“And now that he has acted, the free world is holding him accountable,” Mr. Biden said. “Along with 27 members of the European Union, including France, Germany, Italy, as well as countries like the United Kingdom, Canada, Japan, Korea, Australia, New Zealand, and many others, even Switzerland. We are inflicting pain on Russia and supporting the people of Ukraine. Putin is now isolated from the world more than ever.”

Mr. Biden said the U.S. was cutting Russia’s largest banks off from the international financial system, a move that would stop Moscow’s central bank from defending the Russian Ruble, which has tanked in the days since the full-scale war began.  It is now worth less than one U.S. penny. The move, Mr. Biden said, has made “Putin’s $630 billion ‘war fund’ worthless.”

Mr. Biden also said that the U.S. Department of Justice had begun assembling a dedicated task force to go after the assets of Russia’s oligarchs.

Speaking directly to those oligarchs who have long held their assets and residences in England and throughout Western Europe, Mr. Biden said, “We are joining with our European allies to find and seize your yachts, your luxury apartments, your private jets. We are coming for your ill-begotten gains.”

“Tonight, I am announcing that we will join our allies in closing off American air space to all Russian flights – further isolating Russia – and adding an additional squeeze on their economy,” Mr. Biden said, adding that, “The Ruble has lost 30 percent of its value. The Russian stock market has lost 40 percent of its value and trading remains suspended. Russia’s economy is reeling and Putin alone is to blame.”

Mr. Biden also explicitly reassured the American public that U.S. forces would not be deployed to fight in Ukraine, but he said troops were moving to reinforce and defend NATO allies “in the event that Putin decides to keep moving west.”

“For that purpose, we’ve mobilized American ground forces, air squadrons and ship deployments to protect NATO countries including Poland, Romania, Latvia, Lithuania and Estonia,” Mr. Biden said. “As I have made crystal clear, the United States and our allies will defend every inch of territory of NATO countries with the full force of our collective power.”

Mr. Biden also sought to reassure the American public that, while the sanctions being imposed on Russia will impact the U.S. economy, “I want you to know that we are going to be okay.”

He announced that the U.S. has worked with 30 other countries to release 60 million barrels of oil from reserves around the world.

“America will lead that effort, releasing 30 million barrels from our own Strategic Petroleum Reserve. And we stand ready to do more, if necessary, unified with our allies,” Mr. Biden said.

He also framed the war in Ukraine as a global battle between democracy and autocracy, and “democracies are rising to the moment, and the world is clearly choosing the side of peace and security.”

But he also noted that the world is facing a real test.

“While it shouldn’t have taken something so terrible for people around the world to see what’s at stake, now everyone sees it clearly,” Mr. Biden said.

“This is a real test. It’s going to take time. So let us continue to draw inspiration from the iron will of the Ukrainian people,” Mr. Biden said.

“To our fellow Ukrainian Americans who forge a deep bond that connects our two nations, we stand with you,” Mr. Biden said. “Putin may circle Kyiv with tanks, but he will never gain the hearts and souls of the Ukrainian people. He will never extinguish their love of freedom. He will never weaken the resolve of the free world.”