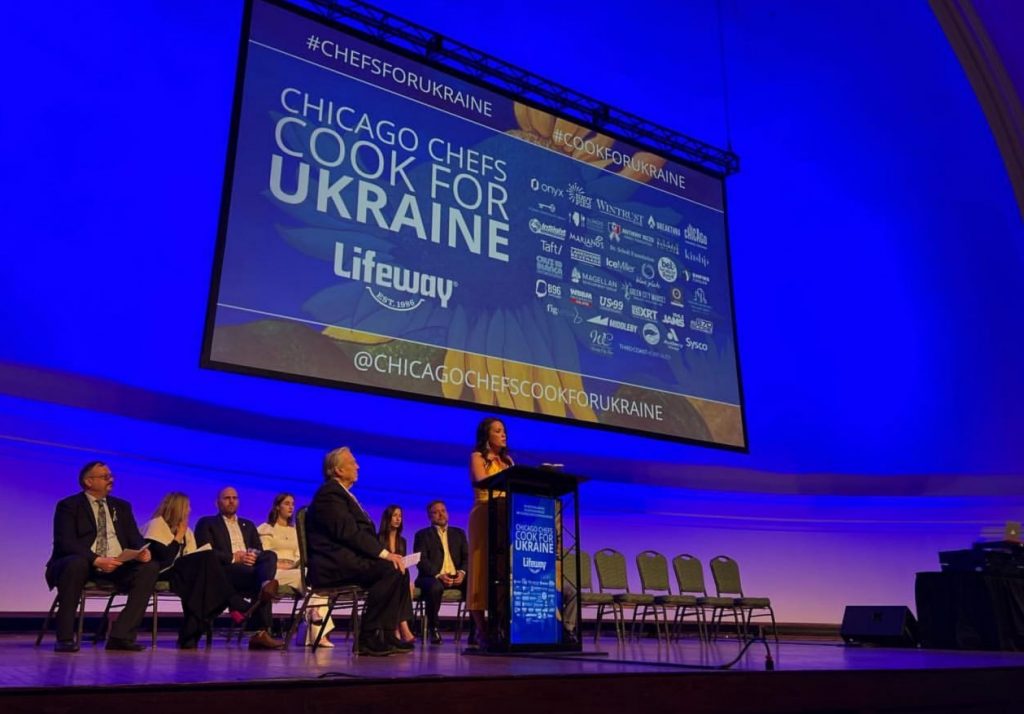 CHICAGO – About $500,000 was raised for the benefit of Ukraine in the U.S.’s third-largest city on March 16 by a family-owned business of dairy products that assembled the metropolitan area’s close-knit community of culinary artists.

More than 70 chefs fed 1,700 ticketholders with exquisite sample-size portions at Chicago’s Navy Pier on the shore of Lake Michigan in what was the city’s biggest fundraiser to date to help the Chicago’s sister-city country as it staunchly withstands an ongoing Russian invasion that has entered its fourth week.

Lifeway Foods, a nationwide producer of kefir – a dairy drink made from fermented milk – organized the event in an astonishing 10 days. Such an event “usually takes months to plan with committees,” said the company’s president and CEO Julie Smolyansky, a native of Kyiv who emigrated in the 1970s.

Donors, who bought tickets ranging from $150 to more than $75,000, were treated to a wide array of dishes from the city’s prolific chefs.

Chicago’s classical fares of stuffed pizza and Eli’s Cheesecake were on offer, as were Mexican bites from geographic-specific regions, Cajun food from New Orleans and homemade ice cream and chocolate delights from Microbatch Confections, a popular destination just north of the city’s Ukrainian community.

Myron Lewyckyj, owner of the Tryzub (trident) restaurant in the city’s Ukrainian Village neighborhood, was seen perspired after being one of the first to run out of his Ukrainian-inspired dishes near the entrance to the main ballroom.

“This is the tinniest thing we [chefs]could do, is to donate our food for one night,” said Jonathan Sawyer, a Hungarian American who is the chef-owner of Adorn Restaurant at Chicago’s Four Seasons Hotel.

The money raised will further be transferred to the Washington-based World Central Kitchen (WCK), a non-profit group run by award-winning chef Jose Andres.

When Russia again invaded Ukraine on February 24, the food provision group in disaster areas started feeding people fleeing the war at all seven border crossings in Poland and in neighboring Moldova, Slovakia and Hungary.

The United Nations says that more than 3 million Ukrainians have been uprooted from their homes, mostly from indiscriminate Russian bombardment that has targeted civilian areas and infrastructure.

“The war in Ukraine is causing unimaginable human suffering with a tragic loss of life and the displacement of millions of people. While the need for immediate humanitarian assistance to Ukrainians is of the utmost importance, the acute development impacts of a protracted war are now becoming more apparent,” said United Nations Development Program Administrator Achim Steiner in a news release on March 16.

Ms. Smolyansky furthermore said Lifeway will help rebuild Ukraine once the war ends and the company will establish a presence there. “Every child killed in the war” will be posthumously named “an honorary CEO” of Lifeway in Ukraine, she said.

More than 3,500 infrastructure units, including schools, kindergartens and hospitals have been destroyed or damaged, Ukraine’s Interior Ministry says.

Kristi Katz, head of CFK, said at the event that so far 1 million meals have been served at border crossings in countries that share a border with Ukraine.

In the VIP area of the fundraiser, Brian Jupiter, chef and owner of the Frontier and Ina Mae Tavern venues, was serving seafood gumbo, a Cajun dish from his native city of New Orleans.

Married to a Lithuanian, he said a “day off was taken” to work at the event “because we need to talk more about what’s happening in Ukraine. … When things get tough, we [Chicago chefs] bind together to help out.”

It’s “all about joining forces to keep this humanitarian crisis in the news,” added Ms. Smolyansky of Lifeway Foods.

“Nobody said ‘no’ to us when organizing the event,” she said of planning the fundraiser.

Yuriy Figel, co-chair of Chicago’s sister cities committee with Kyiv, said he hopes “to see more events like this across the U.S. beyond Ukrainian communities” to galvanize support on a larger scale.

A native of Kyiv, the transplanted Chicagoan said “it’s an honor to be here … and to show support for the chefs here and those on the borders of Ukraine feeding” asylum seekers fleeing the war.

Another donor, Gloria Santiago, said she came to ensure “Ukrainians’ voices are heard. … It’s not about the event financially. … It’s unbelievable what is happening [in Ukraine]. … This is about the world fighting for democracy.”

The city’s sister committee with Kyiv has so far raised more than $20,000 to date, “and more is coming in daily,” said the group’s co-chair, Vera Eliashevsky, a Ukrainian American and Chicagoan.

The group is channeling the money through the Support Ukraine Fund and Kyiv Alliance, both vetted organizations that provide medicines and humanitarian support to Ukraine.

The Ukrainian American is selling two Ukraine-themed t-shirts on the festival’s site and has pledged to match all proceeds up to $15,000. As of March 17, he has raised $65,000.