Long a crossroads, Lviv is now a massive hub for refugees fleeing Russia’s war on Ukraine 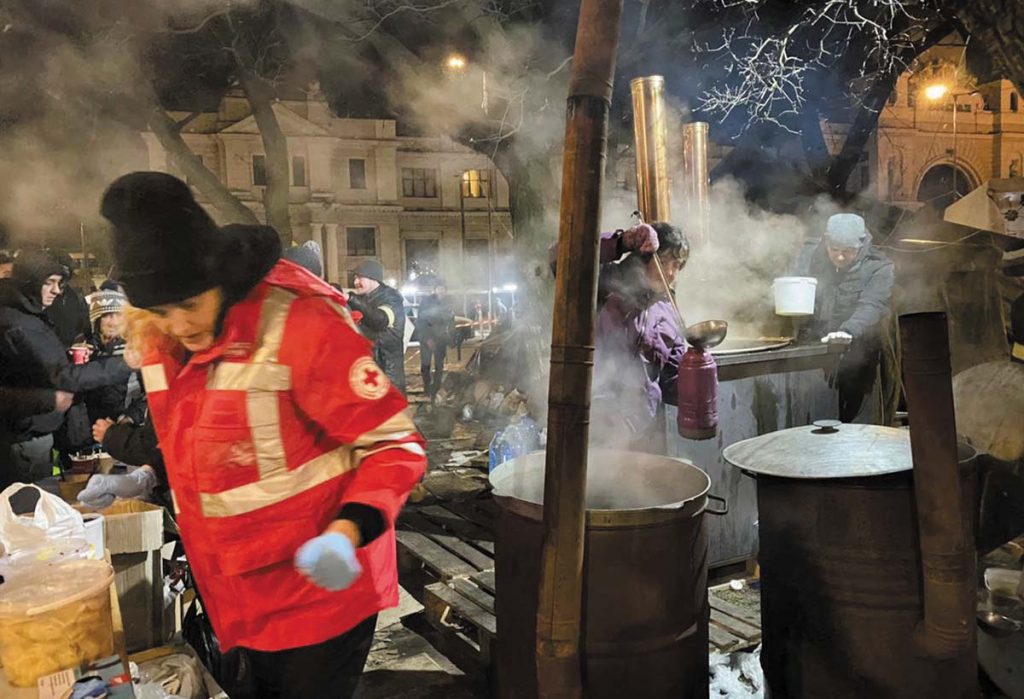 Roman Tymotsko
As millions of Ukrainians have fled the violence in the east of the country, volunteers in Lviv have provided free food and shelter.

LVIV – Just three weeks after Russian President Vladimir Putin launched an unprovoked and premeditated war against Ukraine on February 24, Lviv has become a massive hub for refugees fleeing indiscriminate violence throughout the country.

Ukrainians of all ages have fled bombardments using cars, buses and trains – they have even moved on foot – as many people throughout Ukraine have grown desperate to flee their homes after it became evident that the Russian military was targeting civilians.

As a result, more than 3 million Ukrainians have fled the country, according to the U.N. agency that tracks refugees.  Many who have not yet fled the country have instead moved west to the relative safety of Lviv, which has been targeted by the Russian military, but it has not yet seen the massive bombardments that have devastated other cities in the east, among them Mariupol, Kharkiv and the capital, Kyiv.

“In just seven days, we have witnessed the exodus of one million refugees from Ukraine to neighboring countries,” Filippo Grandi, the U.N. High Commissioner for Refugees, said after the first week of Russia’s full-scale invasion of Ukraine.

A correspondent for The Ukrainian Weekly visited the Lviv railway station five days in a row after the full-scale invasion began on February 24. In total, he spent more than 15 hours in western Ukraine’s busiest transport hub and what he saw was a situation that has changed over the course of the war.

In the initial days after February 24, the railway station was largely chaotic with such a massive influx of people both coming to Lviv from the east of the country, and thousands of people desperate to board trains bound for Poland further west.  Over time, however, the situation in the train station has grown much more organized, though it is still very intense.

Standing on the station’s railway platforms, this correspondent witnessed hundreds of tearful goodbyes, desperate pleas to board a train and disappointed refugees who could not get on a train to Poland.

Maksym Dvorovyi, a lawyer who left Kyiv on the second day of the full-scale Russian invasion, spent almost an hour getting from his train to the station’s exit. Usually, it takes roughly three minutes to exit a train and leave the station.

“The ride from Kyiv to Lviv took approximately 12 hours [normally it takes about 5-10 hours, depending on the train]. Cars were filled with people: compartments meant for four people had up to nine people, while the corridors were also filled with people sleeping on the floor,” said Mr. Dvorovyi, who spoke exclusively with The Weekly’s correspondent in Lviv.

Trains packed with refugees have been arriving in Lviv from all over the country. Since March 3, all trains headed west have been carrying refugees to the west of the country.  While the trains are free for individuals leaving areas attacked by Russian forces, train schedules are largely nonexistent.  Because of the danger trains face moving through the country, rail staff often need to change their usual routes or postpone departures and arrivals.

The Weekly’s correspondent spoke with individuals who travelled from Kyiv to Lviv to flee the violence. Sadly, several noted that it was not their first time fleeing their homes. Many fled Crimea or the Donbas region in 2014, and they are doing so once again.

From Lviv, refugees can travel to countries in the European Union (EU). They primarily travel by car or train to a border crossing with Poland, or they travel south to the Zakarpattia region where they can cross into Hungary.

In the first days of the full-scale invasion, huge queues of cars could be seen at the Polish-Ukrainian border. Local officials said the lines for cars stretched almost 20 miles. As a result, many people decide to make the crossing on foot.

The road out of Ukraine across the western border is typically fastest by train, but Ukrainians face a significant challenge in just getting a spot on a train. Huge queues at the train station initially made the situation chaotic. Police and volunteers, however, have since managed to organize the situation at the Lviv train station.

Since the beginning of the full-scale invasion and the introduction of martial law in Ukraine, all Ukrainian men age 18-60 have been forbidden from leaving the country. Men in that age range instead come to the train station to help their families get on a train and say goodbye.

Alex, who gave only his first name, said he was from Kyiv, and he came to say goodbye to his wife and daughter.

“We’ll meet in the European Union. I mean here. Ukraine will be a part of the EU when you return,” he said to his wife before she boarded a train bound for Poland.

Railway officials and volunteers have prioritized putting women and children on trains at the Lviv station. Since Ukrainian men are not allowed to leave, most people at the train station are women and children, though some refugees are international students who are trying to leave Ukraine.

According to officials at Ukraine’s Ministry of Foreign Affairs, Russia is actively propagating stories abroad about the problems of international students leaving Ukraine.

“I appeal to all Ukrainian volunteers who are currently fighting in the information space. If you see somewhere in the comments about the topic of alleged ‘racism’ by Ukraine in relation to foreign students, get involved and explain that all these problems are not created by the Ukrainian government, but by Russia’s full-scale invasion,” said Gosha Tykhyi, the communications advisor to Ukraine’s foreign affairs minister.

Mr. Tykhyi said the Ukrainian government has made every effort to help international students who are looking to leave the country.

“While Ukrainian Railways did the best it could to provide passengers with safe transportation, passengers were not as kind at times. Some African and Asian students were not listening to the officials’ calls to let children and women in first and tried to get on the train at all costs,” Mr. Dvorovyi said.