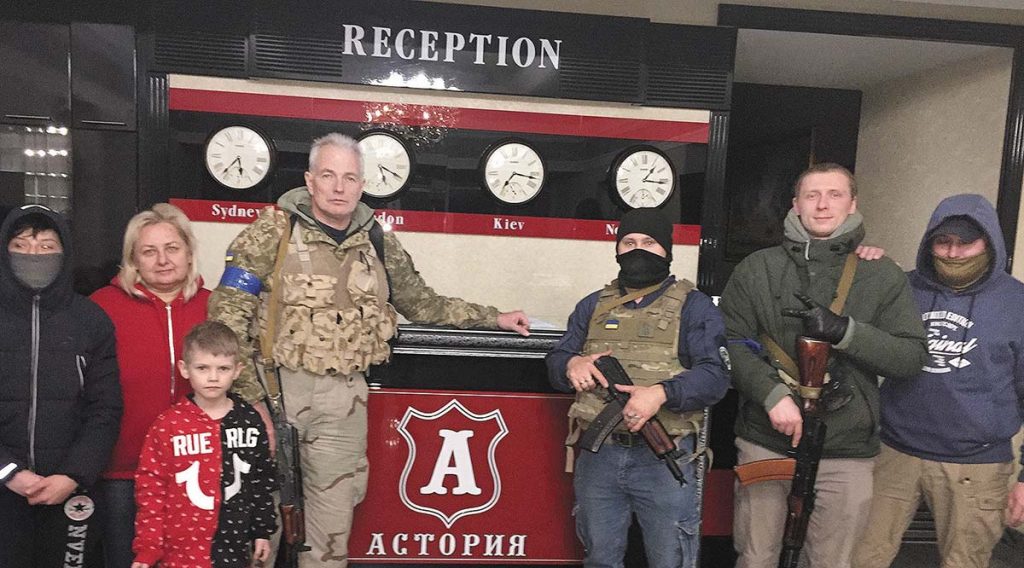 Askold Krushelnycky
Viktor (left, in uniform) and several of the internally displaced persons who are staying at a hotel in Mykolaiv.

MYKOLAIV, Ukraine – The Ukrainian port of Mykolaiv is being reinforced for an expected renewed onslaught by Russian forces, which have so far been frustrated in their plans to seize the city that is seen as a key to their ambitions to control Ukraine’s coastline.

The region’s governor, Vitaliy Kim, whose inspiring leadership has made him a national symbol of resistance, said that, “The Russian army is experiencing problems and is falling back. It isn’t fighting our army; it’s just shelling and dropping bombs all over our city. That’s a pity.”

He said he could not go into detail about what the Ukrainian army was doing, but he did say that, “For now the situation is better than it was yesterday, and I think that over the next two days you will learn more from oﬃcial sources.”

The Ukrainian Weekly’s correspondent saw a Ukrainian armored column enter the city on March 13. It did not stay and carried on to a battle the following day near the border with its neighboring region, Kherson, where it pushed back Russian forces by several kilometers.

He said the city had enough resources to keep the Russians at bay and added “our best resource is our willpower.”

In order to achieve their goal of taking Mykolaiv, the Russians need to move west across the Buh River, which runs through the city and is a natural defense for Moscow’s attempts to press on to Odesa, the biggest prize along the Black Sea coast.

Mykolaiv is an important city in its own right, but the Russians wanted to capture it and the mile- long Varvarskiya Bridge across the Pivdenny Buh River to allow their tanks, armored personnel carriers and supply vehicles to race 78 miles westward to Odesa, Ukraine’s largest port and home to its navy.

Control of Odesa would allow Russia to dominate Ukraine’s entire Black Sea coast and choke the country’s economy, which depends on the port for a huge slice of its export revenues.

The Russians know the Varvarskiya Bridge has been wired to blow up by the Ukrainian military should it be in danger of being captured. So, they have been trying to capture crossing points across the river north of the city at towns like Vozhnesensk and Pervomaisk, which have seen fierce fighting. The Russians used airplanes, missiles and artillery to attack Pervomaisk on March 14, but Ukrainian troops, who have already destroyed some of the bridges, have held oﬀ the Russians.

There have been many civilian and military casualties, but Mr. Kim said the hospitals were coping well for the moment. He said there were adequate supplies of medicine and no shortages of doctors or other medical staﬀ.

The Mykolaiv authorities are not allowing members of the press to visit hospitals or morgues. However, one reliable source who did visit the morgue on March 14 told The Weekly that there were some 40 civilian dead and 100 people in uniforms located in the morgue, stretching the facility’s capacity.

“It’s quite an awful sight with some of the dead stacked upon each other and covered only in blankets,” Mr. Kim said.

Although the authorities are not giving out military casualty figures, people here have said their city has paid a high price in lives lost since the Russians mounted intensive bombardments from the first day Russia launched its full-scale war on Ukraine on February 24.

The Russians initially captured Mykolaiv’s airport to the northwest, but Ukrainian forces wrested it  back after heavy fighting. One mother at the morgue said it had taken 10 days to retrieve her soldier-son’s body from ground that was being constantly shelled. She said she had no more energy to cry and had accepted days before that her son had been killed and had found some relief in knowing she could now bury him properly.

The city’s streets are noticeably more deserted than they were in the previous week, although many small supermarkets, grocery stores and pharmacies are still operating and nobody is apparently going hungry yet. A well-organized network of volunteers tries to check on the elderly, those living alone and otherwise potentially vulnerable people to ensure they have suﬃcient food or to help them evacuate from their homes.

Although alcohol sales have been banned throughout Ukraine for more than a week, some cafes continue to serve customers.

The hipster Avocado Cafe, not far from the Mykolaiv region’s administration oﬃces that houses the governor’s oﬃces, is still attracting stylishly dressed young people who share lattes with police from a nearby station. The police officers sling their Kalashnikov machine guns over their shoulders as they get their shots of caﬀeine.

Mr. Kim is certain that the Russians are deliberately targeting civilian areas in order to scare people into leaving Mykolaiv, because it might make it easier to capture the city.

“That is consistent with their goals. They are trying to destroy the infrastructure, electricity, heat and gas,” Mr. Kim said.

The governor said that hundreds of people were indeed leaving and he understood the desire of people to get their loved ones, especially children and the elderly, to safety. However, he said he was proud that “90 percent of the men are returning to defend Mykolaiv” after helping their families out.

Signs of the city inhabitants’ determination to fight abound. Maksym (The Weekly has decided to use only first names in order to ensure the safety of residents who spoke with the newspaper) wore the uniform of a member of the territorial defense forces, which are made up of mostly volunteers or reservists, was on patrol with his friend, Oleg. Both men, who are in their mid-50s, and, in normal times, are civil servant bureaucrats, were armed with Kalashnikov machine guns. They watched the streets carefully as dusk approached.

“That prick doesn’t scare us. We’re not running away and the Russians will get a hell of a reception if they try to come into our city,” Maksym said.

But the two soldiers, like many other people who spoke with The Weekly for this story, said they cannot understand why NATO will not implement a no- fly zone over Ukraine.

“If we had that,” he said, “the Russians would be out of here very fast.”

The main roads here are protected with checkpoints and traﬃc obstructions made of concrete and steel girders. There are also various tanks traps, coils of barbed wire and other devices that are meant to shred thick military tires.

Piles of old car tires are stacked at many street corners. They are meant to serve different functions. Some provide cover for defenders if Russian forces break into the city. Others stand ready to be lit and burned, as their smoke would obscure the field of battle, giving Ukrainian soldiers some degree of cover. Pre-prepared Molotov Cocktails have been placed near some tires.

On March 14, Mr. Kim said he believes his city will get some respite as Ukrainian forces counterattack eastward to try to liberate parts of the neighboring Kherson region, which has been occupied by the invaders. He added that he believes the Russians are increasingly focusing on objectives in the west of Ukraine.

On March 13, missiles were launched at a number of cities in the country’s west, where  35 people died and more than 100 were injured when multiple missiles struck a military base at Yavoriv near the Polish border.

Ukrainian forces are preparing for Russian incursions along the Belarus border, which is 70 miles from western Ukraine’s largest city of Lviv.

Respite, however, is relative. Shelling had erupted at diﬀerent times all day in Mykolaiv.

The Weekly’s correspondent was jostled awake by shelling around 7 a.m. local time. The blasts cut off electricity to his hotel for some 40 minutes. About 12 hours later, a series of explosions, likely caused by large-caliber mortars or missiles, could be heard nearby. Around midnight, this correspondent was again jostled awake by artillery volleys that seemed quite close and shook the building.

At 9 a.m. local time on March 15, this correspondent prepared to leave Mykolaiv in order to move further west in Ukraine. He had been staying in a hotel owned by a man who opened the facility up to some 35 refugees, among them men, women and children, who fled Kherson. The hotel owner provided accommodation for free and was using his own money to feed his guests.

All of the men who stay in the hotel, including its owner, Viktor, volunteered to serve in the country’s territorial defense forces and all had been issued Kalashnikov rifles. They draw up daily schedules for guard duty to protect the hotel throughout the night. They eat supper communally in the hotel’s dining room just after curfew begins at 6 p.m. Viktor gives a report of what’s been happening around Ukraine that day, including a description of a successful operation by Ukrainian forces in another part of the country.

The atmosphere is charged with emotion. But tender, quiet threads of courage, determination to defend their country and shared ideals bind these extraordinary people together.

Now, at 9 a.m. local time on March 15, this correspondent prepares to leave Mykolaiv. Viktor and the others staying here have been so considerate, generous and empathetic that after only two days with them it feels like leaving close family. There is a sense of feeling privileged to have met them and so many like them in the more than three weeks of all-out war. When I return to a car alone, I know I’ll cry.