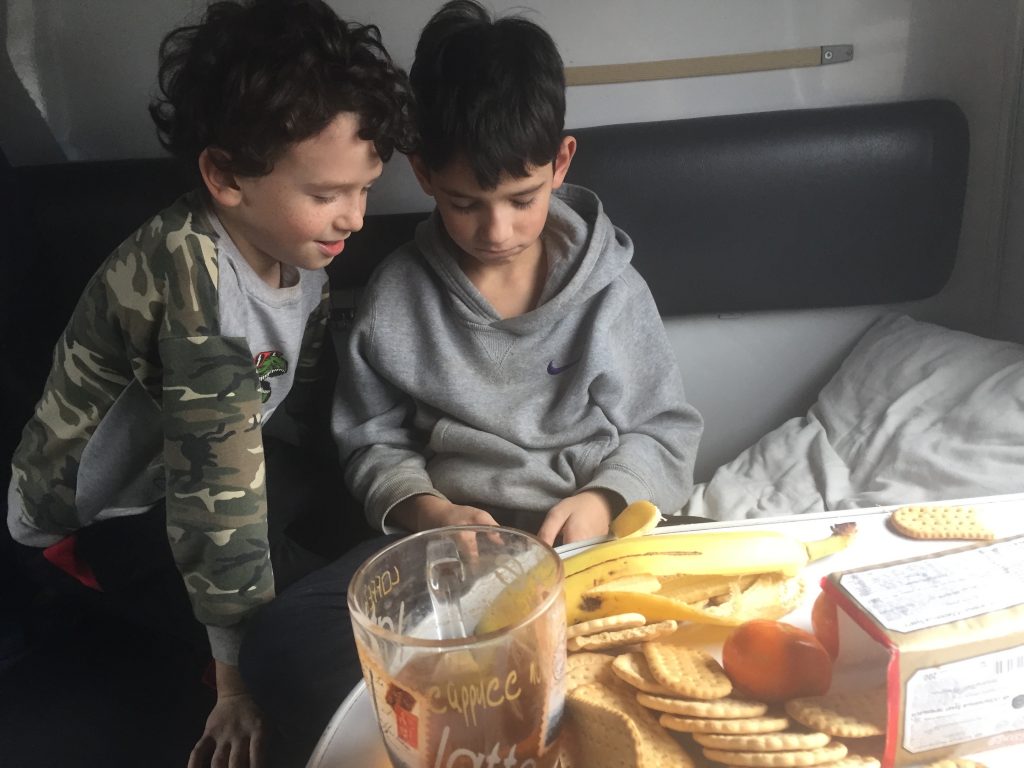 Askold Krushelnycky
Two brothers, Danylo (left), age 7, and Ivan, age 8, played games on their mother’s mobile phone as a train took the family from Lysychansk, a town in eastern Ukraine, to Lviv, in the far west of the country.

LYSYCHANSK, Ukraine – With the number of escape routes out of Ukraine severely limited and with bombs hitting various civilian locations, refugees fleeing the country have faced increasingly horrific and dangerous conditions as Russia’s unprovoked and premeditated war moved into its third week.

Most of the refugees have heading westward with the city of Lviv still viewed as a safe haven on the way to European Union (EU) countries.

But 300 Belarusian tanks, according to Ukrainian military intelligence, wait on their side of Ukraine’s border, 70 miles north of Lviv, to join Russia’s onslaught.

The UN says that more than 1.2 million people have left Ukraine and the EU estimates that up to 4 million refugees may eventually flee the country.

On March 2, a convoy of UN vehicles from Kyiv set off for Uzhorod in western Ukraine on the border with Slovakia. Anyone who wanted to leave the capital was allowed to follow the convoy in their own vehicles and at their own risk.

This reporter accompanied a trainload of evacuees from Lysychansk, Ukraine, an embattled area in the country’s eastern Luhansk Oblast, on what turned out to be an exhausting three-day rail journey along a 696-mile route that, in normal times, takes around 24 hours.

Luhansk and neighboring Donetsk Oblast have been partly-occupied by Moscow’s puppet “separatist” forces since the Kremlin first invaded Ukraine in 2014.

Earlier, Kremlin leader Vladimir Putin declared the pro-Moscow entities independent republics. In launching his full-scale war on Ukraine, he used the pretext of “liberating” Russian speakers in the region from what he called a “genocide” being committed by the Ukrainian government.

Hundreds of evacuees, mostly women and children, were stranded at Lysychansk Railway Station, near the main Ukrainian-held city of Severodonetsk, because Russian shelling destroyed a portion of the track between them and the train which was scheduled to pick them up at 4 p.m. on a recent Friday.

At about 10:30 p.m., refugees were still waiting for their train, and Russian forces began pounding Lysychansk with artillery bombardments. The sound of the blasts, amplified within the cavernous station, triggered screams from terrified children.

Some people threw themselves and their children to the hard faux-marble floor. Others rushed to hide in a 1960s-era small, dilapidated bomb shelter. To reach the shelter, which can only accommodate a fraction of those trying to enter, is reached by climbing a series of perilously steep, rickety wooden stairs.

A young adult handicapped man who had been stretched out on a wooden bench in the waiting room, was hastily placed in his wheelchair and pushed toward the shelter where people carried him inside.

This journalist stayed in the waiting room and, together with other passengers, tried to catch some sleep in the increasingly cold hall. Outdoors the temperatures dropped below freezing, preserving patches of ice from the previous snowfall.

Just after 1 a.m., a massive explosion shook the waiting room and its tall windows located on opposite ends of the building. With each explosion, the windows shook, but, surprisingly, they did not shatter. Startled and afraid, the waiting train passengers rushed to leave the waiting room as heartbreaking screams of children echoed through the hall.

In the cramped bomb shelter – a damp space about 25 feet wide by 12 feet long lined on three sides by timber-framed bunk beds – people sat on the lower bunks, while others sat on the floor or simply stood waiting for the shelling to subside.

Two dogs, a Dachshund and a Pug in a fancy, black puffer coat, quietly growled at each other, while individuals in the shelter stayed silent, almost motionless.

A 17-year-old student, Nazari, accompanying his 12-year-old sister, said he was from Stanytsia Luhanska, a town close to the frontline of the war that began in 2014 and has experienced intermittent shelling and shooting ever since.

Since February 16, pro-Russian forces increased their shelling of the town, the boy said.

Nazari, who originally provided his full name, called his relatives, who then asked that this reporter print only his first name because his family, still in Russian-held territory, could be punished for speaking with the press. In fact, most individuals interviewed for this story who were in or from the occupied territory were not comfortable with being identified, though they did want to speak about the war.

“The Russians fired 10 shells for every one the Ukrainian side used,” Nazari said. “There was a lot of destruction in our town and many dead and wounded.”

The Russian army, which had previously tried to conceal its presence in Luhansk, poured artillery – including devastating “grad” missiles – down onto the town, Nazari said.

Nevertheless, Moscow still ludicrously insists that only “separatist” forces are fighting in the Luhansk and Donetsk oblasts.

By about 12.30 p.m. on Saturday, a train finally arrived. Shelling resumed as passengers scrambled aboard. It continued as the train picked up speed.

It took five and a half hours for the train to reach Popasna, a town just 37 miles away. Railway staff would only say the delays were “because of fighting.”

The train sat in Popasna for nearly three hours.

Shelling began again and each explosion seemed to creep closer toward the train. The tension among passengers increased, as some people prayed, and somewhere a woman laughed uncontrollably. In one train compartment, a woman told her seven-year-old daughter to lie on the floor and put her fingers in her ears to block out the sound of explosions.

Relief swept through the carriages when the train finally moved.

The mere motion of the train felt as if passengers were leaving danger behind. But this, of course, was just wishful thinking.

Jana, 43, travelled alone. She left behind her husband, a Ukrainian border guard near the city of Cherkassy.

“He just came home on Friday and insisted I pack a bag,” she said. “He was worried that the Russian forces were going to overwhelm our side. We had very little time to say goodbye. I hope I will see him and our home again, but I don’t know what the next few days will bring.”

Maya, 38, whose husband is also in the military, was traveling with her sons, Danylo, age 7, and Ivan, age 8.

The two boys were aware of the war, but they seemed composed thanks to their mother’s calm demeanor. They played games on a mobile phone until their mother laid them to sleep. Only when their eyes were closed did she clasp her head in her hands and whisper to herself.

One passenger, Vitaly, a tall and fit man, seemed to have the bearing of a soldier. Vitaly had, in fact, spent three years in the Ukrainian Army. During his time in the military, which ended in 2020, Vitaly said he fought pro-Russian forces in his native Luhansk.

He also took part in a six-week special fighting skills course taught by British Army trainers. Vitaly said he wanted to reach Kyiv and join his country’s defense of capital.

After the train stopped at a junction in the town of Liman, passengers going to Lviv via Kyiv boarded a different train across the platform. That train spent 24 hours waiting for their arrival.

“I know how to fight and I couldn’t bear to stick around in Stanytsia Luhanska being shelled by the stupid bastards there. So, I’m going to Kyiv. Whatever happens, we have to kill as many of them as we can and show that we did our best,” Vitaly said.

Though they did not know it at the time, the town of Popasna was the last place they experienced shelling during their journey to the west of Ukraine.

As dawn broke on Sunday morning, the train slowly passed through the city of Dnipro, which straddles Ukraine’s largest river of the same name. The train curved northwest through magnificent landscapes of river, lakes, forest and low hills on one bank of the river.

On the other side, the tilled, black earth of the Ukrainian steppe stretched away to the horizon. That rich soil has historically made Ukraine “the breadbasket of Europe.” For centuries, it has also attracted invaders.

Though the bombing stopped, railway staﬀ repeatedly stopped the train to find safe routes west. As a result, the train meandered along local rail lines. In normal circumstances, it would have taken one of two main lines passing through the large towns of Vinnytsia or Zhytomyr, but both of those routes were hit by Russian missiles.

At one stop, train conductors handed out fruit juices, bananas and mandarins donated by the town’s mayor for child refugees.

Danylo, the 7-year-old boy who was travelling with his mother and older brother, eagerly opened his juice.

One more anxious night passed and then the train pulled into Lviv’s main railway station at 5:30 a.m. on Monday.

Disembarking passengers pushed their way through crowds of people desperate to board trains headed westward out of Ukraine to Poland, Slovakia, Hungary, Romania or Moldova.

Some fights broke out as people mobbed already-packed trains.

Exhausted passengers from Luhansk completed one grueling trip, though their journey out of Ukraine and to safety was far from over.