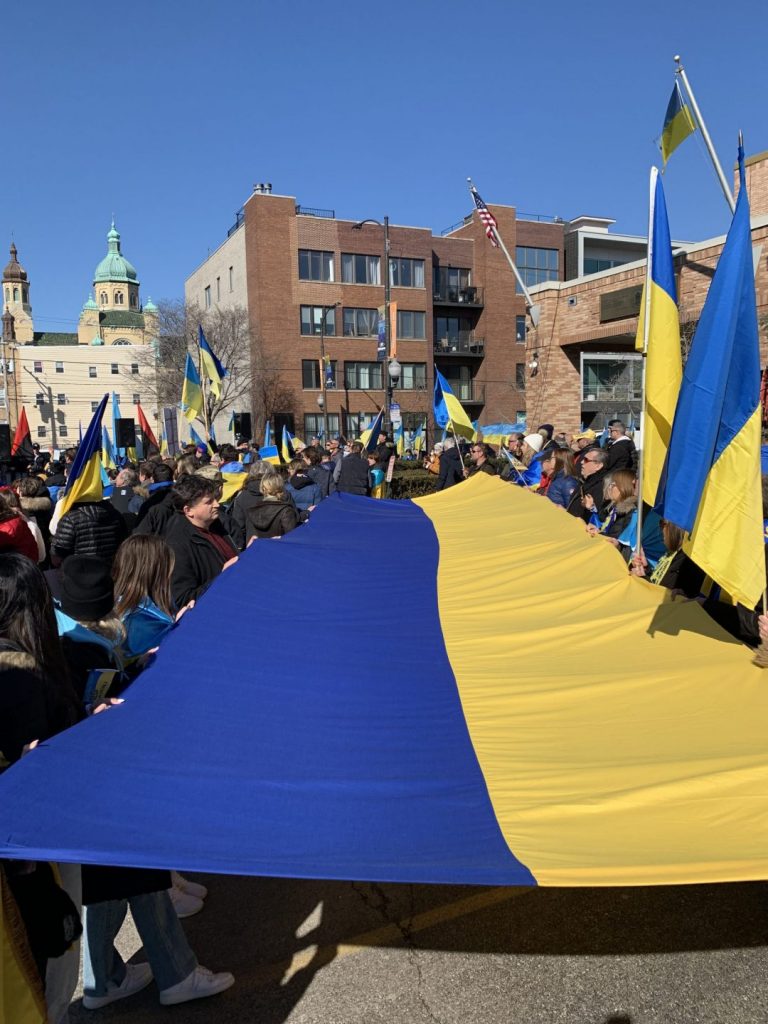 Mark Raczkiewycz
An unfurled Ukrainian flag is held during a pro-Ukrainian rally at the parking lot of the Cultural Center that is attached to the Saints Volodymyr and Olha Ukrainian Catholic Church in Chicago on March 13.

CHICAGO – The U.S.’s second-largest concentrated population of Ukrainians held a second rally on the 18th day of Russia’s invasion of their homeland with dual demands for a no-fly zone to be enforced over Ukraine’s skies and for China to stop buying Russian petroleum products.

Several hundred Ukrainian Americans assembled in the heart of Chicago’s Ukrainian Village neighborhood on March 13 at the premises of Saints Volodymyr and Olha Catholic Church. The rally was organized by the Illinois Division of the Ukrainian Congress Committee of America (UCCA).

Ihor Diaczun, the event’s master of ceremonies and head of the UCCA’s local chapter, said that Kremlin leader Vladimir Putin “is trying to deprive Ukraine of its independence” and described the ongoing war as Kyiv’s fight “for freedom and democracy” in a struggle that will ultimately lead “to victory.”

As Ukraine – a nation of more than 40 million people that is the size of France or Texas – faces relentless Russian bombardment of civilian areas and infrastructure, demands for an imposition of a no-fly zone over Ukraine have increased.

“We will not accept any ultimatums, especially on our territory [regarding negotiations]with Russia,” said Serhiy Koledov, Ukraine’s consul general in Chicago. There must be a “no-fly zone” imposed, he added.

Repeated demands by Kyiv officials, including President Volodymyr Zelenskyy, for the U.S. and NATO to help protect Ukrainian airspace from rocket attacks and bombings have been rejected.

“Although there has been much discussion of a ‘no-fly zone’ over Ukraine, this requires enforcement by NATO aircraft and would quickly result in confrontation with Russia,” the London-based Chatham House think tank wrote on March 8.

Russia has already warned that it is considering striking military supply chains from the West entering Ukraine. Kyiv has received or bought effective war drones from Turkey, as well as anti-armor and air-defense weapons from the U.S., Britain, Canada and other countries while fiercely resisting a superior foe.

Mr. Zelenskyy said that about 1,300 Ukrainian soldiers have been killed while Russian combat losses are approaching 13,000 military personnel.

The United Nations’ High Commissioner for Human Rights says that 636 Ukrainian civilians have been killed since Russia renewed its invasion of its neighboring country. Another 1,125 have been injured as of March 14.

Kyiv says the figure surpasses the international organization’s account even at one city – in the Azov Sea coastal city of Mariupol in the Donetsk region: more than 1,500 people have been killed by Russian bombardment as of March 15, the State Emergencies Service says.

“I reiterate that if you do not close our sky, it is only a matter of time before Russian missiles fall on your territory, on NATO territory, on the homes of NATO citizens,” Mr. Zelenskyy said in his daily address to the nation on March 14.

Mr. Koledov also said that Ukraine’s maritime shipping remains choked by Russia amid the invasion. A clear Russian military objective is to land lock the country and deprive it of access to sailing through the Azov and Black seas.

More than 100 ships are currently docked at Ukrainian ports and blocked from disembarking, he said during the two-hour assembly.

Taking to the stage afterward was Sen. Dick Durbin (D-Ill.) who touted $13.5 billion in additional U.S. military and humanitarian assistance to the war-torn country in a bipartisan deal that was reached earlier this month.

“There is a special room reserved for Putin alongside [Soviet dictator Josef] Stalin and [German dictator Adolf] Hitler somewhere,” the lawmaker said.

Speaking of Ukraine’s place in the European Union (EU) and defense bloc NATO, U.S. Rep. Mike Quigley (D-Ill.) said the country “has earned its place” in both blocs.

“Ukraine has always stood for freedom, self-rule, … and it has earned the support” of both entities, he said.

After participating in a video call with the Ukrainian president last week, the congressman said that “Ukraine won’t be exterminated by this [Putin’s] dictatorship.”

Holding a Ukrainian flag along Chicago Avenue, one of the city’s main thoroughfares, Demetrei Siryk, 65, said he was attending the UCCA-organized rally for the second time to protest “genocide in Ukraine.”

“I’m doing what I can, donating money, going to protests. … I’m carrying on the tradition of my parents even though I was born here [in the U.S.],” Mr. Siryk said.

At 3:30 p.m., a contingent of the rally went to Chicago’s downtown near Lake Michigan to the Chinese consular office to urge the world’s second-largest economy to stop buying Russian oil and gas.

About 15-20 percent of Russia’s yearly economic output is comprised of oil and gas revenues, according to Reuter’s news agency.

Meanwhile, volunteers from the Hromovytsia (thunder) Ukrainian dance troupe inside the church’s cultural center were packing boxes with humanitarian assistance for their homeland where supply chains for essential goods and medicine is severely disrupted.

The shipments go to Poland and then usually get transported by ground into Ukraine from where they get distributed to besieged cities.