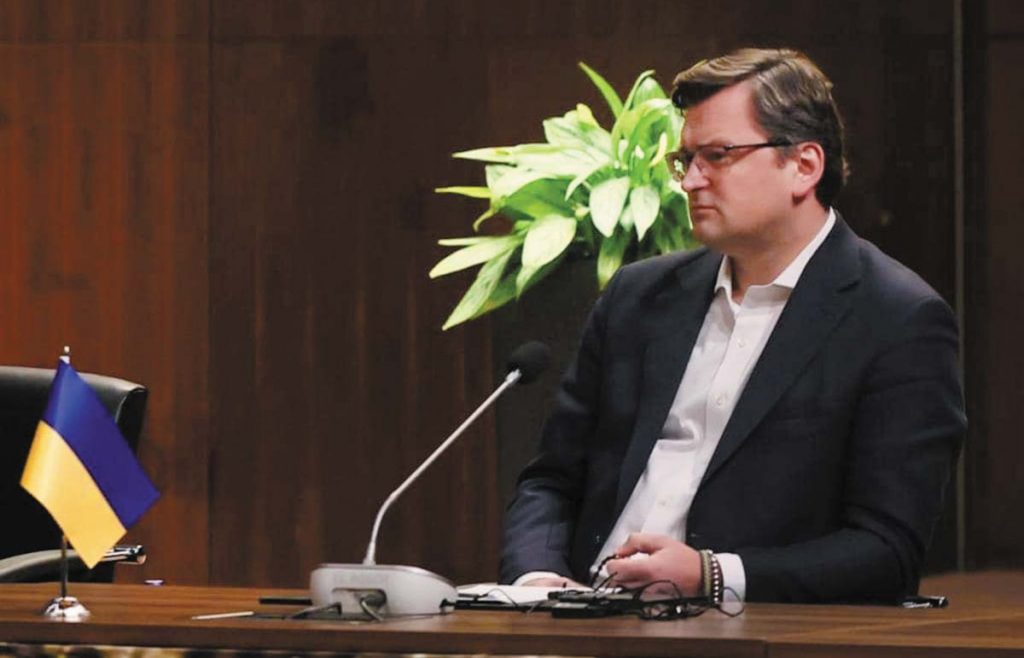 LVIV – As Russia’s unprovoked and premeditated war against Ukraine stretches into its third week, Russian and Ukrainian officials met to discuss the terms of a possible ceasefire and the establishment of humanitarian corridors that would be used to safely move refugees from areas hardest hit by the violence.

Russian forces have been slowed in their advance on various Ukrainian cities and they have instead focused on indiscriminate shelling civilian, non-military locations, including hospitals, residential apartment complexes, homes and even the very humanitarian corridors that were previously established to ferry civilians out of danger.

Despite being severely outgunned and outmanned, Ukrainians are nonetheless full of hope. The country’s army has put up a spirited, heroic defense that has in several instances successfully pushed back Russian troops.

As thousands of ordinary citizens in temporarily occupied towns protest Moscow’s war against Ukraine, the international community has stepped up economic sanctions on Russia.

Ukrainians have little hope in a diplomatic solution, but officials representing the Ukrainian government met with their Russian counterparts to seek a peaceful end to the war.

On March 9, Ukrainian President Volo­dymyr Zelenskyy once again declared his readiness to sit down at the negotiating table with Russian President Vladimir Putin. Mr. Zelenskyy said he believes that Russia’s war against Ukraine can only be stopped by speaking directly with the Russian ruler.

Mr. Zelensky has repeatedly called on Putin to speak with him directly. Putin has not accepted the offers.

Mr. Zelenskyy, speaking with Bild TV, said “the Russian side must also be ready to compromise – that’s why they are called compromises.”

The president confirmed that he has not had direct contact with Putin, but he said that, “only after direct talks between the two presidents will we be able to end this war.”

Ukrainian and Russian officials previously met on multiple occasions since the full-scale war began on February 24. Three meetings between the two countries were held in Belarus and the talks concerned mostly discussion of humanitarian corridors.

The most recent negotiation, held in Antalya, Turkey, was the first high-level meeting between the foreign affairs ministers of Ukraine and Russia since the full-scale war began. The talks were moderated by Turkish Foreign Affairs Minister Mevlüt Çavuşoğlu.

Russia repeated its demand to “denazify” Ukraine, recognize the separatist-controlled territories of Luhansk and Donetsk as independent, and recognize Crimea as Russian territory. Moscow has also sought a regime change in Kyiv.

The head of the Presidential Office of Ukraine, Andriy Yermak, said that it was a mystery to him what “denazification” of Ukraine means.

Mr. Zelenskyy said that he is willing to consider some compromises. Still, Ukraine has ruled out ceding any territory and is pushing for security guarantees from the U.S. and Germany, alongside European Union membership, all of which could be unacceptable for Russia, which seeks Ukrainian “neutrality.”

Mr. Kuleba called for the creation of a humanitarian corridor to evacuate civilians from Mariupol, Ukraine, and to deliver humanitarian aid to the besieged city. He also called for a 24-hour ceasefire to address the most critical humanitarian issues.

At the press conference following the meeting, Mr. Kuleba stressed that Mr. Lavrov was not authorized to provide guarantees on both issues, but he said he urged the Russian official to pass Ukraine’s request for a humanitarian corridor on to the Russian government.

“I heard from the Russian side today that they link the ceasefire to Putin’s demands on Ukraine. Ukraine has not given up and will not give up. We are ready for diplomatic decisions, but, while they are not there, we will selflessly defend our land from Russian aggression,” Mr. Kuleba said.

Turkey is expected to play an important role as a mediator that can help end Russia’s war against Ukraine. The country was represented at the talks by Foreign Affairs Minister Mevlüt Çavuşoğlu.

Mr. Kuleba expressed gratitude to Turkey for its political and humanitarian support of Ukraine against the backdrop of Russia’s barbaric war against the Ukrainian people. Mr. Kuleba informed his Turkish counterpart about the current situation in Ukraine. He spoke about the issue of war crimes and targeted shelling by Russian troops of civilian facilities in Ukrainian cities. Russian artillery fire has killed civilians, including children.

“Russia’s military is barbarically shelling hospitals, kindergartens and homes,” Mr. Kuleba said. “Civilians are being killed and injured. A particularly high-profile crime is the aerial bombing of a maternity hospital and children’s hospital in Mariupol. The world must act decisively to stop war crimes and crimes against humanity on the part of the Russian Federation.”

“Ukraine has arrived for talks with a strong position. Thanks to the steadfastness of the president of Ukraine, Volodymyr Zelensky, our diplomacy, our defense forces, the entire Ukrainian people and the support of our partners, the Russian invaders are receiving a decent rebuff on all fronts,” Mr. Kuleba said.

He outlined three key issues he insisted on at the meeting with Mr. Lavrov.

“Immediate ceasefire, improvement of the humanitarian situation in Mariupol, Kharkiv, Sumy, Volnovakha and other Ukrainian cities, and withdrawal of Russian troops from Ukraine,” Mr. Kuleba said.

He called on Turkey to continue working with Moscow to stop the bloodshed in Ukraine.

“To date, there are no results that significantly improve the situation, but consultations will continue,” Mykhailo Podoliak, adviser to the head of the Presidential Office of Ukraine, said after that meeting.

On February 28, the Ukrainian and Russian delegations held a first round of talks in Belarus. According to Mr. Podoliak, negotiations between the delegations were difficult and did not result in any significant progress on bringing peace to Ukraine.

A second round of talks between the Ukrainian and Russian delegations took place on March 3, but it did not achieve any significant results.

“There is no world security system anymore. After the start of the war, this is obvious. It must be built from scratch,” said Andriy Yermak in an interview with Ukrainska Pravda. “And, of course, we are primarily interested in building this system of world security, in which Ukraine will have certain real, legally established [security]guarantees.”

Mr. Yermak said Ukraine recalls the experience of the Budapest Memorandum, which was concluded in 1994 and sought to provide Ukraine with some security assurances after Kyiv peacefully gave up what was at that time the third largest nuclear arsenal in the world.

“This is a tragic experience paid for by the blood of our people,” Mr. Yermak said. “And so, today, we will not agree to any chatter. We will talk only about … Ukraine’s international security system.”

“Everyone understands that Ukraine is fighting not only for itself, but also for Europe and the whole world. Therefore, they all understand that helping Ukraine is not charity. … And every dollar invested, every little help to Ukraine, is worked out by our heroes who risk their lives,” Mr. Yermak said.