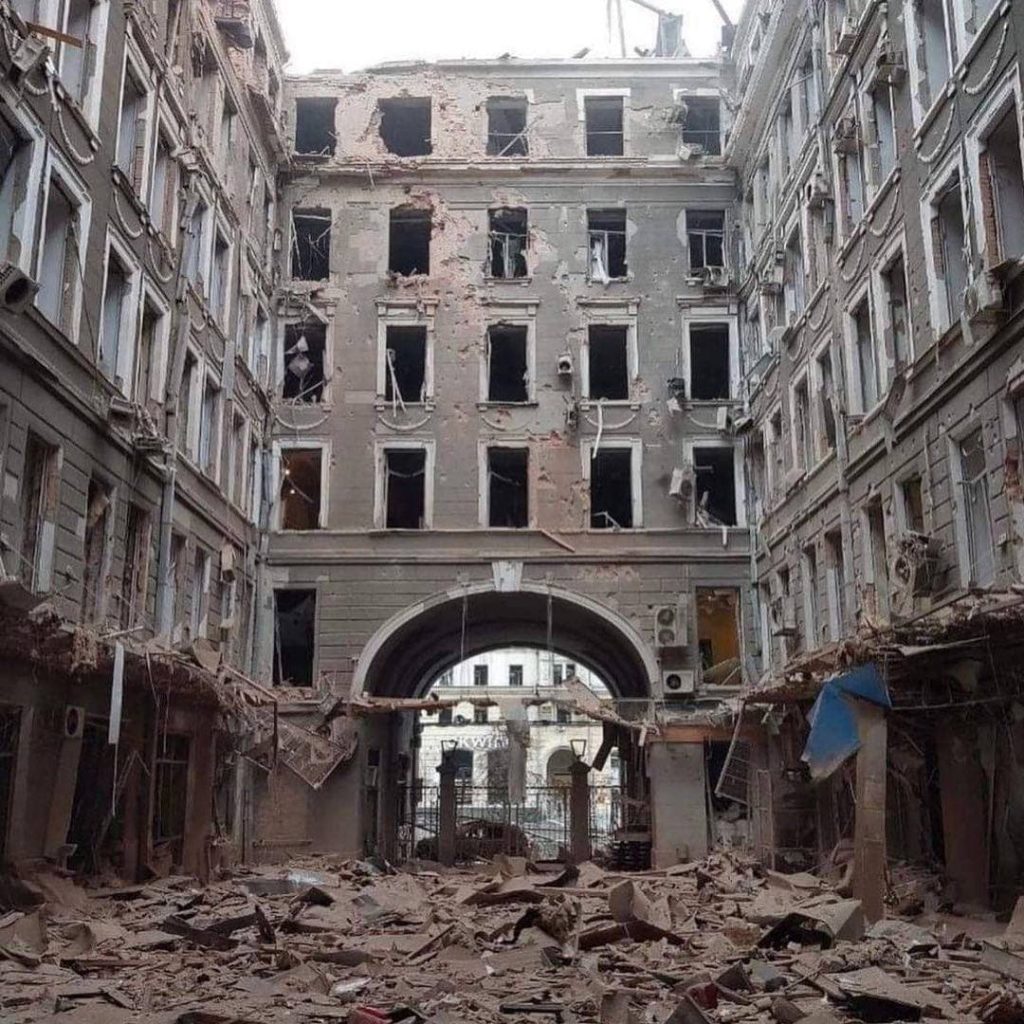 (Editor’s note: The following article was written in a fluid situation and from an undisclosed location in Ukraine. It contains information that was current as of noon Kyiv time on March 3.)

UKRAINE – Russia has made little appreciable headway in its attempt to conquer Ukraine with a multi-pronged invasion that started on February 24. Russia’s full-scale invasion of Ukraine is an unprovoked and massive escalation of war that Moscow began in 2014. With most of their ground forces repelled or halted by a stiff and heroic Ukrainian resistance, Russian forces have resorted to indiscriminate bombing and shelling of civilian areas that have struck schools, hospitals and other civilian infrastructure.

Fierce fighting has occurred in the south of Ukraine, where Russia invaded from occupied Crimea and simultaneously attacked five regions. After a week of slowly advancing, Russia occupied the first sizeable urban area – the vital port city of Kherson, situated at the intersection of the Dnipro River and the Black Sea. Russian troops were also seen entering Melitopol on March 2 in the southern region of Zaporizhia.

As of March 3, Ukraine estimated that some 9,000 Russian military personnel had been killed or wounded. The previous day Russia said it had lost less than 500 soldiers with 1,597 wounded, yielding a strange 1-to-3 kill-to-wounded ratio.

Civilian casualties are mounting due to Russia’s use of various short- mid- and long-term rockets and artillery. The State Emergency Situations Service of Ukraine said 350 civilians have been killed and more than 2,000 wounded.

More than 1 million people have fled Ukraine since Russia launched the fuller-scale invasion from locations in Belarus, Russia and the Russian-occupied parts of the Donbas and the Crimean Peninsula, the UN Refugee Agency said on March 3.

Ukraine’s military reported capturing Russia’s invasion plans. Pictures posted by the Armed Forces of Ukraine show the invasion was approved on January 18 and it envisioned occupying the country in 15 days.

A second round of negotiations between mid-level delegations from Ukraine and Russia were to take place on March 3 in Belarus near the Polish border. Kyiv said it did not expect a breakthrough as the first meeting ended inconclusively.

Kkarkiv, the second largest city in Ukraine located 40 kilometers from the Russian border, is encircled and has faced relentless bombardment and destruction. Donetsk region’s second largest city, Mariupol, located along the coast of the Azov Sea, is also encircled and faces incessant bombardment. Russian shelling also wreaked havoc in civilian areas in Sumy and Chernihiv in the northeast of Ukraine.

Due to the indiscriminate shelling, Ukraine’s Special Forces released a statement saying they would not take Russian artillerists alive.

Ukrainian President Volodymyr Zelenskyy said that Russia will soon learn the word “reparation” for the carnage it is unleashing.

“We will restore every house, every street and every city,” Mr. Zelenskyy said in his latest video address to the nation.

Russia is trying to encircle Kyiv, but it has been stopped by Ukrainian forces, which showed video footage of their soldiers raising the national flag in Bucha, a satellite city northwest of the capital.

Meanwhile, long-range rockets struck locations around Kyiv, including the main television tower, and debris from an intercepted rocket heading toward the Defense Ministry fell at the south end of the capital’s main train station.

Four explosions were heard overnight in Kyiv on March 2-3, but the Defense Ministry had not reported where they occurred, nor did it say what locations were hit. But residents on social media said the explosions occurred in the central Pechersk district.

National Security and Defense Secretary Oleksiy Danilov reported that the Donetsk regional town of Horlivka, which is in the east of the country and has been occupied for 8 years, was liberated from occupying Russian forces.

Video posted on social media, along with reports from the military, showed that a Russian airborne and ground assault on the southern port city of Mykolayiv had been repelled. Killed and captured Russian paratroopers and destroyed combat armor were shown on social media by local residents.

The Black Sea port city Odesa is bracing for a possible naval attack. Residents there have spent the week building defenses and erecting “hedgehog” steel barricades.

In occupied Kherson, Mayor Ihor Kolykhayev on March 3 said on social media that “there were armed visitors in the city council” who imposed their control over the city.

He said the Ukrainian flag “is allowed to hang over us,” but with certain conditions imposed by the Russians, among them a curfew from 8 p.m. to 6 a.m. and cars are only allowed to drive during daylight. Vehicles can only enter the city transporting vital supplies, such as food and medicine. Residents can walk alone or in groups of two, but they are not allowed to confront Russian forces.

In the west, Ukraine constantly reports “demonstrative” military activity at the Ukrainian-Belarusian border, but, so far, no Russian or Belarusian ground forces have invaded the neighboring Volyn region. Strict curfews have been enforced in western cities. A ban on the sale of all alcoholic beverages has been imposed in Lviv and schools nationwide have suspended instruction.

Mr. Zelenskyy, in his daily video address, said that approximately 16,000 foreigners are on their way to join Ukraine’s foreign legion.

He vowed Ukraine would win this war.

“We have survived two world wars, three famines, the Holocaust, Babyn Yar, the Great Purge, the Chornobyl explosion, the occupation of Crimea and the war in the east of our state,” he said in the same address. “They [Russia] wanted to destroy us so many times, but they couldn’t.”

Besides foreigners coming to help fight, a number of countries and organizations continue to provide weapons and financial assistance to the war-torn country.

Billions of dollars have been pledged in various forms and Ukraine was granted 70 fighter jets, additional anti-armor and hand-held air defense rockets in recent days.

He said 19 countries have provided lethal weapons, some of them like Germany and the European Union have done so for the first time. Ten countries “are providing macro-economic financing and 22 countries are providing humanitarian assistance,” Mr. Kuleba added.

More than $1 trillion worth of Russian assets have been frozen by sanctions imposed by the West and other countries, French Finance Minister Bruno Le Maire told a local TV channel, as reported by CNN.

Subsequent rounds of sanctions levied by the U.S., the EU, Britain, Canada, Australia, Japan and even historically neutral Switzerland, have begun to cripple Russia, the world’s 12th biggest economy.

Several Russian banks have been cut off from the Belgium-based interbank communication SWIFT system. Russia’s central bank is facing difficulty accessing its foreign currency reserves and several countries are trying to prevent it from obtaining new currencies and selling current ones to prop up its fast-depreciating ruble, which is now worth less than one U.S. penny.

The latest round of restrictive measures, which also affect Belarus, were announced on March 2. The U.S., together with allies and partners representing more than half of the world’s economy, will “further” isolate “Russia from the international financial and trade system,” the White House said in a statement.

An international task force is being set up to go after the luxury assets of Russian President Vladimir Putin’s “cronies and their families by identifying and freezing” them, U.S. President Joe Biden said.

Those assets include yachts, luxury apartments, money, “and other ill-gotten gains,” he added.

For its part, Kyiv is moving to seize all the assets of Russian legal entities in Ukraine. A Verkhovna Rada legislative committee endorsed a bill to “nationalize” those assets. The next parliamentary voting sessions are scheduled to take place on March 15-18, but it’s not clear if members of parliament will vote on the measures.

Ukraine succeeded in achieving four victories in the international arena this past week.

The International Criminal Court in The Hague confirmed it will “proceed with opening an investigation into the situation in Ukraine as rapidly as possible.” That investigation will examine whether Russia has committed war crimes in Ukraine.

The decision was based on the requests of 39 member states. Since Ukraine hasn’t ratified the Rome Statute, it couldn’t initiate the process.

Meanwhile, the International Court of Justice, the main judicial body of the UN, said it would hold public hearings on March 7-8 regarding “allegations of genocide under the Convention on Prevention and Punishment of the Crime of Genocide.” The case will be brought by Ukraine against Russia.

The UN General Assembly voted overwhelmingly to approve a resolution, co-sponsored by more than 90 countries, to condemn Russia’s aggression. The resolution calls for Russia to immediately stop its war against Ukraine.

Of the nearly 200 member states, 141 supported the motion, five voted against – Russia, Belarus, Syria, North Korea and Eritrea – and 35 abstained, including China and India.

And on March 1, the European Parliament voted to approve Ukraine’s status as an EU member candidate country.

War in Ukraine: Volodymyr Yermolenko talks about Ukrainian identity and the Russo-Ukrainian war