Ukrainian refugees in 2014 and 2022: An analysis and proposed solution 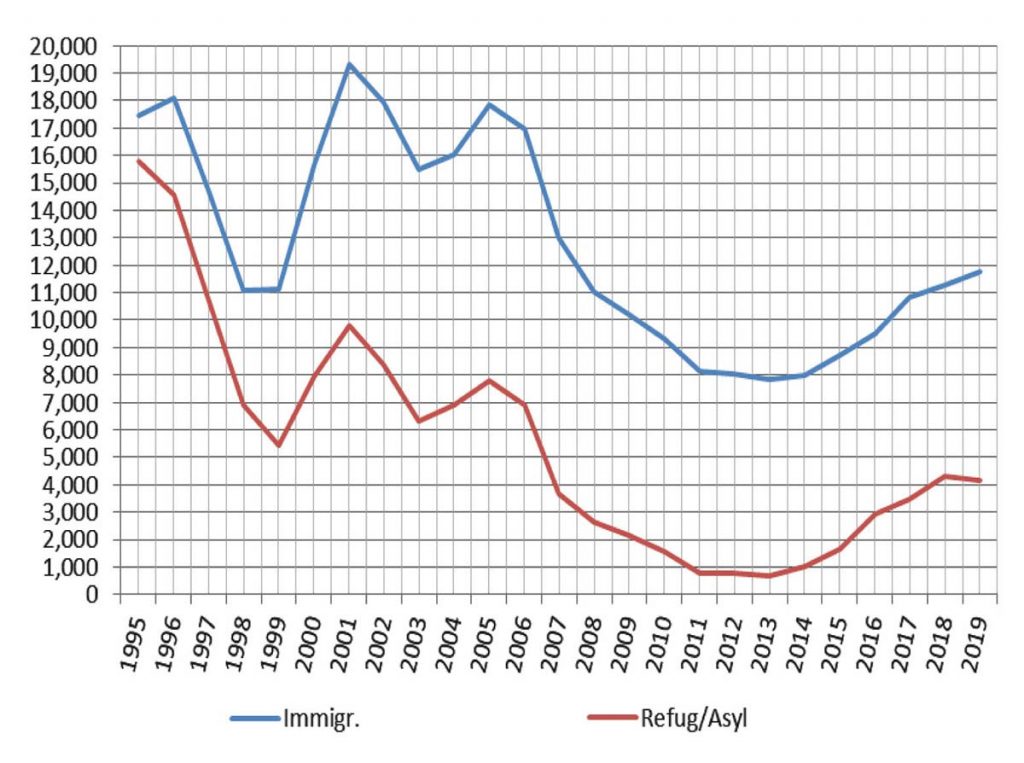 The annexation of Crimea and the invasion of eastern Ukraine by Russia in 2014 produced many consequences. One of them was the displacement of a large number of persons within the territory of Ukraine. This displacement created a severe internal refugee problem. The exact number of displaced persons is unknown, but estimates are in the range of between 1.5 and 2 million people. U.S. immigration statistics show that the Russian attack also caused a significant increase in the number of refugees and asylum seekers admitted to the U.S. The current full-scale, unprovoked and premeditated war launched by Russia on Ukraine on February 24 may result in a much larger number of refugees to the U.S.

Below is a brief description of the role that refugees and asylum seekers have played in the most recent migration from Ukraine to the U.S. It suggests some lessons that can be learned from that experience which can be applied to the current refugee crisis in Ukraine. This is but one example of how U.S. statistics can provide helpful information about Ukraine and the relationship of its population with the U.S.

More than 300,000 persons born in Ukraine migrated to the U.S. between 1988-2019. This immigration wave was made possible by a provision enacted by the U.S. Congress known as the Jackson-Vanik Amendment of the Trade Act of 1974. This amendment forced the Soviet Union to allow certain religious groups, mostly Jews and some Protestants, to emigrate from the Soviet Union. Many migrated to the U.S. and most were admitted as refugees.

The U. S. immigration service started to identify immigrants as specifically coming from Ukraine in 1995; up until that point, their country of origin was listed as the “Soviet Union.” The number of immigrants for the 1989-1994 period can be estimated from the American Community Survey, which shows that they averaged about 18,500 per year. There were 16,000 and 15,000 immigrants, respectively, in 1995 and 1996, with 91 and 81 percent of this number being refugees. It is safe to assume that similar proportions of refugees were present in previous years. A large number of these refugees were processed by 1996, and then the total number of immigrants declined in parallel with the decline in the number of refugees.

Emigration to the U.S. and other countries became possible for all citizens of Ukraine after its independence in 1991. A new type of immigration wave replaced the first wave in that the new wave was not dominated by refugees. The dynamics of this new wave had three elements: a diminishing proportion of persons who self-identified as Jews; an increasing proportion of persons who self-identified as Ukrainians and other nationalities; and low proportions of refugees. This wave reached a maximum of 19,300 in 2001 and hovered around 18,000 until 2006. Increased emigration opportunities to Europe reduced immigration to the U.S, and the number of Ukrainian immigrants to the U.S. declined steadily and reached a minimum of 8,000 in 2013, among whom only 689 were refugees.

This increase in refugees is almost certainly related to the 2014 Russian invasion of Ukraine. The invasion of Crimea started in February and of Donbas in March 2014, that is, in the middle of fiscal year 2014 that started on October 1, 2013, and ended on September 30, 2014 (immigration data are tabulated by fiscal year). The increase in the number of refugees began in fiscal year 2014. Further increases in the registration of refugees until 2018 were a function of increased applications

A certain number of the now millions of refugees displaced by Russia’s full-scale war on Ukraine will want to settle in the U.S. According to The New York Times (March 11), “Ukrainians have been crossing the border [of the U.S.]in greater numbers, with 1,000 apprehensions in the first four months of fiscal 2022 … compared with 676 in 2021. … Ukrainians in the U.S. have been inundating immigration lawyers with calls asking how they can sponsor relatives stranded in Poland and other countries.”

The normal process of admission to the U.S. as a refugee is lengthy and complicated.  To apply for asylee status, one already has to be in the U.S. or to seek admission at a port of entry.  Few among the millions of Ukrainian refugees have the knowledge, contacts and financial means to travel to Mexico and then to get to the U. S. border.

Thousands of Americans have expressed their willingness to welcome refugees into their homes and provide assistance. Thus, there will be no shortage of volunteers willing to help them once they arrive in the U.S. What is urgently needed, however, is a comprehensive legal mechanism that will allow for a timely and efficient migration process.

One possible mechanism is the Lautenberg Amendment, Public Law 101 167, enacted on November 21, 1989, and renewed annually by the U.S. Congress. This amendment allowed those groups covered by the legislation (nationals from the former Soviet Union, Estonia, Latvia or Lithuania who are Jews, Evangelical Christians, Ukrainian Catholics or Ukrainian Orthodox and other religious minorities from some Asian countries) to prove that they are eligible for special refugee status “with a credible, but not necessarily individual, fear of persecution.” By contrast, the Immigration and Nationality Act “requires prospective refugees to establish a well-founded fear of persecution on a case-by-case basis.” Besides being a more straightforward mechanism for refugee status approval, the Lautenberg Amendment provides Social Security, Medicaid, Food Stamps and Temporary Assistance for Needy Families.