Ukrainian supporters rally in Washington to protest Russia’s war on Ukraine, call on more U.S. support and aid for the besieged country 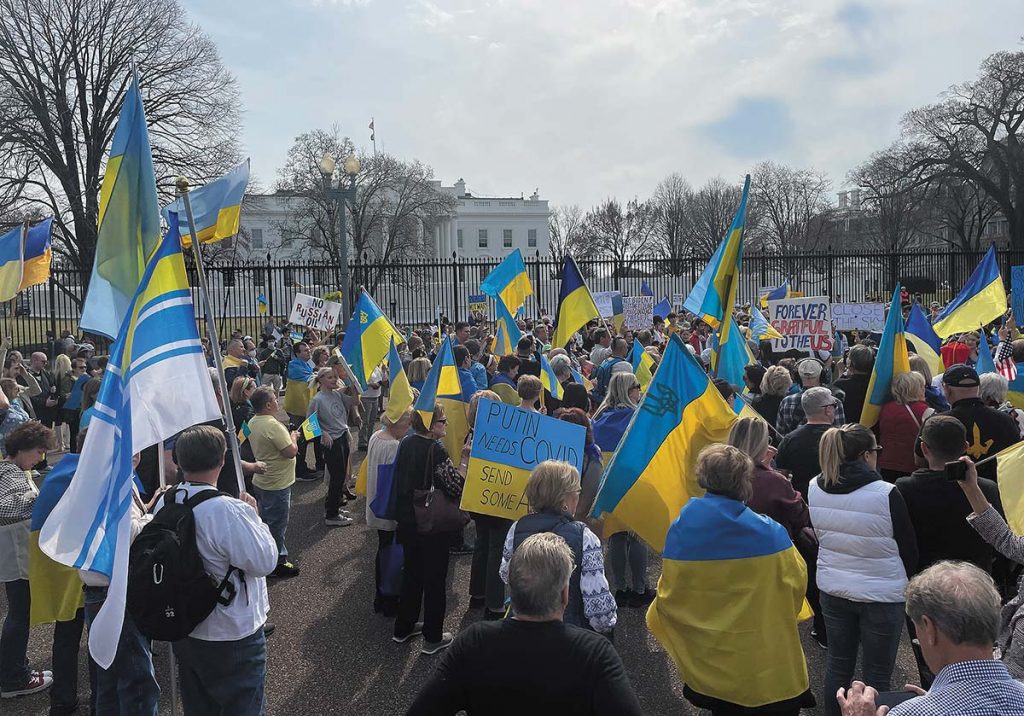 Roma Hadzewycz
More than 1,000 people took part in a rally on March 6 in front of the White House to protest Russia’s unprovoked and premeditated war on Ukraine.

WASHINGTON – More than 1,000 people took part in a rally on March 6 in front of the White House to protest Russian President Vladimir Putin’s unprovoked and premeditated war on Ukraine. The group also called for further action to support the people and government of the war-torn country.

The rally was the second to be organized in as many weeks by the Ukrainian Congressional Committee of America (UCCA) and the Ukrainian National information Service (UNIS).

Former U.S. Ambassador to Ukraine William B. Taylor, Jr., addressed participants of the rally. As did U.S. Sen. Rob Portman (R-Ohio), who said he supported several measures to help Ukraine.

Mr. Portman said the U.S. should encourage Ukraine’s neighbors to transfer older fighter jets to Ukrainian pilots. The U.S., he said, would then replace the donated MiG planes.

On March 8, Poland said it was ready to hand over all of its MiG-29 jets to a U.S. air base in Germany. Ukraine’s neighbor also urged other NATO members with the same type of Russian-made warplanes to do the same, the Foreign Affairs Ministry said. The announcement caught the U.S. off guard, as a U.S. official later said the announcement was a “surprise,” according to an RFE/RL report.

The Poles did not inform the Biden administration prior to making the announcement. The Pentagon quickly dismissed the idea as untenable.

On March 9, Polish Prime Minister Mateusz Morawiecki said that, any decision on getting the MiG-29 planes to Ukraine would be up to the United States and NATO. He stressed that the move would only be made if all of the nations involved agreed.

“Poland is not a side in this war,” he said, adding, “Such a serious decision like handing over planes must be unanimous and unequivocally taken by all of the North Atlantic Alliance.”

U.S. Vice President Kamala Harris has arrived in Warsaw on March 9 to continue talks with the Poles about getting fighter jets to the Ukrainians during her visit to Warsaw, according to a senior administration official quoted by AP.

Meanwhile, at the rally in Washington, Mr. Portman also issued calls for the U.S. to stop buying Russian oil and to cut off all Russian banks from the international banking system. The senator said he hoped to see Russian commanders refuse to kill their innocent neighbors, and he wanted to see the U.S. move from freezing Russian assets to seizing them.

“Today I am announcing the United States is targeting the main artery of Russia’s economy. We’re banning all imports of Russian oil and gas and energy,” Mr. Biden said at the White House. “That means Russian oil will no longer be acceptable at U.S. ports and the American people will deal another powerful blow to Putin’s war machine.”

“This is a step we’re taking to inflict further pain on Putin,” Mr. Biden said.

Kurt Volker, a former U.S. ambassador to NATO, also addressed rally participants, saying that the United States was failing in its moral obligations to Ukraine.

“Eventually we will have to confront Putin,” he said, adding that “we should do this now.”

Mr. Volker was among individuals who have recently called for the implementation of a no-fly zone in Ukraine. He said it is possible to create a no-fly zone while minimizing the risk of escalating the conflict with Russia by limiting the zone’s geographical scope and agreeing not to initiate attacks.

The former ambassador also demanded the immediate implementation of safe zones for humanitarian aid into Ukraine and for the safe evacuation of refugees out of the country.

Mr. Volker emphasized that nuclear arms cannot be used as a threat, as doing so would allow other countries with nuclear weapons to do as they please.

The Estonian Ambassador to the United States Kristjan Prikk noted that his country has provided Ukraine with an extraordinary level support. That support has included Javelins, air defense equipment and medical supplies.

Radovan Javorcik, the ambassador of the Slovak Republic to the United States, pledged more military aid for Ukraine.

“Your freedom is my freedom,” Mr. Javorcik said during the rally in Washington.

Deputry Chief of the Latvian Embassy in the U.S. Juris Pekalis was given a rousing round of applause when he noted that Latvia supports Ukraine’s desire to achieve candidate status in the European Union.

The warmest welcome went to Adam Krzywosadzki, the deputy chief of mission at the Polish Embassy in the United States. Addressing the participants of the rally in Washington, Mr. Krzywosadzki spoke of the military, humanitarian and political aid that Poland has pledged for Ukraine.

Many rally participants and members of UCCA branches from nearby states came to the rally in Washington by bus. One such bus from Whippany, N.J., was funded by Selfreliance FCU of Whippany, N.J.