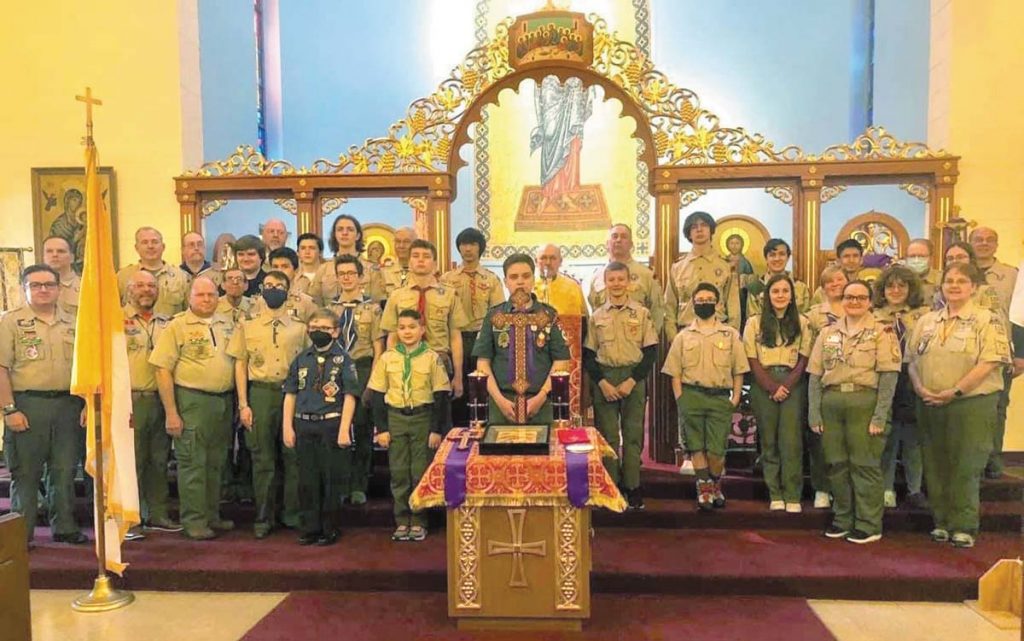 Joe Shatynski
Youth and adult leaders from the Boy Scouts of America’s Patriots’ Path Council, took part in a prayer service for Ukraine during a Divine Liturgy on March 13. The service was led by Father Vasyl Vladyka, pastor of Immaculate Conception Ukrainian Catholic Church in Hillside, N.J.

HILLSIDE, N.J. – The Immaculate Conception Ukrainian Catholic Church in Hillside, N.J., was blessed and honored to welcome over 35 members of the Boy Scouts of America (BSA), among them youth and adult leaders from the organization’s Patriots’ Path Council, for a prayer service for Ukraine during a Divine Liturgy at the church on March 13.

Before the Divine Liturgy began, the Scouts and the congregation sang “God Bless America.” The song, which is deeply moving from a spiritual and patriotic perspective, also has ties to the Scouting movement. Irving Berlin, the song’s composer, and his wife loved the Boy Scouts of America and Girl Scouts of the United States of America. They donated all of the royalties from this song to both organizations.

A very moving flag ceremony was performed with the American, Ukrainian and Vatican flags, while several troop flags remained posted nearby. The Ukrainian national anthem and the Star-Spangled Banner were also sung.

The BSA scouts joined parishioners in singing “Страдальна Мати” (“The Mournful Mother”) during Communion. This solemn and somber song portrays how the Blessed Mother felt while she saw her son Jesus on the cross. This song also evoked great emotion as the BSA and scouts and parishioners reflected on how the mothers in Ukraine today mourn the loss of their sons and daughters in this unjust war, though they are filled with faith and devotion to God and their country.

After the Divine Liturgy, as is customary during Lent, the parish held a service during which Father Vasyl read each of the individual names of the deceased that are in the “Scroll Book of the Departed.”

The Scouts added individual names of their deceased loved ones to a list, which Fr. Vasyl also read in order to remember those who have died in Ukraine as a result of the current war.

Additionally, the parish added Irving Berlin’s name to the list in appreciation of all that he did for scouting and to bring unity and patriotism to the United States. Mr. Berlin’s song is a gift that continues to inspire people year after year, decade after decade, generations of Americans.

St. John Chrysostom reminded the faithful about the importance of praying for the deceased.

“Let us assist them according to our power. Let us think of some advantage for them, small though it be, but let us assist them. How and in what way? By praying for them, by asking others to pray for them, and by constantly giving alms to the poor in their behalf,” he said.

The scouts helped the deceased by praying for the repose of their souls and they also gave alms to the poor on their behalf by collecting and donating funds for the suffering in Ukraine. By their actions, these scouts truly shined as leaders and role models.

With their presence and participation, the BSA scouts provided the parish in Hillside, N.J., and all of those suffering in Ukraine with a special gift. For that, the people of this parish will be eternally grateful to them.