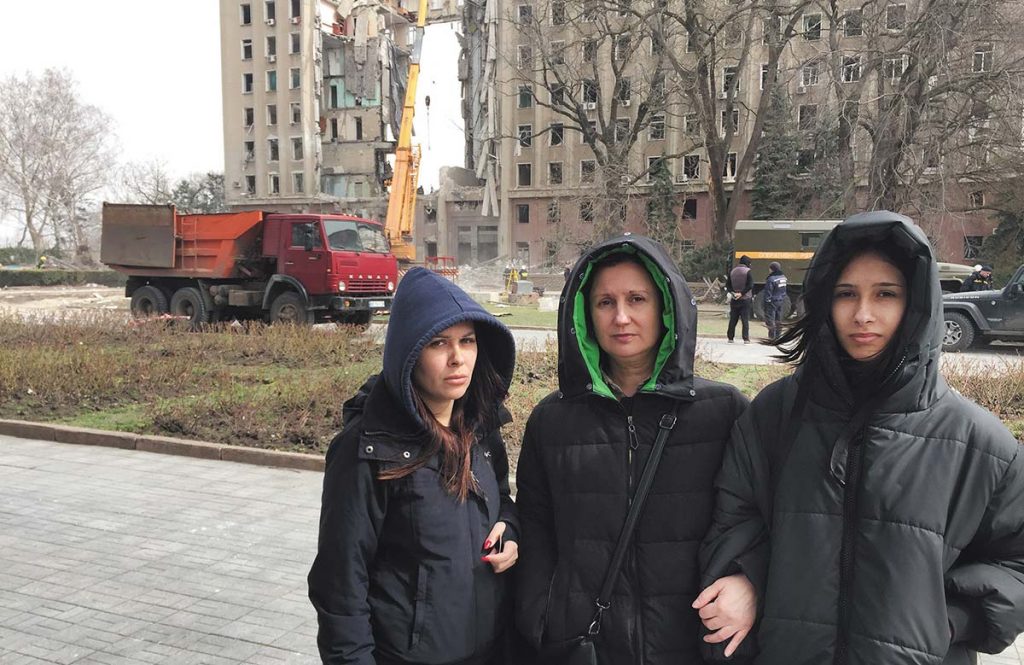 Askold Krushelnycky
Tetyana Khayitova (center), together with her sister-in-law Irena Khayitova (left) and her daughter Valeria Khayi­tova (right), stood in front of the ruins of the main administration building of Ukraine’s port city of Mykolaiv on April 1.

On April 1, Ms. Khayitova, her daughter Valeria and her sister-in-law Irena Khayitova were on the fourth day of a dreadful vigil near the ruins of the main administration building of Ukraine’s port city of Mykolaiv, which was devastated by a Russian missile that struck and demolished most of the structure killing and wounding dozens of people on the morning of March 29.

Tetyana’s husband, Stanislav, was one of some 200 people in the building when it was hit and on March 29, as corpses continued to be pulled from under the rubble, she was still hoping that he had somehow survived.

As observers on the scene looked at the building, Russian shells could be heard exploding close by. A rocket then flew overhead.

People ran to a basement doubling as a shelter near the remains of the ruined building. As they waited for sirens to sound the all-clear, the three women told this correspondent their story.

Broken glass from the government building and windows in other buildings that had shattered and spread the debris for a hundred yards crunched as people dashed to the entrance of the shelter.

By March 31, 28 dead bodies had been pulled from the rubble and more than 30 people were in the hospital, some with serious injuries, from the missile strike.

Tetyana, 52, said her husband was in charge of maintenance and security at the 10-story building which had housed the regional administration and the oﬃce of the Mykolaiv regional governor, the charismatic Vitaliy Kim.

While Mr. Kim admitted that his life had probably been saved because he was late for work that morning, Mr. Khayitov had gone to work early and was in the building when it was hit shortly before 9 a.m. local time.

“We live not very far away from here and we heard a terrific explosion that blew open the doors in our apartment,” Tetyana said.

“I immediately called my husband. The phone rang but there was no answer. I and my daughter ran here and we saw that the part of the building on the ground floor with Stanislav’s oﬃce was completely under rubble,” she said.

Soon after they arrived, they were joined by Mr. Khayitov’s sister, Irena. The three women have spent most of the days – limited by a curfew that runs from 8 p.m. to 6 a.m. – watching as rescue services carefully remove the rubble and search for victims.

“They have only pulled out dead people, and we’ve been told there is very little chance that Stanislav could have survived. But they say that some of the floor that his oﬃce was on has collapsed into the basement below. I’m hoping that Stanislav is in a cavity under the rubble and is still alive,” Tetyana said.

Valeria, who is 15 years old and still in school, folded an arm around her mother.

“We’ve been told there isn’t much chance that my father is alive. But we pray and we hope. We will keep returning here until we find out,” Valeria said.

Stanislav’s sister said that he and his fellow workers knew that the building was a target. The administration headquarters in the eastern city of Kharkiv, another city that has been relentlessly bombarded by the besieging Russian army, was destroyed by a rocket strike in the first days of the war.

“He couldn’t stay away because he was the person that made that building function. He was in charge of the power systems, communications, heating, the security cameras around it and everything else. He knew the risk but he never contemplated staying away,” Irena, 33, said.

“We have watched only dead people being pulled out of the rubble, although everyone hopes a live person will be rescued. I hope my brother is one of them,” she said.

“Everyone who worked in that building knew the risks they were running. After the missile struck, I spoke to some of the survivors and they said they continued to come to their oﬃces because they wanted to do their part to keep the city running despite the daily attacks by the Russians. In that sense they are all heroes,” the lieutenant said.

Mr. Pletenchuk later told a journalist that the Russian artillery and rocket strikes had not caused any casualties.

Mr. Kim had become a target for the Russians because the inspiring videos he posts regularly that report what is happening in his defiant city had made him a well-known figure not only in Ukraine but beyond. Because they frequently mock Russian leader Vladimir Putin and his army, they are known to infuriate the Kremlin.

“The morning of the attack was also the start of possible ceasefire talks between Ukraine and Russia that were held that day in Turkey,” Mr. Pletenchuk said. “The Russians have made a habit of attacking civilian targets just before such talks because they seem to think it will frighten people into putting pressure on our leaders to surrender or make concessions. It has the opposite eﬀect and it only makes people more determined to destroy the Russians and drive them out.”

War in Ukraine: Volodymyr Yermolenko talks about Ukrainian identity and the Russo-Ukrainian war