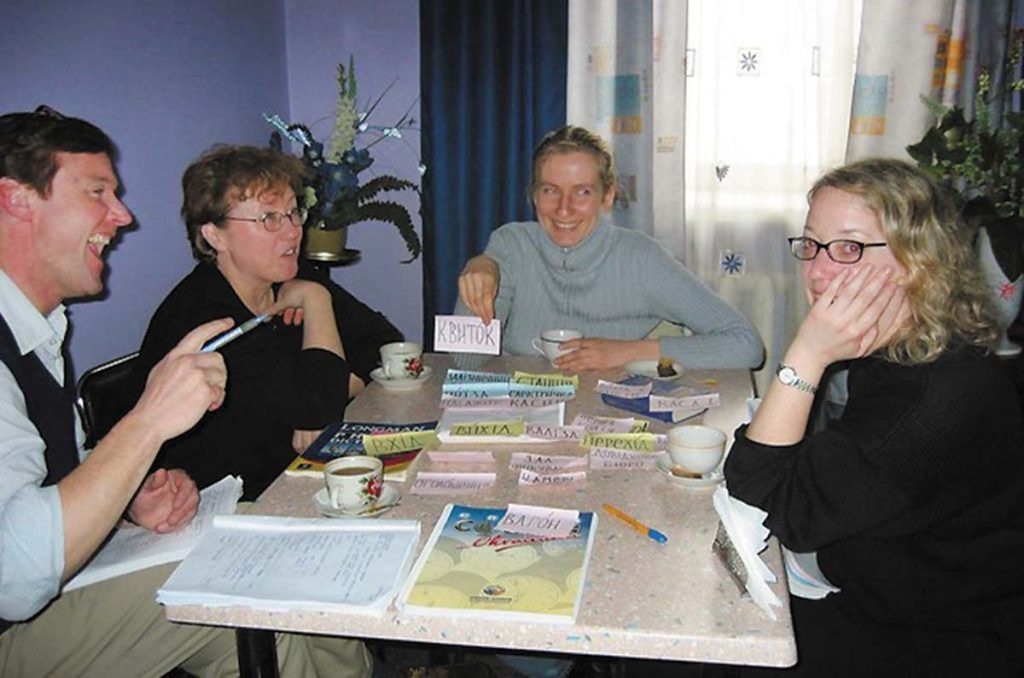 ROSLENDALE, N.Y. – The Woodstock Film Festival will return to the Rosendale Theatre in Roslendale, N.Y., on May 5 for a special fundraiser and screening of the 2021 documentary “National Museum,” directed by award-winning Ukrainian filmmaker Andrei Zagdansky.

Released in August of 2021, Mr. Zagdansky’s documentary explores the art and inner workings of one particular art institution in Kyiv. Restoration specialists, curators, art handlers, designers and, of course, visitors are fascinating characters in this unhurried, poignant and occasionally funny survey of what is cherished and revered by Ukraine, a pre-war nation of some 44 million people.

Curating, mounting and the opening of two special exhibitions – one dedicated to the Ukrainian baroque and another one to a prominent avant-garde artist, Alexander Bogomazov –are the defining events in the narrative structure of the film.

Mr. Zagdansky, a member of the European Film Academy, was born in Kyiv. He received a master’s of fine arts with distinction from Kyiv State University of Theatrical Arts.

Meira Blaustein, the co-founder and executive director of the Woodstock Film Festival, noted her own special connection to Ukraine.

“My mother was born and grew up in Chernivtsi in Ukraine, and that is where she met my father and lived with him before they made the perilous journey to Israel. My parents must be turning in their graves now over the imminent danger to their home land,” Ms. Blaustein said.

The genesis for the special fundraiser and documentary film screening came because two very close and longtime friends from Hudson Valley, N.Y., wanted to step up and do something to help Ukraine, which has fought a brutal and unjust war launched by Russia on February 24.

One of those individuals was Chris Cavanagh, a Peace Corps volunteer who lived in Lviv in 2003-2005. During her time in Ukraine, Ms. Cavanaugh became deeply involved with the culture and people there. She has maintained friendships and connections that have continued even after she left Lviv.

Ms. Cavanaugh was among a group of Ukrainian Peace Corps alumni who reconnected with one another after Russia launched its full-scale war on Ukraine on February 24.

A group soon gathered on Facebook and created Returned Peace Corps Volunteers, a group of individuals who had served in the Peace Corps in Ukraine.

The private group now has 1,348 members, though membership is restricted to former Peace Corps alumni who served in Ukraine.

That group of more than 1,300 people who served all over Ukraine have sometimes small but more often vast interconnections and networks of ex-colleagues and friends who are working to help Ukraine.

“It’s an amazing group effort on everything,” Ms. Cavanaugh said. “From the needs on the ground, … someone posting that a friend of mine in Mykolaiv and her elderly mother needed a ride out for evacuation, people stating a need and others jumping into solving it. There are hundreds, perhaps thousands of those types of stories. There’s an active approach to making things possible, from fundraising to finding specialized supplies to writing to officials.”

Ms. Cavanaugh also said the Facebook group is a place where member can share “our collective outrage and sadness.”

The institute’s stated mission is to “provide hope and healing for individuals and society through innovative educational experiences that awaken the best in the human spirit.”

She recently gave a short presentation during one of their leadership meetings at the institute after being asked to tell her colleagues a bit about the war. She chose to highlight a few of the people she knows.

It was this inspiration that led her to started another Facebook page called Hudson Valley Help for Ukraine.

“I think I have 20 followers,” Ms. Cavanaugh recalled thinking not long after she created the group. “Internet stardom here I come!”

Then, in March, Ms. Cavanaugh, who lives in Kingston, N.Y., worked with staffers at New York State Sen. Michelle Hinchey’s office to set up a donation drive to benefit Ukraine.

“We worked in partnership with the CYM [Ukrainian Youth Association] group at the Holy Trinity Ukrainian Catholic Church in Kerhonkson, NY. More than 800 items were donated,” she said.

Driven by her own initiative and tapping into her contacts, she set up an Amazon registry where she could accept hundreds of additional items that were donated for Ukraine.  She then takes those items to the church.

That same drive to help Ukraine is what pushed Ms. Blaustein, Ms. Cavanaugh’s long-time Hudsun Valley friend, to post a message on Facebook calling for “direct humanitarian aid to nearly 2,000 orphaned and displaced children in the Odesa region of Ukraine, with the goal of relieving the pain and suffering of these needy and deserving children.”

When the opportunity came up to show a film screening in support of Ukraine, Ms. Blaustein jumped on it.

“I’ve been wanting to do a fundraiser for Ukraine, so when Signe Baumane reached out, I jumped on it, especially since this film is so wonderful and the filmmaker is so great.”

Ms. Baumane is a renowned Latvian filmmaker and animator who was born in Latvia, educated in Moscow and now lives in Brooklyn, N.Y. She is a film director and has made 16 animated shorts and two feature films.

She will moderate the May 5 fundraiser and film screening, and an animated short of hers will preceding the screening of “National Museum.”

Proceeds from the fundraiser will benefit Ukrainian refugees through the charity Cash For Refugees. The charity, founded by refugees, for refugees, gives cash directly to people displaced by the war in Ukraine. It focuses on the most vulnerable victims: women with children, the elderly and the disabled.

The Woodstock Film Festival is a not-for-profit 501 (c) (3) organization that nurtures and supports emerging and established filmmakers, sharing their creative voices through an annual festival and year-round programming to promote culture, diversity, community, educational opportunities and economic growth. The festival has been hailed as one of the top regional film festivals worldwide.

Readers can purchase tickets for the film screening at https://bit.ly/3rG2zuG.  Proof of vaccination is required for entry. Doors open at 6:15 p.m., and the film screening begins at 7 p.m. A question-and-answer session will follow at 8:30 p.m. The Rosendale Theatre is a nonprofit organization that plays independent movies, art films. It also hosts live productions and concert performances.

Christina Kotlar is a writer, podcast producer and host of Film Festival reViews at filmfestivalreviews.com. She writes a blog at theunexpectedpresent.com.