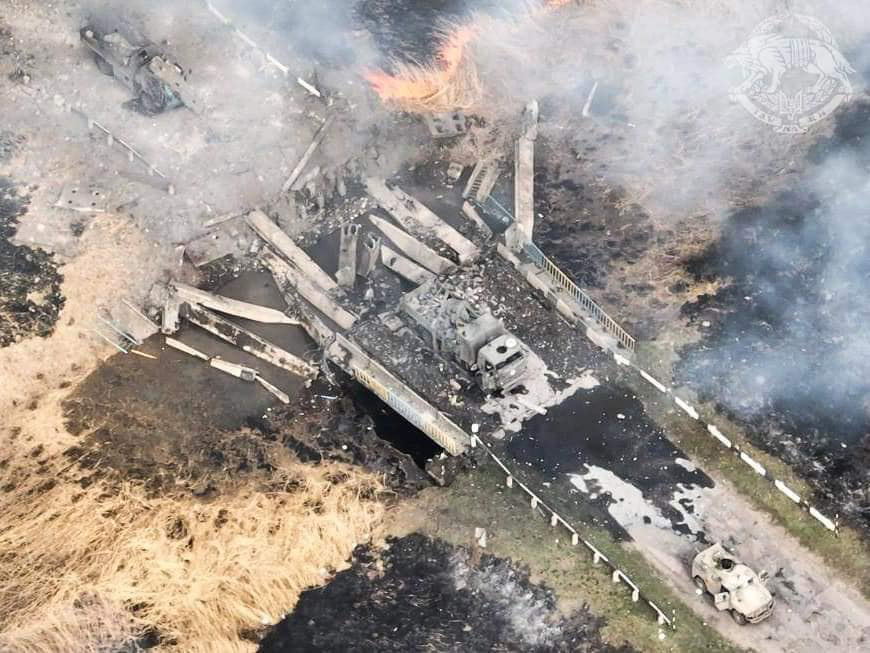 General Staff of the Armed Forces of Ukraine
Ukrainian special operation forces detonated a pontoon bridge as a Russian supply convoy was crossing the Donetsk River in eastern Kharkiv Oblast near the city of Izyum on April 14.

CHICAGO – After winning the battle for Kyiv, Ukrainian forces are preparing for a critical, if not final, chapter in Russia’s full-scale war launched on its neighboring country on February 24.

Ukrainian, U.S. and British intelligence are saying that, after Russia failed to quickly conquer the country in the span of 72 hours, Kremlin tyrant Vladimir Putin has chosen to focus on subjugating Kharkiv and the remaining area of the Donbas his forces don’t control.

To reportedly accomplish this, Putin appointed a new invasion commander – Gen. Alexander Dvornikov, who is known as the “Butcher of Syria” for his tactics of massive indiscriminate bombing of civilian targets. He commands the Russian southern military district that neighbors the Donbas, consisting of Ukraine’s contested easternmost regions of Luhansk and Donetsk.

Moscow has “concentrated tens of thousands of soldiers and a huge amount of equipment to try to strike again,” Ukrainian President Volodymyr Zelenskyy said, referring to Russian troops gathering in the eastern region of the Donbas and the southern parts of Ukraine.

About 65 Russian battalion tactical groups (BTG) are currently in Ukraine’s east and south, a senior Pentagon official told a press pool of reporters in Washington on April 14. More are being assembled from among the decimated BTGs that were routed during the battle for Kyiv.

Russia’s pre-invasion force had about 120-130 BTGs, Western intelligence had ascertained.

In addition, Ukraine’s military on the 50th day of the invasion said that Moscow is “training additional units of the Northern Fleet and the 8th All Arms Military of the Southern Military District” for the anticipated offensive in the coming weeks.

“Measures are being taken to remove [weapons]from long-term storage at bases and warehouses,” the latest Ukrainian military update said as of 6 p.m. Kyiv time on April 14.

Satellite imagery released by Western media during the week also showed an airfield east of the Donbas in Russia with more than 30 aircraft, many of which are fighter and ground attack jets poised for missions.

Overhead pictures showed a column of Russian military equipment, some towing artillery, stretching for about eight miles heading for Kharkiv in a westward direction toward the nation’s second largest city.

“I have no doubt about the cruel pain and damage that Putin can continue to inflict on Ukraine or the raw brutality with which Russian force is being applied,” U.S. Central Intelligence Agency director William Burns said on April 14.

By all accounts, Ukraine still thwarts what advances Russia makes in the south and east, but to the detriment of damage to civilians and non-military targets, such as critical infrastructure, housing, schools and hospitals.

Ukraine’s military intelligence cited alleged intercepted Russian military communication saying that Putin wants to “raze everything to the ground” in the Donbas if progress isn’t made to take over the rest of the territory by May 10, a day after Moscow celebrates Victory in Europe day in World War II.

Still, Russian forces failed to advance south of Izyum in the southeastern Kharkiv region where the Ukrainian military showed widely publicized images of a pontoon bridge being detonated as a supply convoy was crossing. That area is the gateway toward the Donetsk regional cities of Kramatorsk and Slovyansk.

Limited Ukrainian counterattacks were reported in the southern region of Kherson where 15 settlements had been liberated, said the local military administration head in the neighboring region of Dnipropetrovsk.

Local “partisans” were said to have carried out the attacks by targeting nighttime patrols using small arms and even knives.

Ukraine is still trying to breakthrough to Mariupol in that direction to reach isolated National Guard and Marine forces in the southeastern Donetsk regional city. Presidential adviser Oleksiy Arestovych said that the 36th Brigade of the marines had broken through from their enclaves to form a single unit with the Azov Regiment of the National Guard in the city.

Commanders of both units later released a joint video announcing their successful operation.

They did admit that an unidentified number of Marines surrendered while breaking through. One of them is British citizen Aiden Aslin who enlisted with the marines in 2019. Russian media showed him being interrogated by a Russian captor and there were signs of physical trauma to his face as he spoke in Russian and English.

A YouTube video surfaced on April 13 showing a Russian- and Ukrainian-speaking interrogator asking some 30 alleged Ukrainian marines about their ranks, duties and about their wounds and who treated them.

The nation had reason for its spirits to be lifted when Putin’s top confidante in Ukraine, fugitive pro-Russian lawmaker Viktor Medvedchuk was apprehended as he was allegedly trying to leave his safe house in Kyiv and escape through the Moldovan breakaway region of Transdniestria.

Wanted on treason charges, Mr. Medvedchuk had fled house arrest on February 23 on the eve of the renewed invasion. The Security Service of Ukraine (SBU) released pictures of him handcuffed and dressed in military garb while looking distraught and disheveled.

Putin is the godfather to his older daughter and Kremlin spokesman Dmitri Peskov said that, so far, the suspect is not a subject of any prisoner exchange talks.

A fourth prisoner exchange since February 24 took place this week. Five Ukrainian officers, 17 servicemen and eight civilians were released. Ukraine’s military didn’t say how many Russians were swapped during the exchange.

A fourth Russian naval vessel since the invasion began was put out of commission on April 13. In what is being described as poetical justice, Russia’s Black Sea fleet flagship, the guided-missile cruiser Moskva, was damaged.

Ukrainian officials say two anti-ship Neptune rockets struck it. Russia’s Defense Ministry only confirmed that munitions aboard the 612-foot warship had exploded due to a fire and that 500 of its crew members were evacuated. The Pentagon confirmed a “huge explosion” had occurred aboard the ship, but it wouldn’t say what caused it. Moscow said it was being towed back to Crimea from the Black Sea.

Moskva is the same vessel that a Ukrainian coast guard member swore at while standing on the Black Sea Snake Island after he and other servicemen were offered a surrender.

U.S. President Joe Biden described Russia’s conduct of war in Ukraine as “genocide” for the first time while visiting Iowa during a rural infrastructure development tour of the country this week.

Before boarding Air Force One, he said it is “genocide because it’s become clearer and clearer that Putin is just trying to wipe out the idea of even being Ukrainian,” Reuters reported.

The Verkhovna Rada also on April 14 voted overwhelmingly to designate the actions of the Russian state toward Ukraine as an act of genocide.

Children separated from their families or deceased parents are being deported to Russia and orphans are being put up for adoption. Russian Senator Lilia Gumerova said on April 13 that it was a “shame” that Ukrainian children from “the liberated territories” don’t speak fluent Russian.

“Separating children from their parents, deporting them and stripping them of their culture is genocide as defined by Article II Section E of the 1948 Genocide Convention,” he tweeted.

A report by the Organization for Security and Cooperation in Europe (OSCE) found “patterns of violent acts violating international human rights law (IHRL)” committed by Russian troops in Ukraine.

Compiled by three professors of international law, the report said that 500,000 Ukrainians have been forcibly deported to Russia from occupied areas. It furthermore said that Russia has “committed war crimes and crimes against humanity.”

Meanwhile, the International Criminal Court’s (ICC) chief prosecutor, Karim Khan, declared Ukraine a “crime scene” and said there are “reasonable grounds” to believe that war crimes have been committed in the country after visiting the northwestern Kyiv suburb of Bucha.

More than 400 civilian bodies have been exhumed there since Russia retreated on April 1. Local officials say many corpses have gunshot wounds to the head and at least 25 female bodies show signs of sexual violence.

Similar scenes were discovered in the Kyiv regional town of Borodyanka and Irpin, as well as in settlements in Sumy and Chernihiv.

Three-hundred people were taken hostage on March 4-31 in the basement of a school in the village of Yahidne in Chernihiv Oblast. The captives kept track of the days on a wall and wrote down the names of the 18 people who were killed. They wrote March 31 when “our [soldiers]came” to liberate us, authorities said.

The Ukrainian Foreign Affairs Ministry has created an archive to record all of the alleged Russian war crimes.  That archive can be found at https://war.ukraine.ua/russia-war-crimes/.

Mr. Zelenskyy pleaded for more heavy weaponry to beat back the Russian invasion and his U.S. counterpart partly answered the call with $800 million worth of additional military aid.

Mr. Biden said the package will offer Ukraine “new capabilities” as Russia recalibrates for an offensive in the east. It’s part of a $2.6 billion package of aid the White House has approved since February 24.

The distribution of “weapons, ammunition and other security assistance” was to allow Ukraine to defend itself “as Russia prepares to intensify its attack in the Donbas region,” Mr. Biden said.

Some of the new weapons are “tailored to the wider assault we expect Russia to launch in eastern Ukraine,” he added, the Kyiv Post reported.

Mr. Zelenskyy and his diplomats have called for a full ban on Russian energy resources, such as coal, natural gas and oil, which add billions of dollars to Moscow’s coffers each month.

He also asked for all willing countries to ban their ports to Russian vessels.

The State Border Service said 870,000 Ukrainian refugees have already returned to the country, with over 3 million remaining abroad.

Kyiv Mayor Vitali Klitschko said two-thirds of the city’s residents who had left the capital after Russia invaded have returned.

However, it is too early for people who left their homes in Kyiv and the surrounding areas to return, Deputy Defense Minister Hanna Malyar said.

“It is too early to return, even to Kyiv,” she said on April 12, as cited by Radio Free Europe/Radio Liberty.

Kyiv regional Governor Oleksandr Pavlyuk suggested that the end of May was a more realistic time for the safe return of displaced people or refugees.

This week, the embassies of the European Union, Slovenia, Turkey, Latvia, Lithuania and Estonia returned to their base of diplomatic missions in Kyiv.