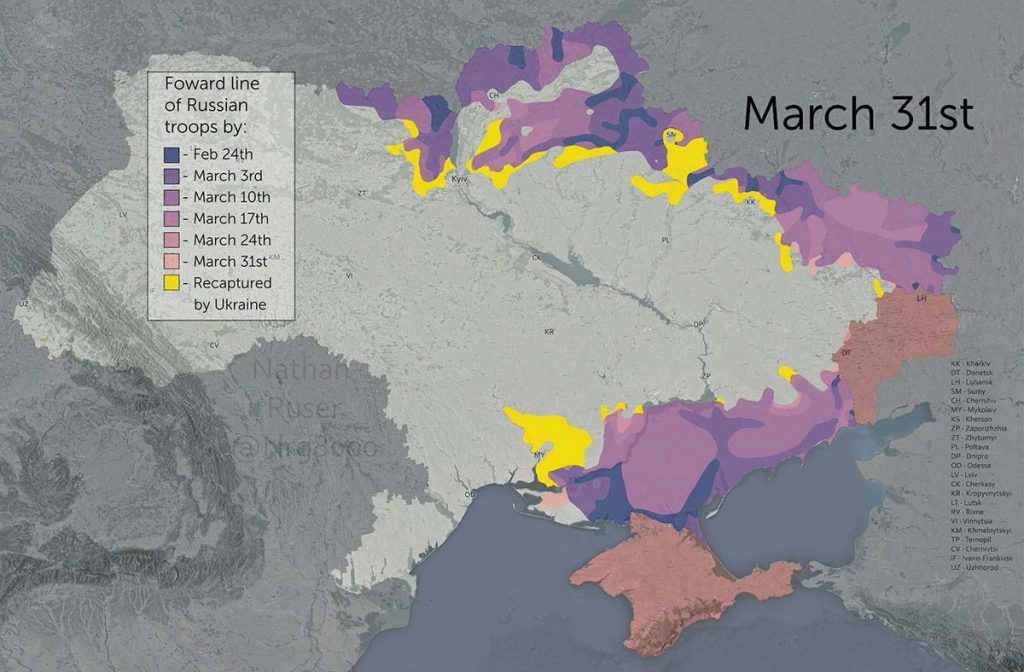 Courtesy of Nathan Ruser
A map of Ukraine shows the areas of the country that have been recaptured by Ukrainian forces since Russia renewed its invasion on February 24.

CHICAGO – Ukrainian forces have definitively crushed Kremlin dictator Vladimir Putin’s objective of regime change and rapidly taking over the country, including its brain center of Kyiv, as Russia’s renewed invasion of the country enters a second stage that purportedly is focusing now on seizing the remainder of the Donbas.

As the unprovoked war enters its second month, Kyiv has inflicted heavy losses on the invading forces and stalled their advance by outsmarting and willfully pouncing upon the Russian military.

As of the 36th day of the all-out war, bridges have been destroyed around the surrounding Kyiv suburbs, and columns of Russians forces were picked apart on the ground with anti-armor weapons, well-coordinated artillery and drone attacks to disrupt supply lines. The Ukrainian forces have also skillfully used guerilla-style tactics.

By March 29, Ukrainian and Russian delegations again met face-to-face for talks, the first in more than two weeks, hosted by NATO-country Turkey.

Meeting again without a declared ceasefire, a deputy Russian Defense Minister pledged afterward that Russia would “suspend” military activity in the vicinity of Kyiv.

Still, aerial bombardment intensified on Chernihiv to the north afterward causing injury to 25 civilians the following day in what the regional capital Mayor Vladyslav Atroshenko said was a “colossal attack.”

Entire predominantly Russian-speaking cities, towns and villages have been reduced to rubble, such as Mariupol, Kharkiv and Izyum.

Kyiv, London and Washington were skeptical of Russia’s promises to halt combat operations, although pockets of Russian forces were reported to be repositioning from the Kyiv area, including as far north as Chornobyl and Slavutych, but its remaining forces appeared to be digging in.

“Russian forces continue to hold positions to the east and west of Kyiv despite the withdrawal of a limited number of units,” the British Defense Ministry stated. “Heavy fighting will likely take place in the suburbs of the city in the coming days.”

“We’ll see. I won’t predict anything until I see what Russia’s actions are,” he said when asked to comment on the negotiations. “We will find out what Russia is planning on doing, but in the meantime, we will continue to maintain strong sanctions, continue to provide Ukraine with the means to defend itself and continue to closely monitor what is happening.”

Ukrainian President Volodymyr Zelensk­yy also said at a midnight address to the nation on March 31 that the country he leads isn’t naïve.

He held an hour-long conversation with his U.S. counterpart the past week asking for more weapons, stricter sanctions against Russia and more financial assistance.

“Ukrainians are not naïve. … Of course, we see all the risks. Of course, we don’t have a reason to trust the words of representatives of a country that wages war against us.”

Kyiv on March 31 reported having killed about 17,500 invading Russian personnel, destroying from a quarter to a third of Russia’s pre-invasion materiel.

Earlier this month, Mr. Zelenskyy called Russia’s military “incompetent” while saying Russia had “sent its people to slaughter” and that the invading country is experiencing “unprecedented losses.”

His remarks coincided with what a British spy chief said about low morale and discontent among Russian troops.

Jeremy Fleming, head of British intelligence, said Russian troops are “refusing to carry out orders, sabotaging their own equipment and even accidentally shooting down their own aircraft.”

According to reporting by Sky News and the Financial Times, he added: “Even though we believe Putin’s advisers are afraid to tell him the truth, what’s going on and the extent of these misjudgments must be crystal clear to the regime.”

“The fact that he [Putin] may not have all the context, that he may not fully understand the degree to which his forces are failing in Ukraine, that’s a little discomforting,” Mr. Kirby said.

An objective Russia has already achieved is to establish a land bridge to occupied Crimea by seizing the southern areas from the Rostov-on-Don region at its border into Ukraine through Mariupol, Melitopol and Kherson. It also seized control of a dam that could renew the supply of water to Crimea from Kakhovka in the Kherson region that was occupied. Ukrainian forces still could sabotage that effort by bombing the area.

U.S. and British intelligence also say that the besieged Azov port city of Mariupol is still held by Ukraine, but Russian forces are within the city center.

Also in the south, another port city, Mykolaiv, has successfully repelled attacks, but Russia is still within range of being able to indiscriminately bombard the city. On March 29, a Russian projectile struck the regional capital’s administrative building, killing at least 20 people, the State Emergency Service said.

Nearby in Kryvi Rih in the Dnipropet­rovsk region, the city’s mayor Oleksandr Vilkul said Ukrainian forces had pushed back Russian forces by 40-60 kilometers.

That area is key if Ukraine aims to stop Russian ground forces from advancing on Odesa, the Black Sea port city that still faces the threat of a potential naval assault.

In the east, Ukraine’s military is reporting that Russian forces are trying to bypass Izyum, a city on the eastern edge of the Kharkiv region, to eventually attack the symbolic cities Kramatorsk and Slovyansk in Donetsk Oblast. Ukraine liberated them in 2014 in a counter-offensive when Russia first invaded the country after capturing Crimea.

About a quarter of Ukraine’s pre-invasion population has been displaced with more than 4 million people fleeing the country, according to the United Nations. At least 145 children have been killed and 222 wounded.

U.N. Human Rights chief Michelle Bachelet said on March 30 that Russia may have committed “war crimes,” adding that Ukraine is “enduring a living nightmare” due to the bombardment of civilian targets.

Mariupol Mayor Vadym Boychenko told Radio Free Europe/Radio Liberty that 40 percent of the Donetsk region’s second largest city is now uninhabitable and that some 5,000 residents have been killed.

In an interview with London-based The Economist magazine, the Ukrainian president said that civil servants, including mayors, in occupied towns and cities have been kidnapped and even killed.

Mounting accounts of Russians raping women are also surfacing. Ukrainian Prosecutor General Iryna Venediktova on Facebook has said that reports are being filed of sexual violence toward women by Russians.

The Times of London published a personal account of a woman in the Kyiv region on March 28 saying she was raped by two Russian soldiers as her toddler wept in a nearby boiler room.

The U.S. and Britain imposed additional sanctions designed to deter Russia’s behavior on March 31. Previous sanctions by them, the European Union, Japan, Australia, Canada and Japan have begun to cripple Russia’s economy and reduce its ability to access its war chest.

The U.S. Treasury department said it closed additional sanction-evasive “networks” that were run by 21 entities and 13 individuals in the technology sector, some of which were described as “cyber actors.”

Meanwhile, Britain announced it was sanctioning the so-called Butcher of Mariupol, Russian Col. Gen. Mikhail Mizintsev, who is leading the assault on the embattled city.

“#Putin’s war on #Ukraine is based on a torrent of lies,” tweeted British Foreign Affairs Secretary Liz Truss. “We will keep on going w/more sanctions to ramp up the pressure on Russia & ensure Putin loses in Ukraine. Nothing & no one is off the table.”