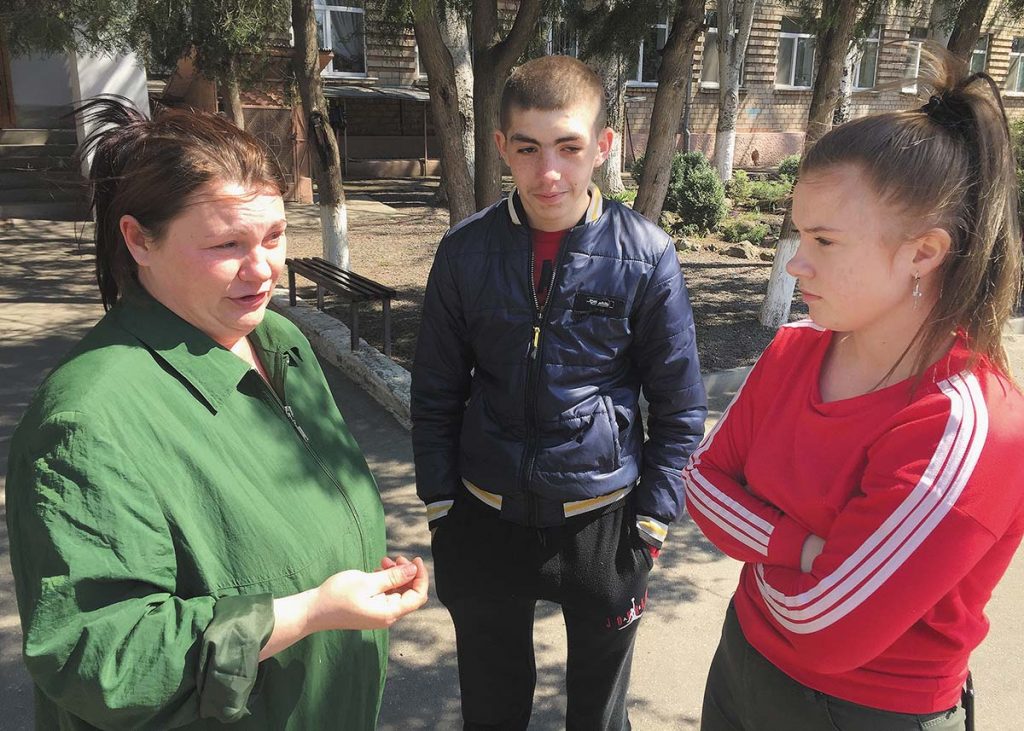 Askold Krushelnycky
Kateryna Pypsha (left) speaks in front of a school in Mykolaiv on April 5 about the devastation caused by the Russian military to her home village as two of her six children listen.

MYKOLAIV, Ukraine – Kateryna Pypsha’s words faltered and she started to cry as she heard the news on April 5 that her village was close to falling into Russian hands.

“We’ve all seen the murders and rapes the Russians have been doing in the places they occupy,” Ms. Pypsha said. “We are terrified for our relatives and friends who are still there.”

She has been in contact via telephone with her 85-year-old mother-in-law who was too frail to be evacuated.

“She told me there is destruction with burning buildings everywhere. Where the Russians have entered neighboring villages, they immediately start breaking into homes and looting everything,” she said.

Ms. Pypsha spoke from a school in Ukraine’s port city of Mykolaiv, which is now being used to house some 160 refugees from the surrounding area who have been driven from their homes by the fighting.

She arrived with her husband and six children from Olekhandrivka, some 55 miles north of Mykolaiv, on March 24 in a column of buses driven by volunteers who risked their lives to rescue the refugees under heavy Russian artillery and sniper fire.

Ms. Pypsha said Russian forces began their onslaught on Olekhandrivka, which has been defended by a small detachment of Ukrainian soldiers augmented by territorial defense units, on March 14.

“There was no warning and they used tanks and artillery to shell the village. Our home is on the edge of the fields they were in and it was being hit by shrapnel and bullets from the start,” Ms. Pypsha said. “After a day, we moved further into the center to stay with relatives because it was too dangerous.”

But the Russians continued their unrelenting attack.

“It was like they were trying to wipe our village oﬀ the face of the earth,” she said. “There were many dead and injured. We knew we had to get out.”

They were brought to one of the makeshift refugee centers that Mykolaiv, itself under Russian assault, has organized to look after thousands of people who have fled their homes in the region since it came under attack the first day that Russia launched its unprovoked and premeditated full-scale war on Ukraine on February 24.

The building housing them is a school that previously catered to 600 pupils with heart conditions from the region. The pupils, ages 6 to 18, stayed and received medical treatment.

“The city government and ordinary people have been extremely generous in helping out,” Ms. Makarova said. “Some of the refugees arrived with only the clothes they were wearing and we have received donations of clothing and shoes to provide for everyone staying here or who have passed through on their way to towns further west in Ukraine.”

Since the weekend of April 2-3, Mykolaiv has experienced an increase in Russian shelling and missile attacks, including from Russian cluster munitions, which scatter from a height some 52 bomblets, necessarily indiscriminately.

On April 4, three salvoes of cluster munitions were fired at diﬀerent times during the day. They killed at least 10 people, including a child, and injured around 60 others.

Ms. Makarova said some of those munitions fell not far from the school.

“Imagine how people who thought they had escaped from a nightmare found themselves back in the horror,” she said. “Nobody has asked to leave, but everyone is worried for their children.”

On April 4, businessman Viktor Drobot, dressed in a territorial defense uniform and shouldering a short-barreled version of a Kalashnikov machine gun, drove a van and trailer full of food supplies he had bought himself to the refugee center.

Mr. Drobot is one of a huge number of Ukrainians who have dedicated themselves to helping their country fight against the Russians in any way they can. In March, he opened the doors of his Astoria Hotel to refugees from the neighboring region of Kherson when it was overrun by Russian forces.

Some of the refugees used his hotel as a staging point along their journey to western Ukraine, which is regarded as a relatively safe area.

But some 35 people – men and women – have stayed to help other refugees or they have signed up with the territorial defense forces.

Mr. Drobot and his daughter have a large, modern dental clinic that now provides free services to anyone who needs them. He also runs the city’s largest architectural and construction design company that now helps to defend Mykolaiv in various ways.

The Russian military needs the port city as a gateway for an attack on Ukraine’s largest and most important Black Sea port, Odesa, some 80 miles to the west.

A large battle has raged to the south, east and north of Mykolaiv for a week as Russian tanks and other armor have tried to punch through Ukrainian defenses.

Ukrainian military and city authorities told this correspondent that they expect Russian forces to make a concerted attack on the city in order to take Mykolaiv by mid- to late-April.

They attribute the increased artillery and missile attacks to Russian eﬀorts to break the will of Mykolaiv’s inhabitants to continue to resist the Russian army.

“Everyone needs to help in any way they can, and so many people have been doing that,” Mr. Drobot said. “The regular and territorial forces defending the city are heroes, but I also think that everyone who has remained here is a hero.”

Natalia and Mykola Pron and their five children, aged between 10 and 22, arrived last week from their village of Nova Hryhorivka. The village has been pummeled by Russian forces for weeks.

“Until the war started, we didn’t believe anything would happen. What did we do that Russia attacked us? Why are they killing us? They said they were coming to liberate us,” Ms. Pron said. “Everything was fine before they came. We don’t need liberation. Let them free themselves from the monsters who control them!”