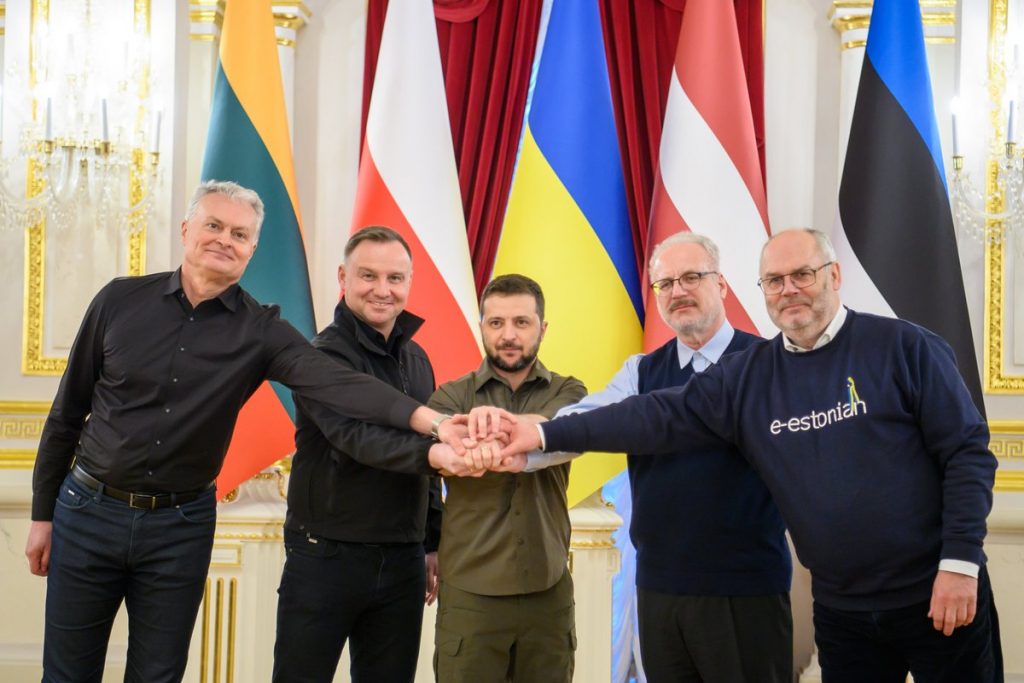 @GitanasNauseda via Twitter
Ukrainian President Volodymyr Zelenskyy was visited in Kyiv on April 13 by the presidents of (from left to right) Gitanas Nauseda of Lithuania, Andrzej Duda of Poland, Egils Levits of Latvia and Alar Karis of Estonia.

The presidents of Poland and all three Baltic states visited the town of Borodyanka, northwest of Kyiv, on April 13 in a show of support for Ukraine.

Lithuanian President Gitanas Nauseda said the town was “permeated with pain and suffering” after civilians were murdered and tortured there and residential homes and other civilian infrastructure were bombed.

“It is hard to believe that such war atrocities could be perpetrated in 21st-century Europe, but that is the reality. This is a war we must win,” Mr. Nauseda said in a statement.

“We will continue advocating for Ukraine’s membership in the European Union & helping this heroic nation overcome the horrors of war,” Mr. Nauseda said on Twitter. “Unity is our strength. We will stand with #Ukraine until victory.”

Poland announced earlier that Mr. Nauseda and his fellow heads of state – Polish President Andrzej Duda, Estonia’s Alar Karis and Latvia’s Egils Levits – met in the Polish city of Rzeszow near the Ukraine border before boarding a train for Kyiv.

The goal is to show support to Mr. Zelenskyy “and the defenders of Ukraine in a decisive moment for this country,” Polish presidential adviser Jakub Kumoch said in a statement.

The visits of the leaders of Poland, Lithuania, Latvia and Estonia come a day after Russian President Vladimir Putin vowed to continue his bloody offensive.

All four countries worry they may face Russian attack in the future if Ukraine falls.

Ukraine on April 12 rejected a visit from the leader of another NATO country. German President Frank-Walter Steinmeier said he had planned to go on to Ukraine but was turned down.

“I was prepared to do this, but apparently, and I must take note of this, this was not wanted in Kyiv,” he told reporters.

Mr. Steinmeier, a former foreign affairs minister, is facing criticism for his detente policy toward Moscow, which he has since admitted was a mistake.

(With reporting by AFP and Reuters)