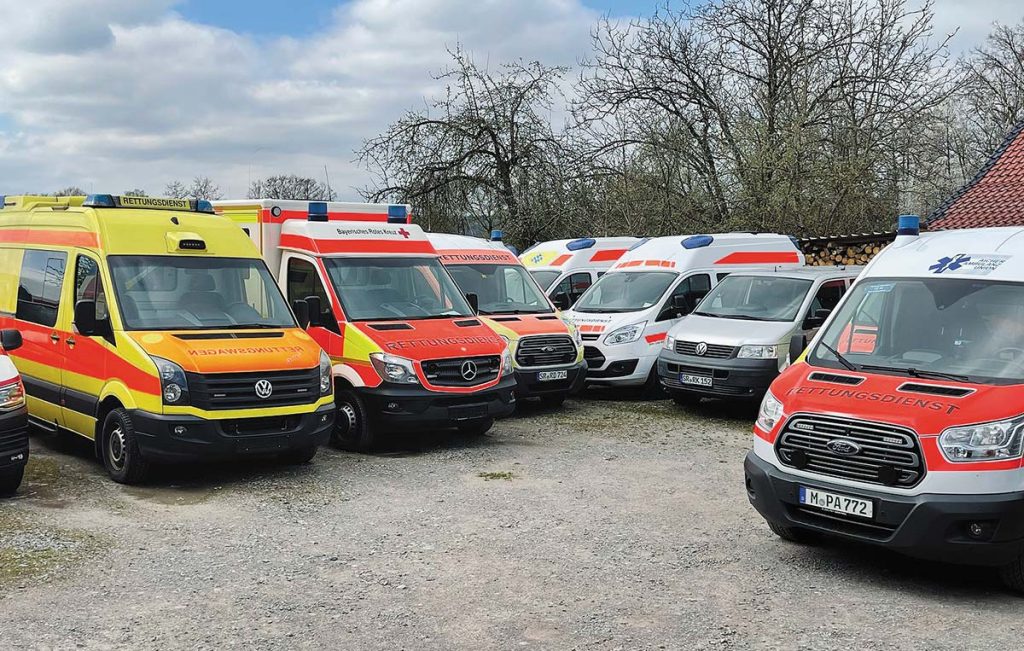 Deacon Andrii Sydor
The Ukrainian Orthodox Church of the U.S.A. delivered ambulances and minivans to Ukraine.

SOMERSET, N.J. – The Ukrainian Orthodox Church of the U.S.A. (UOC-U.S.A.) has delivered humanitarian aid to refugees and to those who remain in war-torn Ukraine. As the full-scale war launched by Russia against Ukraine on February 24 passed its 50th day, the world has witnessed atrocities being committed in Ukraine that many have called genocide.

Archbishop Daniel, ruling hierarch of the Western Eparchy of the Ukrainian Ortho­dox Church of the U.S.A. and Diaspora, traveled to Germany to first-hand minister to the needs of the refugees who gathered there. The archbishop listened to heart-wrenching recollections of refugees and victims of the war, mourned with them at the loss of their loved ones, prayed with them, cried with them, delivered much needed humanitarian aid to them. He also passed along financial assistance that was to be delivered to people sheltering in place in the far east of the war-ravaged country.

In addition to the humanitarian aid that has been delivered by the UOC-U.S.A., the Church has sponsored seven ambulances, two of which are already in use saving lives in Ukraine. The UOC-U.S.A. also purchased three medium-load minivans to distribute the most necessary medical and charitable aid throughout regions in Ukraine. Those minivans will be able to access locations that heavy trucks cannot reach. Large trucks struggle to navigate severely damaged roads, many of which also still have land mines that were placed there by the retreating Russian military.

Groups of young volunteers (supported by donations from the UOC-U.S.A.) have purchased and hand-delivered thousands of packages of necessities to embattled people throughout Ukraine, among them the elderly, children and those who are living in damaged homes or cellars underground in the Kharkiv, Dnipro and Mykolaiv regions of the country.

The UOC-U.S.A., with the blessing of Metropolitan Epifaniy of the Orthodox Church of Ukraine (OCU), is working with Metropolitan Serhiy of the Donetsk Eparchy of the OCU to deliver much-needed aid and support for refugees who are fleeing what remains of the once-thriving metropolis of Mariupol.

Generous donations by the faithful of the UOC-U.S.A. have allowed the OCU to provide stipends of between $300-$1,000, depending on the size of the family unit and the need of the particular individuals, to Ukrainians who have lost their homes, possessions and loved ones as a result of Russia’s brutal, unprovoked war on Ukraine.

The Saint Andrew Society, a charitable organization of the UOC-U.S.A., led by Protodeacon Ihor Mahlay, donated $5,000 during the week of April 10-17 to assist Ukrainian refugees in need in Germany.

Archbishop Daniel continues to support the efforts of the Ukrainian military and refugee camp chaplains. Most recently, various liturgical items were purchased and delivered to various locations in order to provide the medical and military chaplains with the most necessary items to help them fulfill their mission of serving the spiritual needs of those entrusted to their spiritual care.

The UOC-U.S.A.’s goal is to get financial contributions into the hands of those who urgently need support. Readers who would like to support this work can do so via the following secure online donation link: www.paypal.com/donate/?hosted_button_id=J6H8WN2ZJSY54.

The Church underscores that this appeal is not motivated by any political point of view, but rather it is motivated out of its stated concern for the dignity and sanctity of human life. For additional information, readers may visit the UOC-U.S.A. website, www.uocofusa.org.