World learns the horrors of Bucha, as Ukraine decimates Russian forces in and around Kyiv

Theater of war shifts toward Donbas while Russia re-groups to consolidate southern Ukraine
By Mark Raczkiewycz8 Mins ReadUpdated:April 08, 2022 9:26 am 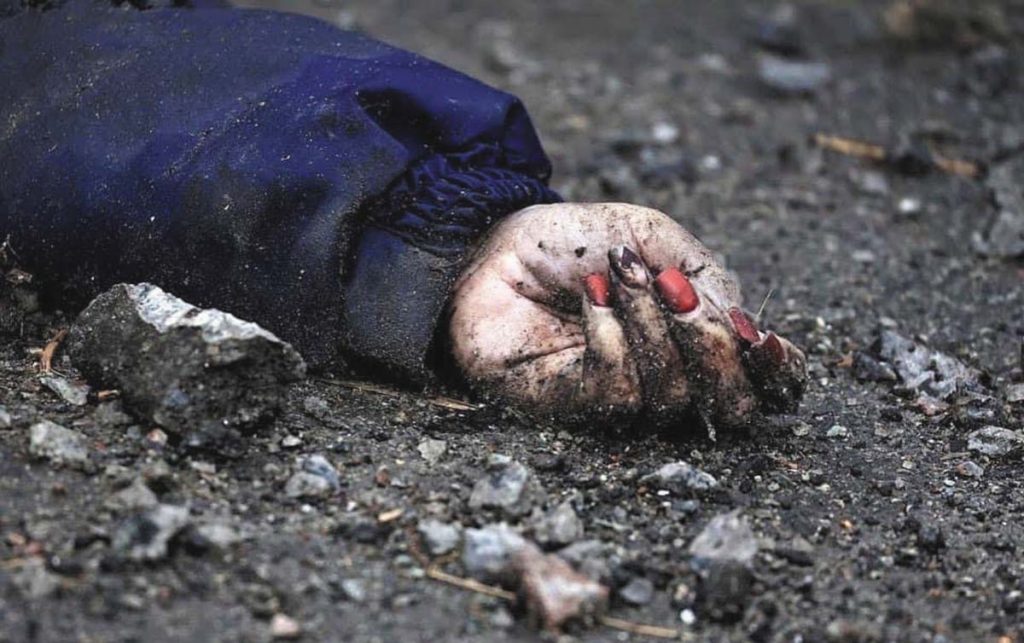 Courtesy of Volodymyr Groysman
A nail-polished hand of a deceased civilian woman in Bucha, a suburb of Ukraine’s capital of Kyiv.

CHICAGO – After Ukrainian forces decimated Russian forces in the vicinity of Ukraine’s capital of Kyiv and the surrounding northern regions, Russian forces retreated to Belarus to regroup for an onslaught on the Donbas region in the easternmost part of the country.

In their wake, the withdrawing Russian forces left behind evidence of what is being described as war crimes and even genocide discovered in the liberated suburbs northwest of Kyiv in Bucha, Irpin and Boro­dyanka.

Western intelligence reported over the past week that most of Moscow’s forces trying to capture Kyiv, a city of almost 3 million, were rendered incapable of combat and so Russia decided to focus the remainder of its strength on the remaining areas of the easternmost regions of Luhansk and Donetsk where Kremlin despot Vladimir Putin has waged a war upon the neighboring country since 2014.

Russian atrocities included the execution of hundreds of civilians whose bodies were subsequently left behind in Bucha, a suburb northwestern of Kyiv. The city’s mayor, Anatoliy Fedoruk, said that 90 percent of civilians who died had “bullet wounds, … not shrapnel wounds,” a Deutsche Welle news team reported.

Ukraine’s chief prosecutor, Iryna Vene­diktova, said the most victims from Russian killings were discovered in nearby Borodyanka, though she did not provide a death toll. At least 200 civilians are feared dead and lying under the rubble of destroyed buildings, the city’s manager said.

Olha Sukhenko, the township head of Motyzhyn in the same region, was found killed and her body laid in a pit together with her family, including her son, whose head was decapitated.

U.S. President Joe Biden called the killings “war crimes,” while others have called the acts genocide as evidence mounts that invading Russian forces are specifically targeting civilians and non-military infrastructure, and they are killing livestock and disrupting farming operations.

It has been described as the most-watched war in real-time. And, writing in a commentary for The Washington Post, John Hopkins University Associate Prof. Eugene Finkel called what’s happening in Ukraine “genocide.”

Ukraine’s military is now bracing for what its military intelligence says Putin desires. Namely, to conquer the entire Donbas, consisting of the Donetsk and Luhansk regions before May 9. On that day, Russia historically commemorates the Soviet Union’s victory in Europe over Nazi Germany in World War II despite in 1939 having started the war by invading Poland, whose territory constituted areas of modern-day Ukraine and Belarus.

The three eastern regional administration heads of Kharkiv, Luhansk and Donetsk have called on civilians to leave the area in anticipation of Russia’s next move.

He also mentioned that not one hospital in the region he governs has been left unscathed by Russian projectiles, with each one having suffered damage.

The southeastern Kharkiv regional town of Izyum is still contested. But Popasna has ever since 2014, following Russia’s initial invasion, been divided between Ukrainian and Russian forces.

Western intelligence officials, including from the Pentagon and Britain, say that Ukraine is shifting forces toward the east to resist Moscow’s objective of taking over the rest of the eastern regions.

NATO chief Jens Stoltenberg said over the past week that Russia’s war could last for years and that Putin still wants the “whole of Ukraine.”

He added that “Putin can end it [the war]immediately if he withdraws his troops and stops attacks on an independent sovereign Ukraine, and seeks a political solution at the negotiating table. But, at the same time, we must be realistic and understand that this may take a long time, months, or even years.”

Ukrainian forces have valiantly fought off the Russian military, which is more superior in number, and it has inflicted heavy casualties that Moscow has not acknowledged.

Kyiv says that Russia has lost more than 600 tanks and 18,000 military personnel.

The heroic, and to some surprising, ability of Ukraine’s military to resist the Russian onslaught has been attributed to eight years of training with Western military personnel. It has also been attributed to the weaponry Ukraine has received from abroad to keep Russia at bay.

U.S. General Mike Milley announced that 60,000 additional anti-armor weapons are being delivered to the war-torn country. And U.S. Secretary of State Antony Blinken said the country will have 10 anti-tank weapons to every one Russian armor unit.

Unconfirmed reports say that British anti-vessel Harpoon rockets have been delivered to the southern Black Sea port city of Odesa and the United Kingdom’s NLAW anti-armor killers are already being used by Ukraine’s military.

The Czech Republic is confirmed to be sending weapons, including tanks, while the U.S., according to The New York Times, is sending so-called suicide drones. It is also training Ukrainian personnel on how to use them.

Donetsk’s second-largest city of Mariupol is still besieged and Ukrainian forces hold central areas of the city, but they are divided into three different sectors.

Speaking to the Greek parliament on April 7, Mr. Zelenskyy said the “city is almost destroyed.”

“It was a city with a population of half a million people, and there are still about 100,000 people left there. But there is virtually no undamaged building. Almost all buildings in the city have been completely destroyed,” he said.

The city is deprived of water, natural gas and electrical power supplies and essential goods.

Military experts write that the seizure of the city is symbolic for Putin because the Russian ruler wants to establish a land corridor between mainland Russia and occupied Crimea that Moscow forces seized in 2014.

In what is now an increasingly dire situation, Ukrainian National Guard units from the Azov Battalion and Marines still defend pockets of the city.

Presidential adviser Oleksiy Arestovych said on Twitter that the country’s forces still provide them with “direct and indirect support,” including helicopters which “successfully delivered ammo [ammunition].”

This week, the U.S., Britain, the European Union, in coordination with the Group of Seven (G-7) industrialized countries imposed additional restrictive measures on Russia following the atrocities discovered in Kyiv’s northwestern suburbs.

Affected financial institutions include Russia’s biggest lender, state-owned Sberbank, which holds a third of the country’s banking assets, and Alfa Bank, which is the fourth largest bank.

The European Union released a fresh set of sanctions since February 24 when the renewed invasion started.

“Further targeted export bans worth 10 billion euros [will occur]in areas in which Russia is vulnerable: this includes, for example, quantum computers and advanced semiconductors, but also sensitive machinery and transportation equipment,” she said, as cited by Interfax news agency.