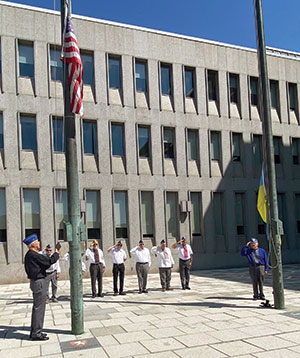 BETHLEHEM, Pa. – The Ukrainian American community in the Lehigh Valley, Pa., commemorated Ukrainian Independence Day on August 24 at Bethlehem City Hall Plaza. A crowd of about 100 attended the flag raising ceremony and accompanying program. The event was both celebratory and solemn as government officials and keynote speaker Dr. Olena Ogrokhina spoke of the war in Ukraine and the need for continued support. The artistic program focused on Ukraine’s rich cultural heritage and highlighted song, dance and verse. Members of Ukrainian American Veterans (UAV) Post 42 of the Lehigh Valley raised the American and Ukrainian flags. The Ukrainian National Women’s League of America (UNWLA) Branch 91 of the Lehigh Valley sponsored the event.