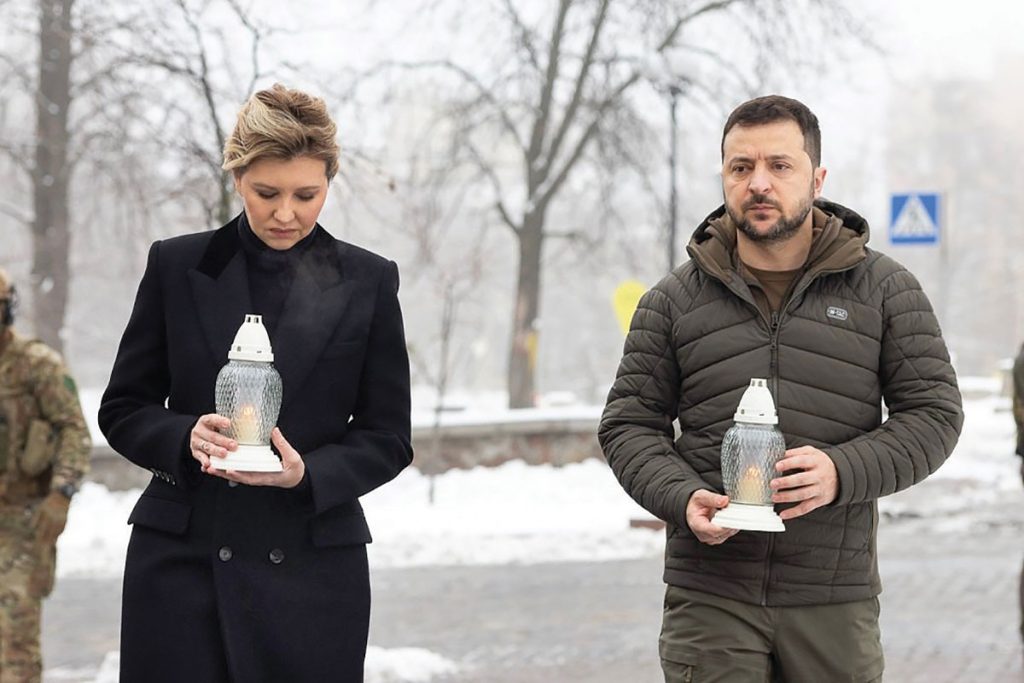 Office of the President of Ukraine

LVIV – Despite the ongoing Russian war, Ukrainians throughout the country marked the eighth Day of Dignity and Freedom on November 21, a holiday inaugurated in 2014 to celebrate the start of two modern Ukrainian revolutions – the Orange Revo­lution of 2004-2005 and the Revolution of Dignity of 2013-2014.

“Today, we celebrate the Day of Dignity and Freedom. A holiday that shows that for us dignity and freedom are the most important. It is the answer to the question of who Ukrainians are and what is most important to them,” Ukrainian President Volodymyr Zelenskyy said in a video address to mark the occasion.

That video included portions of Mr. Zelenskyy’s address on the same occasion from 2021. By splicing together fragments from the president’s speech last year, viewers could quickly see how the president has changed in a year. Last year he wore a suit; this year he was dressed in a military khaki t-shirt.

Perhaps most noticeable is the president’s face, which now looks tired and haggard as a result of leading his country through nine months of war against what many experts initially believed was a far superior military foe.
“I said these words in the same place on the same day exactly one year ago. What has changed since then? A lot in our country, Europe and the whole world. But something remains unchanged. The answer to the question of who Ukrainians are and what is most important to us. Two values, inextricably intertwined, like the right and left banks of the Dnipro River. Like blue and yellow colors. This is dignity and freedom,” Mr. Zelenskyy said.

“We always remember this and have no right to forget. We have always valued this and are not afraid to defend this. We always knew what we wanted. And this year, everyone found out what we are capable of. Friends and enemies saw it, allies and partners. We saw for ourselves – some once again, some for the first time – but all together we proved and continue to prove that dignity and freedom are most important for us. This remained unchanged. And everyone saw what Ukrainians are capable of,” Mr. Zelenskyy said.

On the Day of Dignity and Freedom, Mr. Zelenskyy and his wife, Olena, honored the memory of the activists who perished during the Revolution of Dignity. The couple placed icon lamps near the cross on the Alley of Heroes of the Heavenly Hundred in Kyiv.

“The celebration of the Day of Dignity and Freedom, the 9th anniversary of the Revolution of Dignity, takes place, unfortunately, in conditions of war. The current war is a new Maidan, but it is occuring within the borders of the entire country,” said Ihor Poshivaylo, director of the Museum of Revolution of Dignity.

“This year’s celebration is taking place in conditions of large-scale aggression. Still, the program is quite concise and considers new realities, air raid sirens, and the fact that many of the Revolution’s participants are today at the front. The key thesis of this year’s campaign is that the Revolution of Dignity was the first victorious battle of this war,” Mr. Poshivaylo said.

Ukrainians in Kherson also celebrated the Day of Dignity and Freedom, which this year included the slogan, “We were victorious on the Maidan; we will win the war.”

After more than eight months of Russian occupation, residents of the now liberated city are rethinking the concept of freedom.

They gathered on the central square – Freedom Square – to lay flowers, pay respect to their fallen heroes and once again thank the soldiers who liberated their city.

The square became a symbol of Kherson’s resistance. People gathered there to protest against the Russian occupation when Moscow’s forces took control of the city. When Ukraine recapture the city, its residents gathered in Freedom Square to meet members of the Ukrainian Armed Forces and celebrate their freedom.

On November 21, all fallen fighters for the freedom of Ukraine were honored with a joint prayer in Lviv at the Lychakiv cemetery. City officials and members of the public solemnly laid flowers and lit lamps on the graves of those who died fighting for Ukraine’s freedom. Afterward, there was a joint prayer for Ukraine and its defenders.
Also in Lviv, city officials held an event, “Reminiscences of the Maidan,” during which time the artist Shumei performed songs in Lviv and beyond on the piano.

Ukrainian Prime Minister Denys Shmyhal said that dignity and freedom are written into the genetic code of Ukrainians.

“For centuries, the Ukrainian nation has proven that no one will deprive us of these qualities. This truth was confirmed by the fateful revolutions for independent Ukraine and the war with the Russian invader. The aggressor can try to deprive us of light or warmth and seize our home and land, but he cannot take away either dignity or freedom from Ukrainians,” the prime minister said.

The annual session of the North Atlantic Treaty Organization (NATO) Parliamentary Assembly coincided with the Day of Dignity and Freedom.

Mr. Zelenskyy addressed the assembly, saying that the united west must remain principled in countering Russian aggression and that joint action is genuine peacekeeping.

The president said that millions of Ukrainians and the majority of citizens of western states support Ukraine’s European and Euro-Atlantic integration.

“Now, when we are defending European values ​​not in the squares and streets but on the battlefield in a full-scale war, it is absolutely obvious how unfair and unnatural Ukraine’s alienation from Europe was. … I urge you to do everything in your power so that our community of nations – nations of values – will never again be divided or weakened!” he said.

“We will overcome everything. Endure. Survive. Prevail! And on the Day of Dignity and Freedom, we will gather on Indepen­dence Square, where dignity and freedom have always been protected. On the granite, the barricades during the Orange Revolu­tion and the Revolution of Dignity, we celebrated the 30th anniversary of Ukraine’s independence. It will be where we celebrate the Victory Day of Ukraine, in a peaceful Kyiv, in a peaceful Ukraine,” Mr. Zelenskyy said.