2014: From Euro-Maidan to Revolution of Dignity 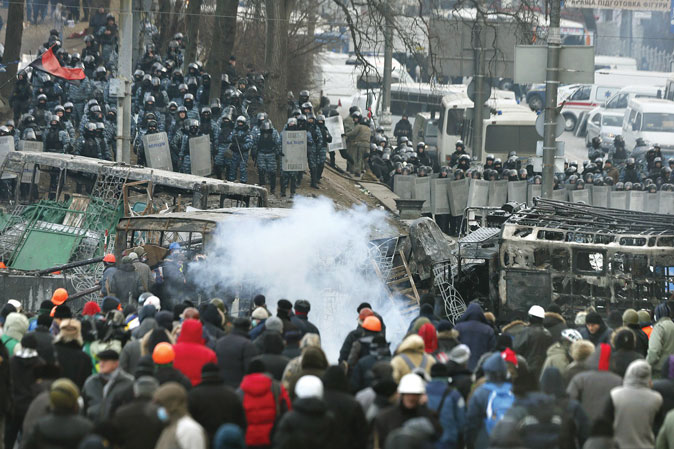 Vladimir Gontar/UNIAN
The scene on January 20 on Kyiv’s Hrushevsky Street, where violent clashes between the Berkut and protesters broke out on January 19 and were continuing.

During 2014, what started out as the Euro-Maidan was transformed into the Revolution of Dignity. By year’s end, Ukraine had a new president, a new Verkhovna Rada and a new government. And, at the end of the year, the Rada voted to abandon the country’s previous “non-bloc” status and set a course for NATO membership. A civilizational choice had been made.
As the year began, there was concern about the regular presidential election that was to be held in March 2015 as the opposition – that is the pro-Western parties of Ukraine – appeared to have no unified election strategy other than being against Viktor Yanukovych. Ukrainian Democratic Alliance for Reform (UDAR) Chair Vitali Klitschko was calling on his rivals to ditch their campaigns and unite behind his single candidacy. The expected Batkivshchyna candidate, Arseniy Yatsenyuk, and Svoboda party candidate Oleh Tiahnybok said they would compete independently in the first round of the presidential election. Billionaire confectionary magnate Petro Poroshenko also was planning to throw his hat into the ring. The concern among observers was that so many candidates could cannibalize the pro-Western vote or spread it too thinly, letting another victory slip through their fingers. On January 10 came news of a rift between Euro-Maidan activists and leaders when the Euro-Maidan Citizens Council demanded that opposition leaders settle on a single presidential candidate by January 11 or else face protests.
Meanwhile, public demonstrations in support of Ukraine’s European orientation and against President Yanukovych’s decision to scrap closer ties with the European Union continued. On January 5, about 10,000 people gathered at Kyiv’s Independence Square – the Maidan – for the first major opposition rally of the new year.
The government’s violence against opposition activists also continued. As the Euro-Maidan entered its eighth week, former Internal Affairs Minister Yurii Lutsenko, a leader of the movement, was beaten the night of January 10 during scuffles with the Berkut after the police brutally beat demonstrators that evening. Mr. Lutsenko suffered a concussion, head trauma and wounds that landed him in intensive care.
Things got worse later in January when Kyiv erupted in violent clashes between Euro-Maidan protesters and police after the Verkhovna Rada, in a controversial vote – conducted in a wholly illegal manner – on January 16 passed a series of draconian laws curtailing freedoms of speech and assembly. What have been labeled the “dictatorship laws,” signed by President Yanukovych on January 17, created the legal pretext for the government to launch a widely anticipated mass police operation to forcibly clear the Euro-Maidan territory in central Kyiv occupied by the opposition.
On January 19, young demonstrators led by the radical Pravyi Sektor group attempted to storm government buildings, and Hrushevsky street became the site of battles between protesters and Berkut forces. Berkut eventually began firing tear gas canisters and stun grenades to force the demonstrators away from their barricade. Many protesters began digging out cobblestones and flinging them at police, along with Molotov cocktails. The nationalists were soon joined by soccer hooligans, also targeted by the January 17 laws, as well as Euro-Maidan activists. By midnight, at least half a dozen buses – placed by police to form a wider barricade against demonstrators – were thoroughly burnt. Berkut upped the ante against demonstrators by spraying water from water cannons in their direction (amidst freezing temperatures) and firing rubber bullets and live metal cartridges. The next night snipers fired metal bullets at the protesters.
The result was at least five deaths and over 1,300 injured protesters, as well as more than 120 injured police.
The Yanukovych government responded to the protests with a campaign of state terror in which activists were subjected to beatings, kidnappings, torture, shootings and murder carried out by the Berkut special forces. Overnight on January 19-20, the first kidnappings by Berkut forces were reported. The kidnappings and beatings escalated significantly the next few days. Civic activists Ihor Lutsenko and Yurii Verbytskyi were kidnapped on January 21. Mr. Lutsenko surfaced a day later and reported being tortured, while Mr. Verbytskyi was found murdered. Auto-Maidan leader Dmytro Bulatov disappeared on January 22 and suffered eight days of beatings and torture before being left for dead in a forest. Two other activists, ethnic Armenian Serhii Nihoyan of the Dnipropetrovsk area and Belarusian citizen Mykhailo Zhyznevskyi of Bila Tserkva, were killed by sniper fire during battles on January 22, which happened to mark the Unity Day holiday in Ukraine.
Opposition leaders responded by declaring on January 22 that they would lead the formation of a People’s Council and People’s Election Commission as parallel structures to the Verkhovna Rada and the Central Election Commission. They also set an ultimatum to the government to either hold pre-term elections or face an offensive strike. There was palpable fear of a forceful dispersal of the Maidan that evening, but more than 50,000 supporters responded – despite the frigid temperatures and falling snow – to the opposition’s call to protect the Maidan. Thus, the Maidan remained intact.
January 26 was a day of funerals for 21-year-old Mr. Nihoyan and 25-year-old Mr. Zhyznevskyi. Over 1,000 people took part in Mr. Nihoyan’s funeral in the village of Bereznuvativka, Dnipropetrovsk Oblast. Radio Svoboda reported his father said, “Maidan must hold out. My son died for Ukraine.” Mr. Nihoyan’s parents had sought refuge in Ukraine from the violence over Nagorno-Karabakh shortly before their son was born. Mr. Nihoyan had served as one of the voluntary defenders of the Maidan since December. In Kyiv, thousands of Euro-Maidan activists and other Kyiv residents came to bid farewell to Mr. Zhyznevskyi, who had come to Ukraine about 10 years earlier from his native Belarus seeking refuge from persecution. In Ukraine he was active in the nationalist UNA-UNSO movement.