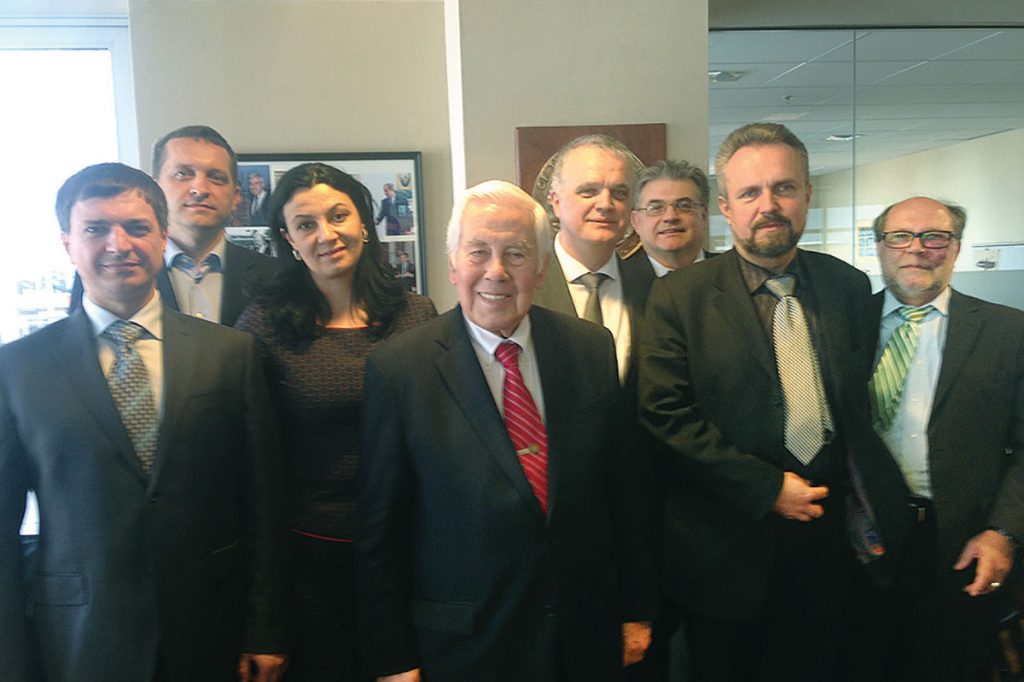 Washington – Four first-time Ukrainian national deputies from the civil society movement and the Euro-Maidan Revolution of Dignity, joined by officials from Ukrainian government agencies and think tanks, brought their message of determination and hope to the Obama administration, Congress, and academic and research centers in the U.S. capital during the week of April 21.

Also part of the delegation were: Taras Oliinyk,  first deputy head of the State Agency for E-Governance in Ukraine; Oleksiy Gridin, advisor to the Minister of Defense; Maj. Yuriy Moshkavets (ret.), director of the Center for Military Reform; and Anatoli Pinchuk, president of Ukraine Strategy, a Kyiv-based think tank.

Meetings and consultations were held at the White House, Senate, House of Representatives, Department of State, Department of Defense, Department of Treasury and the World Bank, as well as with the news media and think tanks. The itinerary took into account not only the many friends of Ukraine who support providing additional aid to Ukraine – including defensive lethal weapons, stronger sanctions against Russia, and more economic and technical assistance – but also those who are less forthcoming with support.

Meetings with administration officials took the delegation to the White House, where the Ukrainian officials met with Dr. Michael Carpenter, special advisor for Europe and Eurasia at the Office of Vice-President Joe Biden; the Department of State, where they spoke with Eric Rubin, deputy assistant secretary in the Bureau of European and Eurasian Affairs; and the Department of Treasury, where they conferred with Brian O’Toole, senior sanctions policy advisor of the Office of Foreign Assets Control (OFAC).

Among the most substantive and productive meetings were separate extended sessions with senior professional staff of the Senate Foreign Relations Committee, the Senate Ukraine Caucus and the Commission on Security and Cooperation in Europe.

A reception for the delegation was held at the Capital Club, hosted by leading corporations in the LNG industry, including LNG Alliance. A working dinner at the Cosmos Club for members of the delegation engaged in defense reform was hosted by Dr. Michael Pillbury, consultant at the U.S. Department of Defense and senior fellow at the Hudson Institute. A lunch at the American Foreign Policy Council with leading libertarian political activists was convened by Mr. Perchner, president of the AFPC.

The delegation also met with Richard Lugar, former senator, president of the Lugar Center and co-author of the Nunn Lugar Act that paved the way for the elimination of over 7,000 nuclear warheads in the USSR; Ambassador William Miller, Wilson Center scholar and former U.S. ambassador to Ukraine, and Ambassador Temuri Yakobashvili, president of the New International Leadership Institute and former ambassador of Georgia to the U.S.

The itinerary was prepared by the Center for U.S.-Ukrainian Relations (CUSUR) and the Ad Hoc Committee for Ukraine (AHCU), in cooperation and with assistance from the Embassy of Ukraine in Washington. Support was provided also by the Illinois Division of the Ukrainian Congress Committee of America and the Organization for the Defense of Four Freedoms for Ukraine (ODFFU), and facilitated by Mykola Hryckowian, Washington bureau director of the CUSUR and AHCU Executive Committee chair, and Borys Potapenko of the AHCU and ODFFU.

The new Ukrainian legislators came to Washington determined to convince members of Congress and officials of the administration that the situation in the areas of the Donbas occupied by the Russian military is deteriorating rapidly; the Minsk I and II agreements are being violated on a daily basis; and a new Russian offensive is imminent. The Ukrainian government has complied with its obligations under the Minsk agreements, including withdrawal of heavy artillery and other conditions, including not initiating hostile fire, the delegation noted. Nonetheless, 75 Ukrainian service members have been killed and many more wounded since the second Minsk agreement was signed two months ago.

According to official observers from the Organization for Security and Cooperation in Europe (OSCE), Russia is not removing its tanks and heavy artillery. Instead, military units under the Russian Federation Armed Forces Command continue shelling the positions of the armed forces of Ukraine and are increasing their numbers in military personnel and advanced weapons systems. These attacks are mainly carried out with 120mm and 82mm mortars, anti-tank guided missiles (ATGM) and by a new automatic grenade launcher – the AGS 40, stated Maj. Moshkavets, who had returned from the front lines the day before departing for Washington.

He added that there are now 720 modern Russian tanks in the occupied Donbas, as well as 595 armored fighting vehicles, 393 multiple-launch rocket systems, 694 artillery systems, 66 air defense systems, two submarines, four OTR-21 Tochka (SS-21) short-range tactical ballistic missile systems, eight TOS-1 Byratino 220mm multiple rocket launcher systems, and 40,940 military personnel, consisting of 8,910 soldiers of the Russian Federation armed forces and 32,030 of illegal military formations. What is more, a Russian joint command and a system of army corps for Russian forces were created between the Luhansk and Donetsk regions in Debaltsevo. This does not even include the immense concentration of troops and offensive military equipment massed on the Russian side of the border, Maj. Moshkaavets noted.

The delegation stressed that Ukraine is in need of military equipment, such as advanced systems like the Javelin anti-tank shoulder-fired missiles. However, the troops also need basics, such as bullets for their Soviet-era rifles and shells for artillery, as well as training.  Senior professional congressional staffers who recently traveled to the war zone confirmed that they witnessed how Ukrainian troops are in short supply of all forms of ammunition. Nonetheless, observers say it appears that the White House is not only reluctant to agree to provide modern lethal defensive weapons, but that there also may be an unofficial embargo on U.S. allies selling even rifles and bullets to Ukraine.

As noted by some officials, the administration’s contention that it supports Ukraine while standing by as Ukraine’s capacity to resist Russia’s military diminishes, is pusillanimous in the extreme.  Frustration has reached a point where they openly speak of two or three people in the White House who are guiding the president. Rather than continuing to call for a reversal, some officials are now urging a final decision. They contend that even a negative decision is better than continuing the canard that a policy on providing weapons is still under review. The conclusion seems to be that either the administration policy is simply fatuous or it expects the Ukrainians to stop fighting. In sum, Ukrainians are being denied the means to defend themselves.

The delegation responded that Ukraine will not stop fighting. Even without outside assistance, they will continue to resist in this existential struggle. Citizens will mobilize and form a home guard to fight behind enemy lines. The only question is the amount of casualties on both sides. Without support from the West, the casualties will be higher and the war longer. The 1.2 million internal refugees will multiply and millions will seek refuge in member countries of the European Union. The military threat to other countries, especially the Baltic states, will increase. According to the national deputies, Russia’s goal is not just to dismember Ukraine, but to eliminate Ukrainians as a political nation and re-establish the “Great Russian” empire.

It was noted in the delegation’s meetings that after a year of war waged by a seemingly invincible army, the Russians have occupied Crimea and only a sliver of Donbas, while suffering significant losses in men and equipment. A year ago when Russian troops took over Crimea, Ukraine practically had no army at all. Today, the national deputies said, Ukraine has built an army the hard way. A war-tested army of motivated patriots is going into battle outgunned and undertrained, but consistently causing more and more casualties to the enemy. Vladimir Putin now knows that his quick and easy victories in Georgia’s Abkhazia and Ossetia and in Ukraine’s Crimea have come to an end, they stressed.

In this regard as well, U.S. officials noted the shift in emphasis. Last year many questioned Ukraine’s capacity and speculated about when the country would capitulate. Now the talk is of how much Russia is suffering and how Mr. Putin needs to hide the war’s economic cost and the losses in men and equipment.

New initiatives to overcome White House resistance on providing weapons were discussed extensively with administration and congressional officials and policy analysts. Veto-proof military appropriations legislation and the option of Ukraine purchasing weapons from countries that can resist pressure from the White House are some of the approaches under review. Also noted was the capability of Ukraine’s military industry to produce its own weapons, including anti-tank missiles, but American companies or other foreign partners would be needed to provide targeting or other components. Some U.S. officials told the delegation that another Russian offensive could trigger increased military assistance.

The Ukrainian deputies and many U.S. officials and NGOs agreed that there can be no let-up in seeking avenues to help the Ukrainian military. In this regard, U.S., Canadian and United Kingdom military personnel presently training the Ukrainian National Guards is seen as a positive development that can be replicated with regular Ukrainian army troops in the near future.  The need for help in establishing a Ukrainian Strategic Command was also raised, as was the need to continue and accelerate reforms in Ukraine’s Defense Ministry and in the military industrial complex.

A second pressing issue for the delegation was government and economic reforms, including the fight against corruption. Among a host of legislative initiatives, the Verkhovna Rada recently passed important legislation to professionalize and depoliticize the civil service. While headway is being made and successes are being registered every day in the struggle against corruption, it remains a daunting task. Concerted actions by both the executive and legislative branches, including establishing the Anti-Corruption Bureau, continues to gain momentum. Recently, President Poroshenko appointed the first head of the Bureau that is charged with ending endemic and widespread government corruption.

The delegation also spoke of the difficulties in the Procurator General’s Office of Ukraine. Since May 2014 there have been three appointments to head the office. There is significant concern over the slow pace of removing corrupt officials. No corrupt officials have been put in jail, while others have been allowed to escape to Russia or the West.

Bureaucratic infighting is yet another hurdle for many practical issues, including moving forward on establishing a system for e-governance. There are eight ministries involved in e-governance. A centralized super-authority is necessary to deal with the turf wars between ministries. E-governance can become an efficient and economical way to provide government services and a weapon in the fight against corruption by creating transparency and accountability.

Foreign debt relief, compliance with International Monetary Fund requirements,  and stimulus for business development and increased production, were major concerns for the delegation.  The new government has had only a few months since the parliamentary elections to start grappling with the economic crisis left by the Yanukovych regime. Simultaneously, the yearlong war that shows no sign of abating continues to sap the attention and energy of the people and government.

The national deputies called for all forms of financial assistance to be highly targeted and regulated, as well as for a free trade agreement with the U.S. The Conference on Investment in Ukraine to be held in Washington this summer will be an important measure of international sentiment that the reform process is working.

Doubters brought up previous unsuccessful efforts at reform and asked why this time it would be different. The Ukrainian deputies responded that, following the Orange Revolution, civic activists shunned government service; today patriotic young Ukrainian professionals are going into government, where they are taking on the bureaucrats and other corrupt officials. In both, the war with Russia and against the old guard in government, there is no turning back for us – Ukraine will prevail.

Mykola Hryckowian contributed to this article.