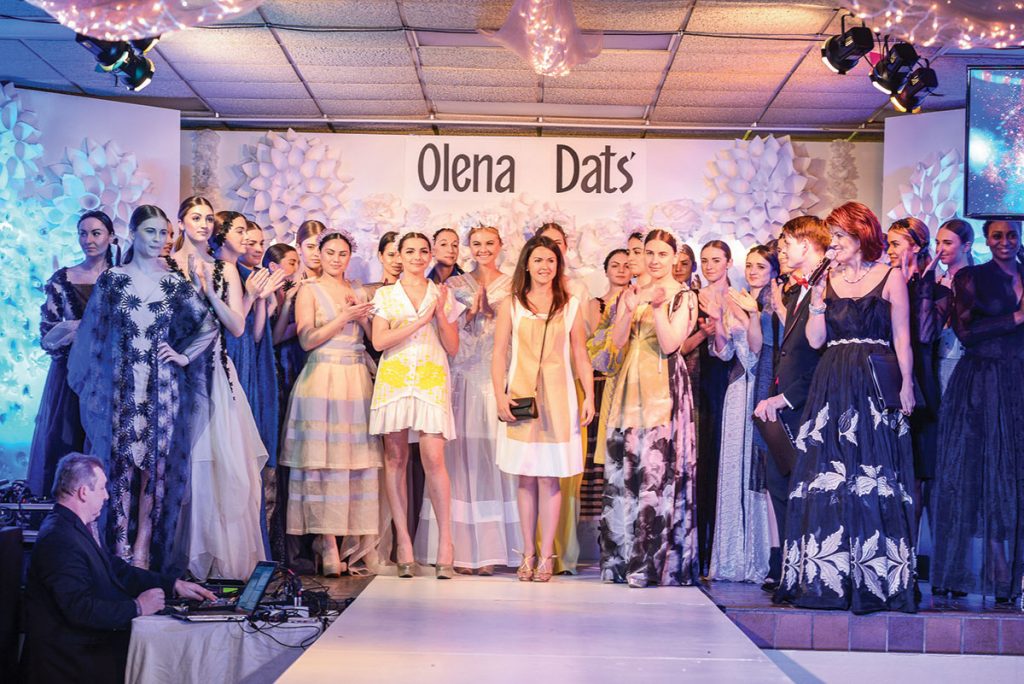 CLIFTON, N.J. – The first thing guests saw when they walked into the hall for a recent charity event was the lovely white flowers. Masking the walls and adorning the stage were immense panels of flowers. The tranquil, elegiac melodies of Marian Pidvirny’s violin filled the room. Immediately, the words of Khrystyna Panasyuk’s song came to mind: “White Swans in the heavens with broken wings… Lit thousands of hearts…” It’s a song dedicated to those who died for Ukraine in the past two years.

The first event organized by newly established Branch 137 of the Ukrainian National Women’s League (UNWLA) in Clifton, N.J., was an April 25 fund-raiser for families of the fallen soldiers taken by the war in the Donbas, primarily those with children. This initiative of the perpetually optimistic and energetic Valentyna Tabaka, the branch’s president, was inspired by the work of another immensely talented Ukrainian – Olena Dats, a fashion designer who works are sold in Ukraine and internationally (the United States, France, Belgium, Russia, Kuwait and Saudi Arabia).

Ms. Dats recently completed her U.S. fashion tour, staging shows in New York, Philadelphia, Chicago and Clifton. Her innovative styles could be seen at the benefit, the lighting and music of the room changing to fit the varying tone of the collections, each inspired by an aspect of the Euro-Maidan. Incorporating the traditional Ukrainian embroidery into modern high fashion, Ms. Dats conveyed the beauty of Ukraine: past, present and future.

Also part of the evening’s program was the introduction of a new bilingual English-Ukrainian magazine. The goal of the Ukrainian American magazine InLove is to present contemporary Ukrainian cultural life to the American reader. The attention of the whole world is currently focused on the war in Ukraine and the publishers want to depict a flourishing nation, a beautiful country with a rich culture and history. They want readers to familiarize themselves with the Ukrainian people, as well as the current movements of Ukrainian art in Ukraine and America. Most importantly, InLove attempts to share the energy that lifts Ukrainians every day to continue to fight and thrive.

Editor-in-Chief Olena Vasilevsky presented the magazine for the first time in New Jersey and discussed her plans for the future: the spring issue of the magazine celebrates innovative, talented and fearless people whose efforts are changing the world. Max Chmerkovskiy, Svyatoslav Vakarchuk and Nastya Pryhodko are just a few of the many people making an impact who are featured in InLove.

Ambassador Yuriy Sergeyev, permanent representative of Ukraine to the United Nations, was present at the benefit banquet. Every guest, treated to the lovely music, delicious dinner and beautiful fashion thoroughly enjoyed the evening – especially the presence of Dr. Sergeyev and his wife, Dr. Nataliya Ivashyna Sergeyev. During his speech, Ambassador Sergeyev thanked everyone who had gathered during the cold winter months to stand up for Ukraine and its people, and he wished the newly founded UNWLA branch strength and inspiration to continue organizing such beautiful gatherings to benefit Ukraine.

Ms. Dats, Anna Marchuk, Myhailo Turovskiy, Elena Lezhen, Chrystyna Koziuk and Victoria Kutukova donated their artistic works to help raise money for the orphaned victims of the war. The winners of these beautiful raffle prizes received compounded joy: in receiving beautiful hand-made items and in knowing that their donations will help a suffering family.

The success of the evening was also attributed to the support of numerous sponsors, among them the Selfreliance N.J. (Federal Credit Union), Ukrainian Federation of America, Ukrainian National Association and Hudson Valley Resort. Among those who donated food and decorations for the venue were many Ukrainian and American organizations.

Those organizing the fund-raising event did not forget about proud sports fans; they were able to watch a live broadcast of Wladimir Klitschko’s title defense that night and cheer his victory. After the delicious dinner, guests danced and listened to the music of the group Anna Maria. The group also provided beautiful lighting during the fashion show and throughout the evening.

The Rev. Oleh Zhownirovych and the Church Council of Holy Ascension Ukrainian Orthodox Cathedral in Clifton graciously offered the venue and helped organize the evening. Although decorating the hall, preparing the food, and planning the small and large details took much time and effort for UNWLA Branch 137 members, their husbands also pitched in with much-needed support and assistance, without which the evening could not have succeeded.

Orysia Soroka is press secretary of Branch 137 of the Ukrainian National Women’s League of America.

Translated by Sofia and Maria Soroka.