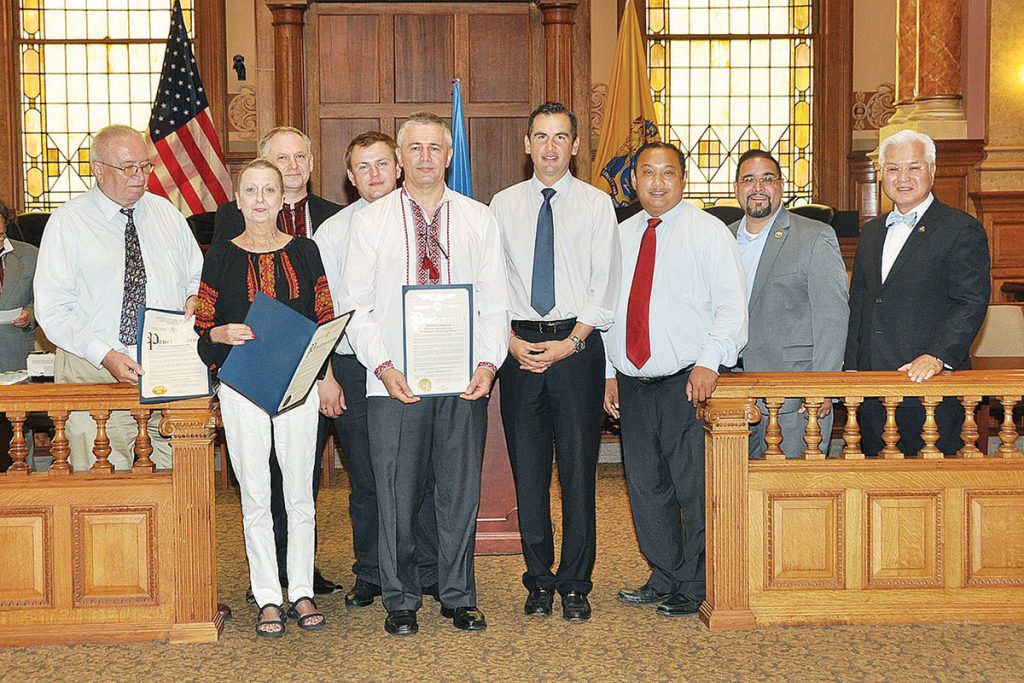 JERSEY CITY, N.J. – The Jersey City branch of the Ukrainian Congress Committee of America delegated the preparation of local celebrations of Ukraine’s 24th anniversary of independence to the Jersey City National Home and the Jersey City Community Center. National Home President Ihor Kolinets appointed Anna Czujko Rozij to organize the festivities. With the cooperation of Vasil Nikolyn, Ms. Rozij started to prepare the internal and external celebration. She also worked with Yolenny Vargas from the mayor’s office to prepare the proclamations, print the posters and flyers, and the program.

On Sunday, August 23, after liturgy, everyone gathered at the Ukrainian National Home for the celebration. The Rev. Vasyl Howerla started the event with a prayer, followed by the American and Ukrainian anthems. The program included entertainment, music and speeches

Mistress of ceremonies Olga Nikolyn invited all present to the buffet prepared by Mary Furrey, the building manager, who secured a large sheet cake with the words “Happy 24th anniversary Ukraine.”

In attendance were Jersey City’s Ukrainian residents as well as visitors from Ukraine who all came together for the party. A surprise visitor from Ukraine, Oksana Bacz, offered beautiful Ukrainian songs.

The next day, August 24, those who could gathered at city Hall for the formal flag-raising ceremony with the participation of Jersey City’s elected officials. Senior citizens, young people and children all wore their embroidered best.

At 11 a.m. the master of ceremonies started the official portion of the event, asking Father Howerla to read a prayer for Ukraine’s future and well-being. Mayor Steven M. Fulop, City Council President Rolando Lavarro and Councilman Michael Yun were introduced.

This year the Ukrainian community recognized two of its outstanding members for their dedication and hard work. Mayor Fulop presented certificates of appreciation to Ms. Rozij and Olexander Haluszczak.

Short speeches were delivered in Ukrainian by Mr. Kolinets and in English by Mr. Nikolyn. Mayor Fulop also addressed the ceremonial gathering.

The culmination of the ceremonies at City Hall came when Mayor Fulop, his council members, revered senior citizen Ilia Shewchuk, Father Howerla and local children raised the Ukrainian national flag – a scene repeated hundreds of times that day all around the world.