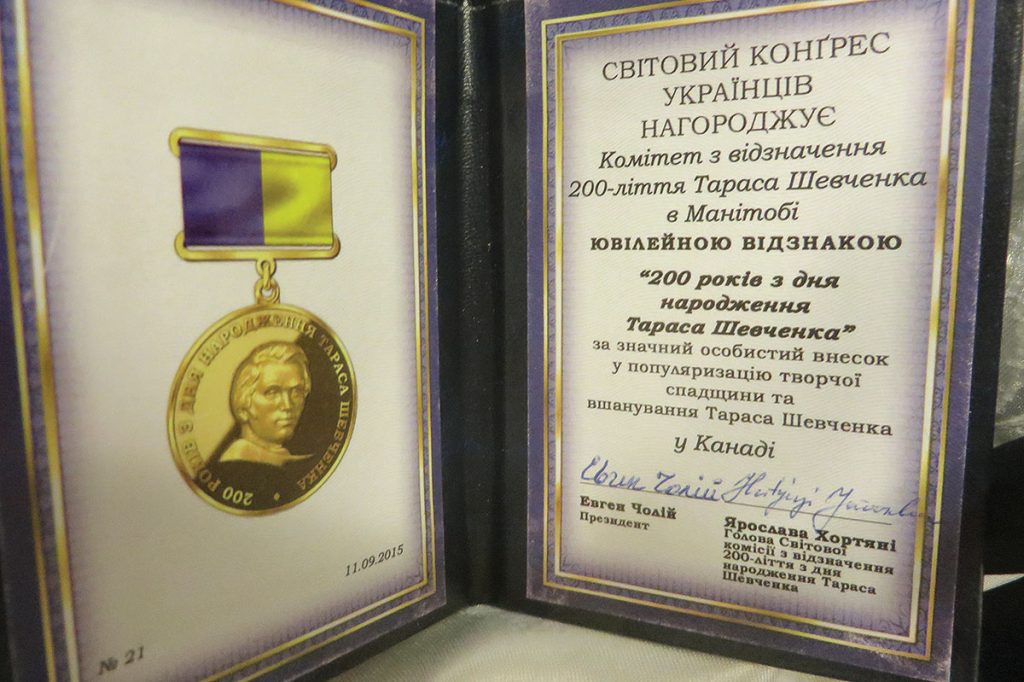 WINNIPEG, Manitoba – At a special ceremony of the Ukrainian World Congress held in conjunction with the UWC’s 2015 annual general meeting in Madrid, the UWC’s World Commission on Commemorating the 200th Anniversary of the Birth of Taras Shevchenko awarded the Shevchenko 200 Committee of the Ukrainian Canadian Congress – Manitoba Provincial Council (UCC-MPC) and the Manitoba Parents for Ukrainian Education (MPUE) the UWC’s Commemorative Award-Medal “200 years since the Birth of Taras Shevchenko” for their significant contribution to popularizing the creative heritage of Shevchenko and honoring him outside of Ukraine.

UCC-MPC was honored for a year’s worth of projects celebrating and promoting the life and legacy of Taras Shevchenko. The committee, chaired by Myroslava Pidhirnyj, celebrated receiving the award in late October.

The most important of the projects undertaken was a travelling Shevchenko exhibition. This consisted of 11 illustrated panels showing the life of Shevchenko, with particular reference to his presence in Manitoba and Canada. The exhibition was launched at the Provincial Legislative Building and was displayed at various locations in Winnipeg, Dauphin, Brandon, Vita, Rosa, Gimli, Sandy Lake, Gardenton and Gilbert Plains.

Other important activities for which the committee was honored included the renaming of a portion of Aberdeen Avenue in Winnipeg to Taras Shevchenko Way. A total of 10,000 copies of a Shevchenko brochure were distributed to the general public. Book exhibits of Shevchenko’s works and those about him were shown at the main Public Library in Winnipeg, at St. Andrew’s College, Holy Family Home and the University of Manitoba Library. At the suggestion of the UCC-MPC, the Province of Manitoba and the City of Winnipeg designated March 2014 as Taras Shevchenko Month. Working with the Ukrainian Students’ Association at the University of Manitoba, a film festival showing movies based on Shevchenko’s works and themes was held at venues across Winnipeg. A gala Shevchenko concert was presented to a sold-out house at the Jubilee Auditorium on March 8, 2015

MPUE was honored for its “Taras Shevchenko: 200 Years Celebration Art Project.” The project saw the creation of six art panels that expressed the significance of Shevchenko for young Canadians enrolled in the English-Ukrainian bilingual programs in Manitoba. Over 600 students from kindergarten to Grade 9 were involved in creating this project.

The children’s art work and collective artistic efforts were combined into fabric-based art panels forming a traveling exhibit which has been displayed at many Manitoba venues throughout 2014 and 2015. The art exhibit has been enjoyed by thousands of people of many cultural backgrounds, and provides the public with an introduction to Shevchenko and his legacy. Reproductions of the panels were printed as greeting cards.

MPUE is an association of parent volunteers dedicated to promoting, enhancing and expanding the English-Ukrainian Bilingual Program in Manitoba. MPUE is the umbrella organization that provides support for the parent organizations associated with each of the 12 provincial schools providing the program.