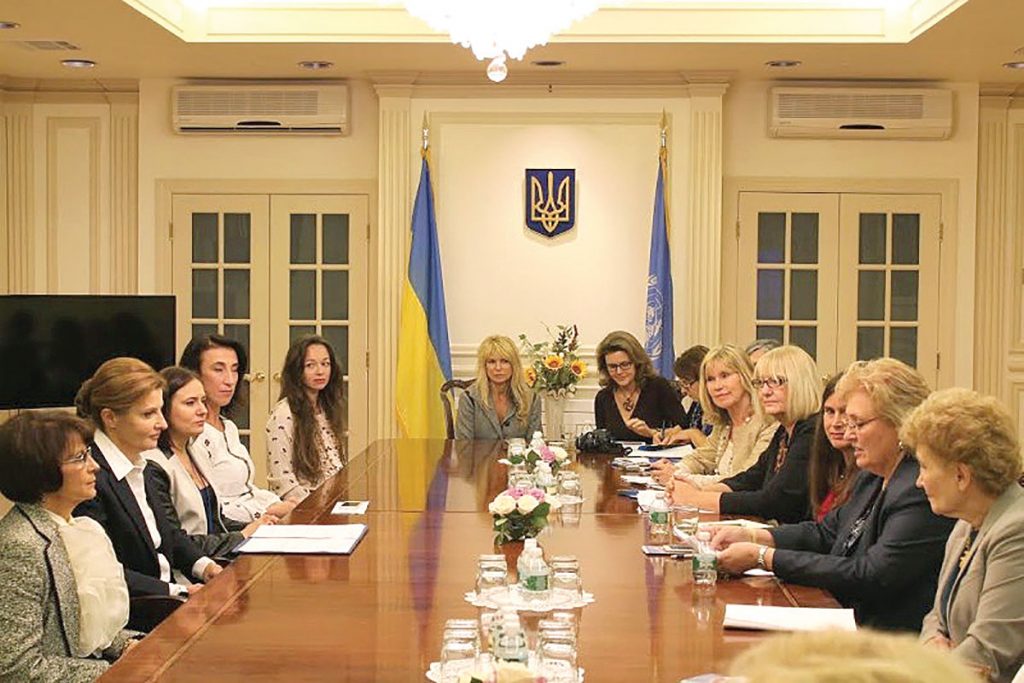 Our Ukrainian diaspora gathered on many occasions during 2015 to show support and solidarity with brethren in Ukraine, to commemorate important events in Ukraine’s history, and to discuss ways to help Ukraine through its current crisis.

The past year was a particularly productive one for the Ukrainian World Congress (UWC), the international coordination body for Ukrainian communities in the diaspora. Representing the interests of over 20 million Ukrainians, the UWC currently has member organizations in 33 countries. And it continues to grow every year.

The UWC began 2015 with a worldwide appeal in the matter of Nadiya Savchenko’s release from prison in Russia. The UWC urged Ukrainians around the world to publicly support Lt. Savchenko, a political prisoner in the Russian Federation. Lt. Savchenko is a former Ukrainian air force pilot, a member of the Ukrainian Parliament and a Ukrainian delegate to the Parliamentary Assembly of the Council of Europe (PACE).

In a January 14 letter to Anne Brasseur, president of PACE, the UWC underscored: “The kidnapping, imprisonment, involuntary psychiatric evaluation and solitary confinement of Ukrainian Member of Parliament Nadiya Savchenko are all reprehensible acts that call for immediate and unequivocal action by the international community.” The UWC called on PACE to avail itself of all necessary means to secure her release as well as that of all prisoners illegally detained by the Russian Federation.

On March 9-20, at the annual United Nations Commission on the Status of Women (CSW), the WFUWO helped to ensure that Ukraine’s representatives had ample opportunities to present at the conference and that Ukraine’s women could speak openly about the violations of their rights to peace and security, as well as about their deteriorating situation under the strain of Ukraine’s defensive military response.

During the CSW, the WFUWO focused its attention on a few key issues: revealing the effects of Vladimir Putin’s aggression on Ukraine; providing a show of support for Ukraine’s indigenous Crimean Tatar community displaced in large numbers after Russia’s invasion of the Crimean peninsula; engaging in a discussion of the barbaric wartime violence against women in eastern Ukraine; and protecting those who find themselves in need of medical care while being isolated or displaced by the conflict. The WFUWO also expressed support for the well-being of all women in the world.

Ukrainian women at the CSW carried banners in protest against Russia’s war in Ukraine and distributed literature explaining the courage of Lt. Savchenko.

The summer was especially busy for diaspora organizations. On June 5, the Weekly reported that the Australia-Ukraine Chamber of Commerce would be fully operational by the end of the year to pursue business opportunities between the two countries. This project was initiated by the Australian Federation of Ukrainian Organizations (AFUO) and Dr. Petro Matiaszek was named the chamber’s Kyiv-based president and Pete Shmigel the Sydney-based interim chair.

AFUO President Stefan Romaniw stated, “The Australia-Ukraine Chamber of Commerce will become a key facilitator for Australian businesses seeking opportunities in Ukraine and vice versa. It will help grow the current $150 million trade relationship for the benefit of both countries, and it will support the new Australian Embassy in its trade work in any way that it can.”

According to Dr. Matiaszek, market feedback suggests many potential areas of mutual benefit including international education, aviation, aerospace, mining services, resources (such as manganese, gas and uranium), hospitality, fashion, outsourcing of services and manufacturing, agriculture, as well as governance systems. Other areas of activity for the Australia-Ukraine Chamber of Commerce are organizing a business delegation exchange and advocating visa reform for travel between Australia and Ukraine.

Also in June, Ukraine’s President Petro Poroshenko met with UWC leaders, President Eugene Czolij and Secretary General Stefan Romaniw, and UCC President Pavlo Grod. UCC President Grod was in Kyiv as part of a delegation that accompanied then Canadian Prime Minister Stephen Harper on a visit to Ukraine ahead of the G-7 summit.

Mr. Poroshenko noted that the UWC is a powerful force in the protection of Ukraine’s interests in the world. He also expressed the necessity of countering Russian propaganda and promoting objective information on events in Ukraine. “Telling the truth to people all over the world is an extremely important mission not only for the Ukrainian president, Foreign Affairs Ministry, government and civil organizations, but also for the diaspora, the opinion of which plays a significant role,” he emphasized. Ukraine’s president also positively evaluated the results of the G-7 summit in support of Ukraine, noting not only its position on the issue of compliance with the Minsk agreements, but also the G-7’s stand that the annexation of Crimea was illegal. He highlighted the importance of a visa-free regime for Ukrainians with the countries of the EU and also with Canada, Japan and Australia.

The UWC leadership also attended a ceremony at which President Poroshenko posthumously presented the Hero of Ukraine award to the family of Senior Lt. Ivan Zubkov, who died heroically defending the Donetsk airport. Additionally, Mr. Grod and the UWC delegation met with Vice Prime Minister and Minister of Culture Viacheslav Kyrylenko, who thanked the UWC for its support for Ukraine during its battle for territorial integrity, democracy and European choice.

UWC President Czolij reported that the UWC had established a mission in Ukraine in order to better coordinate actions. The established council includes Ukrainian diaspora representatives from 48 countries.