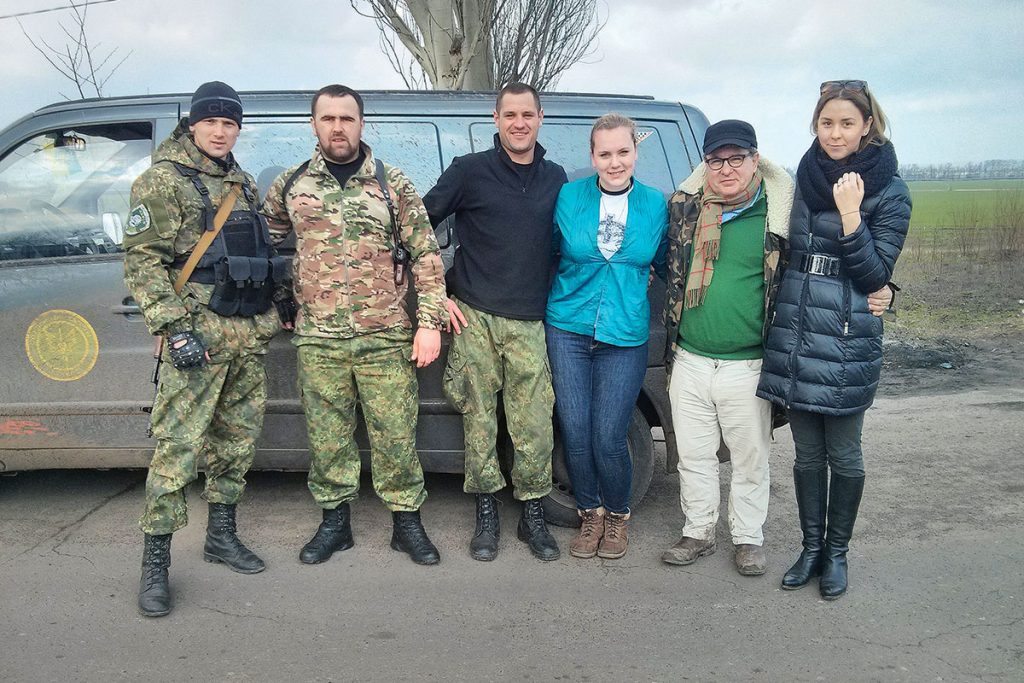 Ukrainian Weekly Editor | The Ukrainian Weekly | Subscription
Lviv students Iryna Tsybukh and Nastya Zhukivska with a Lviv SWAT unit and Taras Kuzio (second from right) at a roadblock on the approach to Kostiantynivka.

Two sets of volunteers have been crucial in the battle to defeat Vladimir Putin’s imperialism in eastern Ukraine. The first has been Ukrainian patriots who joined volunteer battalions. The second – just as important – has been the civilian volunteers throughout Ukraine who have supplied food, fresh water, uniforms, medical supplies, showers and washing facilities, and camouflage netting. I have visited civilians – primarily women – collecting, producing, cooking and supplying these products based in southern and eastern Ukraine and in Kyiv. One of the most incredible volunteers we met on a recent trip was a pensioner from Ivano-Frankivsk known as “Stepanivna” who provides medical care and lives off her pension.

In the third week of March I traveled with Natali Prylutskaya who on this trip was delivering food, (ex-British army) uniforms, a portable shower, fresh water and medicines to Ukrainian troops on the front line. She began this civil society activity 18 months ago after her brother-in-law was killed in action and puts her life at risk traveling to the frontline two or three times a month after organizing collections in Kyiv and Poltava. In the van were Natali, “Roman” (a Pravyi Sektor volunteer), and “Zhenya,” a soldier from Kharkiv who is in the 93rd Mechanized Brigade based in Cherkask, Dnipropetrovsk Oblast. Zhenya and the 93rd Brigade suffered losses around Donetsk Airport and they, together with paratroopers (airborne) became the famous “Cyborgs.” With us at the end of our trip were two students from Lviv, Nastya Zhukivska and Iryna Tsybukh, who had been giving lectures in local schools about the Euro-Maidan.

Our first stop was Yahotyn near Kyiv, where we picked up food supplies. The local deputy who heads collections for soldiers is known as the “Armenian.” A former professional soldier who had spent three years in Afghanistan in the 1980s, Armen Shakharyanz drives around in a car with the words “Armenomobile” painted on the side to collect donations.

The second stop was in Poltava, where we picked up foodstuffs from an elderly couple, Pavlo and Liudmyla Luchynsky, who have been providing goods from their farm since 2014. The couple are heroes to soldiers and their house is covered in photographs of soldiers and Ukrainian flags with handwritten comments. Liudmyla has made 10,000 varenyky for the troops and has kept a list on the wall of how many she had sent off to various military units.

On the road to the brigades

Then we drove to the 93rd Mechanized Brigade base in Cherkask, Dnipropetrovsk Oblast. This unit had grown from its peacetime number of 3,000 to nearly 10,000, and the huge number of tents looked like a set from a war movie. Arriving at the same time, also to deliver supplies, was a Ukrainian patriot from Vinnytsia who was bringing firewood for the soldiers.

From there we drove to the frontline, southwest of the “separatist”-controlled Donetsk and just to the south of Kostiantynivka. This is the last train station controlled by Ukrainians on the former Intercity line from Kyiv to Donetsk (after Kostiantynivka, the territory is controlled by the combined Russian-separatist forces). On the roads there are many checkpoints usually manned by Ministry of Internal Affairs special forces, including a SWAT unit from Lviv. All of the special forces and troops knew and respected Natali, and we had no difficulties getting through roadblocks and on to bases.

March 22 saw a resumption of hostilities by the Donbas militants across the entire frontline; this has continued unabated ever since. The biggest battles were south of Kostiantynivka in the region of Avdiyivka, where I was traveling with volunteers who were bringing supplies to Ukrainian troops.

On our way to Avdiyivka we skirted Donetsk Airport, now in the hands of separatists, and dropped off supplies at Pisky to a unit of soldiers of the 128th Brigade based under a bridge. Then we drove along terrible rural roads to damaged industrial buildings near Avdiyivka, where in battles a few hours later one Ukrainian soldier was killed and seven were wounded.

Our next drop-off, nicknamed the “Garage,” serves as a base for troops from a company of the 128th Brigade. Our plan to then travel to the base of the 25th Airborne Brigade was disrupted by attacks with machine guns, mortars and artillery.

After a short battle, in which Ukrainian forces returned fire, there came a negotiated “peremyria” (truce), during which we set off with an armed escort in front, driving along dark rural roads with massive potholes full of water and with no headlights so as not to give away our location. During what seemed a long drive, the battle resumed; the new military escorts who had taken over pulled us aside and said it was dangerous. We had little choice but to drive slowly in the dark through Ukrainian military and National Guard checkpoints to reach the 25th Brigade base set in the rear on high ground.

Ukrainian soldiers look askance at two factors in the Donbas conflict: the near total ineffectiveness of the Organization of Security and Cooperation in Europe (OSCE) and the Western charade that the Minsk accords are working.

When we asked about the work of the OSCE monitors, there were merely grins and smirks on the soldiers’ faces. The separatists do not shoot during the day when OSCE monitors move around, but after they return to their comfortable hotels and it gets dark, all hell breaks out every night. From dusk until dawn, there are no Minsk accords in the Donbas. Indeed, the soldiers’ disdain for the OSCE was evidenced the following day at 9 a.m., as we drove to Kostiantynivka and saw OSCE SUVs driving in the direction we were coming from.

Facing nightly attacks, Ukrainian soldiers smirked at the Minsk agreements. Ukrainian officers were realistic about retaking control of the separatist enclaves in the face of Russia’s continued military occupation and delivery of weapons, and its refusal to return control over the border to Ukraine. Ukrainian officers believed that taking back villages and rural areas would be strategically feasible, but there would be massive military and civilian casualties in retaking the major city of Donetsk, whose population is over 1 million They doubted the West would turn a blind eye to Ukraine flattening Donetsk in the same manner as it ignored Russian President Vladimir Putin’s destruction of the Chechen capital city of Grozny.

Three proposals have been put forward to revive or replace the impasse of the Minsk agreements.

The first, floated by Ukraine’s most pro-Russian politician, Viktor Medvedchuk (whose daughter has Mr. Vladimir Putin as a godfather), and backed by President Petro Poroshenko, is to replace separatist enclave leaders Aleksandr Zakharchenko and Igor Plotnitsky with oligarch Rinat Akhmetov and the leader of the Opposition Bloc and gas lobby oligarch Yurii Boyko. This policy flies in the face of the Euro-Maidan revolution and together with the appointment of Volodymyr Groysman as prime minster would lead to further declines in Mr. Poroshenko’s popularity.

A second more radical proposal by the Samopomich party is to accept reality on the ground of Russian control of the enclaves (http://m.bild.de/politik/ausland/ukraine-konflikt/donbass-shadow-government-45102202.bildMobile.html). Samopomich believes in “abandoning the Minsk deal and declaring rebel zones occupied territory, for Russia to finance and feed, without a chance for integration until the Russian army leaves.”

Alexander Motyl supports a policy of temporarily suspending Ukraine’s sovereignty over the Donbas separatist enclaves and deferring the elections to the OSCE or the United Nations to organize and conduct. Alternatively, Ukraine could suspend efforts to reintegrate the enclaves for 10 years and then ask the OSCE or the U.N. to oversee a referendum on self-determination in the occupied Donbas, allowing the citizens to choose to return to Ukraine, remain independent, or join Russia. Prof. Motyl has long proposed jettisoning the Donbas. This idea is popular in western Ukraine, where the rates of those conscripted for military service are the lowest; indeed, the two oblasts with the lowest number of Ukrainians turning up for military mobilization are Ternopil and Zakarpattia.

A third proposal, from Yulia Tymoshenko’s Batkivshchyna party, is to divide the security and political portions of the Minsk accords. Implementing security questions, such as the removal of Russian forces and equipment, returning the border to Ukraine and releasing political prisoners such as former military pilot Nadiya Savchenko, who was sentenced on February 22 by a Russian court to 22 years’ imprisonment, would be a prerequisite before turning to political questions, such as local elections and regional status within Ukraine’s overall plans for decentralization.

Batkivshchyna proposes changing the Normandy format talks to a Budapest format by expanding the group to include the United States and the United Kingdom alongside European Union representatives Germany and France, Ukraine and Russia. In 1994 in the Budapest Memorandum, the U.K., the U.S. and Russia provided “security assurances” on Ukraine’s territorial integrity and sovereignty in return for its nuclear disarmament. The change from Normandy (France, Germany, Ukraine, Russia) to Budapest format (those four plus the U.K. and the U.S.) should expand its brief from dealing only with the Donbas conflict, which is the center of attention in the Minsk agreements, to also covering the annexation of Crimea.

There is no question the Minsk accords are dead, but the big question is which of the three proposals will replace it. I would argue that the best of the three is the expansion of the negotiations from a Normandy to a Budapest format – it is time to bring in the United States and the United Kingdom so they can honor their security assurances to Ukraine.

Dr. Taras Kuzio is a senior research associate at the Canadian Institute of Ukrainian Studies, University of Alberta, and author of “Ukraine: Democratization, Corruption and the New Russian Imperialism” (Praeger, 2015), a modern history of Ukraine from 1953 to the present.