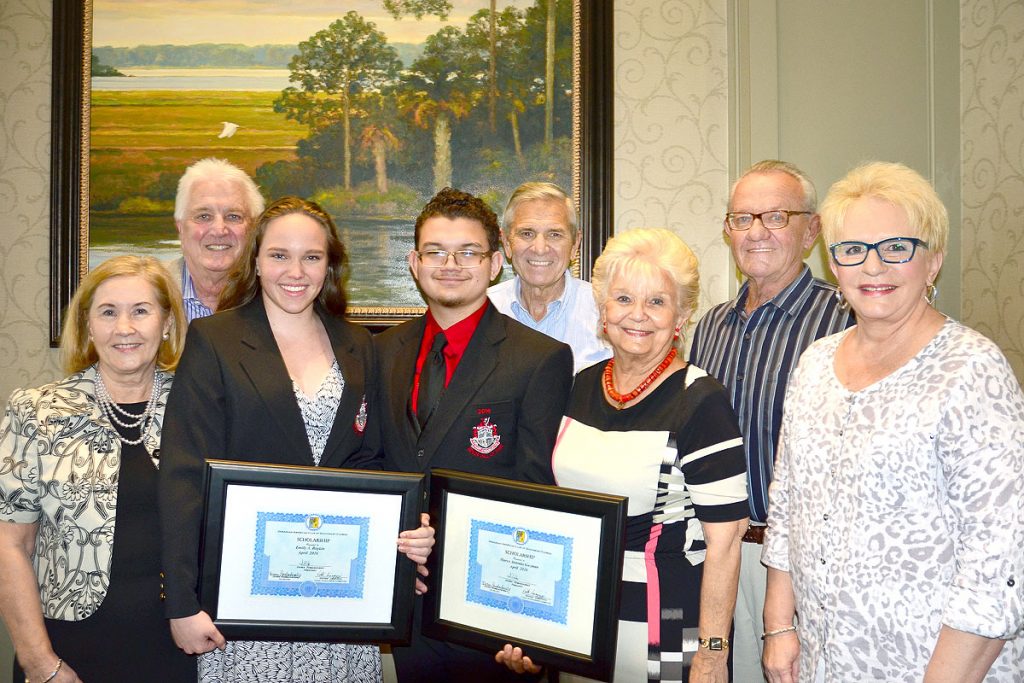 After a very brief business meeting, Ms. Tomashosky called upon Victor Lisnyczyj of North Port, chairman of the Scholarship Committee, to chair the affair. Mr. Lisnyczyj introduced all nine past recipients of scholarships by displaying their photographs on the screen and presenting the letters received from some of them. The letters were read by Scholarship Committee members Lidia Bilous, Ihor W. Hron, Katherine Steciuk and Gene Tomashosky.

Each scholarship applicant must write a 500-word essay on a Ukrainian theme. This year’s theme was presented as follows: “In November of 2015, a monument was dedicated in our nation’s capital in Washington, D.C., to memorialize the victims of the Holodomor (death by hunger) in Ukraine, 1932-1933. 1. What is the Holodomor? 2. How is this genocide symbolized in the design of the memorial monument?

This year’s scholarship recipient, Marco Antonio Guzman, a Port Charlotte High School senior, was introduced and asked to read his winning essay on the Holodomor.

Mr. Guzman is planning to study law or foreign service at the University of Florida. His academic awards include National Merit Scholar, National Hispanic Recognition Scholar, Horatio Alger Association Scholar and Advanced Placement Scholar with Distinction. His other activities include National Honor Society, Math Honor Society, Model U.N. Debate Team president, and many community service involvements. He was presented an award certificate and $1,000.

Because it was the 10th Jubilee Scholarship Awards Luncheon, the committee decided to make a second award. The recipient was Emily A. Boykin, another Port Charlotte High School senior, who plans to study art history and economics at the University of Florida.

Ms. Boykin’s academic honors are too numerous to be listed here. She founded and led ROS (Respect Our School), recognized by Charlotte County’s School Board as a group of innovative excellence in the public school environment. She was a member of the National Honor Society, Student Government Association and National ART Honor Society, and was a Parkside Parish volunteer and a Ponce de Leon nature park/bird sanctuary volunteer, among her many activities. She was presented with a certificate and a scholarship award of $500.

As in the past, an additional award of $250 was presented to last year’s recipient, Valerie Segebre, who attends Florida State University.