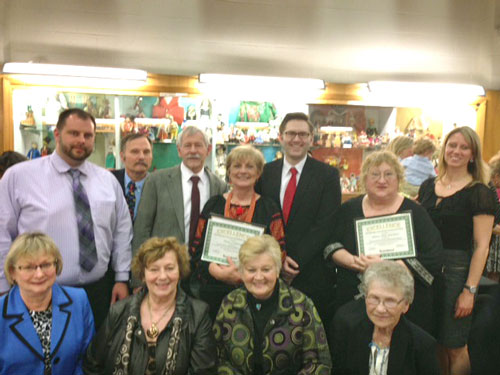 DETROIT – The International Institute of Metropolitan Detroit Inc. included two of Ukrainian American women among recipients of the 2016 Michigan International Professional Women’s Awards. The award recognizes distinguished women in Michigan, from different cultural backgrounds, who have succeeded in their professional endeavors and have markedly contributed both to their own ethnic community, as well as to the Michigan community at-large.

This event is a fund-raiser for the International Institute’s cultural educational programs that allow Michigan’s ethnic communities to become acquainted with one another, highlight their culture, promote their goals and work together for the benefit of Detroit and southeast Michigan.

The Michigan International Professional Awards Banquet was held on April 15 at the Hall of Nations. Ninety-three ethnic organizations participated and 17 honorees were recognized. Among them were individuals from the Chinese, Croatian, Columbian, Ghanaian, Iraqi, Jordanian, Indian, Lebanese, Liberian, Mexican, Nigerian, Pakistani, Polish, Ukrainian and Yemeni communities. The awards were presented by Nada Dalgamouni, the director of global education.

Dr. Czubatyj has a Ph.D. in leadership of higher education with a master’s in nursing and healthcare administration. She has been active in the Ukrainian community since childhood and was taught the importance of knowing another language and keeping traditions as part of her family life. She began folk dancing with Ms. Kulchesky when she was 5 and was invited to dance with the Echoes of Ukraine Dance Ensemble. At the height of her dance career she was a soloist; today she is the director of the ensemble.

Performing over the years at many multicultural festivals and events heightened her awareness of cultural diversity. This experience and knowledge has helped her in her professional role as program director for nursing to understand students of various backgrounds. Global education has become a major portion of the nursing curriculum. In a multi-ethnic environment like southeastern Michigan, students need to understand each other and work together to be successful in their educational journey. Dr. Czubatyj’s role as the director of the RN to BSN completion program at South University is to enhance the cultural awareness of students, which stimulates curiosity and motivates learning, thus helping them to prepare for the patients they will serve in the community in their future role as nurses.

Ms. Ohar-Kushner was born and raised in Michigan. She lived for 30 years in Oregon, where she started a woman-owned business, Applied Technical Video, which specialized in video and photographic documentation and communication services for the engineering and construction industries. When Ukraine became independent, she worked as an interpreter and cross-cultural liaison for a series of U.S. Hanford-Chornobyl exchange programs. She served on the board of directors of Chornobyl Union International, the Chornobyl victims’ organization, and was instrumental in the effort to have it recognized as an NGO of the United Nations.

She is an active member of the Ukrainian National Women’s League of America and PR coordinator for its Detroit Regional Council. She serves on the board of the Ukrainian Cultural Center and is president of the Ukrainian American Civic Committee, which was founded to provide coordination of community-wide events such as the annual celebration of Ukrainian independence, the commemoration of the Holodomor, the Chornobyl disaster and the anniversary of the birth of Taras Shevchenko. With circumstances changing in Ukraine, the committee extended its scope of activities to support Ukraine and the Revolution of Dignity.

Ms. Ohar-Kushner was a co-chair of the Save Ukraine Now launch of the “Ukraine Survival Campaign,” which resulted in three containers being sent to Ukraine from the Detroit metropolitan area for the refugees of Vladimir Putin’s war in eastern Ukraine.

Ms. Ohar-Kushner was recently honored as Ukrainian of the Year by the Ukrainian Graduates of Detroit and Windsor.

The International Institute of Metropolitan Detroit was founded in 1919 by a group of YWCA volunteers who sought to help immigrants learn English, become U.S. citizens, assimilate into their new communities and learn to understand each other’s cultures. For 97 years the institute has provided resources necessary to advance the welfare and integration of foreign-born residents, promote cross-cultural awareness and celebrate the heritage of Michigan’s multi-ethnic communities.