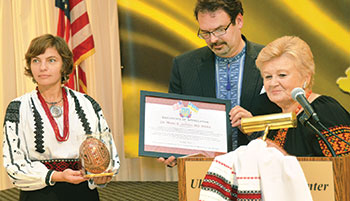 Ukrainian Weekly Editor | The Ukrainian Weekly | Subscription
Dr. Mark Juzych (center) receives an award for his surgical treatment of Dmytro, a young man who lost his eye during the Euro-Maidan in February 2014. Also in the photo are Vera Andrushkiw (right), mistress of ceremonies, and Dr. Olena Danyluk, president of the Ukrainian American Civic Committee.

WARREN, Mich. – Ukrainians in  Metropolitan Detroit celebrated the 25th anniversary of Ukrainian independence with a prayer service for Ukraine and its people led by both Catholic and Orthodox priests, a keynote address assessing the progress Ukraine has made during its  first 25 years of independence by Prof. Alexander Motyl and a celebratory concert by local talent, followed by a banquet and  dance.

The event was bittersweet, as it was hard to celebrate with Vladimir Putin’s continued occupation of  Crimea and Russia’s unrelenting terrorist activities in eastern Ukraine.  However, in his address, Prof. Alexander Motyl pointed out that many political pundits did not believe Ukraine would  maintain  its democracy  for this long –  and it has.   In fact,  he pointed out, in the last two years since Maidan and the Revolution of Dignity, Ukraine has  stood up on the world stage and shown its resolve and commitment to freedom, self-determination and the rule of law.

According to Prof. Motyl,  “more has been accomplished in the last two years than in the entire 23 preceding Maidan.”   Thus, we should take heart in those accomplishments and look to a better future.

The gala celebration of Ukrainian Independence Day, organized by the Ukrainian-American Civic Committee of Metropolitan Detroit, was held on August 27 at the Ukrainian Cultural Center in Warren, Mich.

On the occasion of the 25th anniversary the Ukrainian community honored  local  benefactors who gave generously of their professional skills and time, and opened up their hearts to two of Ukraine’s wounded warriors: Dr. Carlos Ramirez of  St. John Macomb Hospital, Dr. Mark Juzych and the team at the Kresge Eye Institute, as well as  Dr. Zoryana Klepach, Dr. Nadia Juzych and Tetyana Bedrus, who opened their homes and welcomed Andrij and Dmytro into their families.

The address was followed by a celebratory concert that featured vocalists Khrystyna Bezckosta, Irynka Lapshynska, Tetyana Bedrus and Yuriy Marshtupa. Mr. Marshtupa dedicated his performance to the memory of the Rostenkos and the Shumylos for their very important input and care in changing them from  “Soviet people into Ukrainian patriots.” The role of various individuals in the struggle for Ukraine’s independence cannot be overestimated.

Proceeds from this event will be sent to Viktoria Voronovych to enable the International Alliance for Fraternal Asstance to continue its support for volunteer fighter battalions in the line of fire by delivering clothing, shoes, food, water, medical supplies and humanitarian aid.