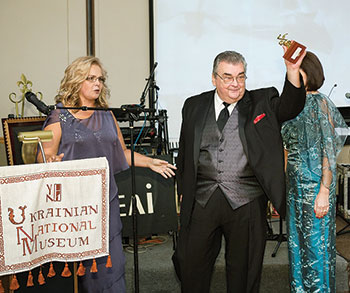 Past fund-raisers have included academic presentations, as well as discussions of cultural artifacts and creations. This year, museum President Lidia Tkaczuk explained the unique night’s theme: “a living exhibit of the renowned Chicago-based band Good Times – its contribution to our Ukrainian-American heritage, as well as a historical retrospective of countless memories, weddings, debutante balls, New Year’s eve dances, all shaping the musical history of our diaspora for 45 years.

For the UNM, 2016 was an auspicious year. The financial year ended in the black, UNM was listed as a place not to be missed by The New York Times in its article, “36 Hours in Chicago” (July 2016) and the Ukrainian Village was recognized by Redfin as the “Hottest Neighborhood in the U.S.” (January 2016).

The museum partnered with the Gene Siskel Theater and the Chicago Sister-Cities program to show the award-winning film “Babushkas of Chernobyl” in commemoration of the 30th anniversary of the Chornobyl disaster, receiving positive reviews and enjoying many sold-out nights.

A prime focus of the museum is the younger generation. Major collaborations with learning institutions, ranging from Ferris State University in Michigan to the Ukrainian Catholic University in Lviv, expose students to a host of primary sources about Ukraine’s history and culture. Exhibitions of art from illustrators of children’s books, as well as a display of dioramas depicting scenes from a world of folk tales, fantasy and childhood memories, engaged a multitude of students from both public and private neighborhood schools.

The annual fund-raiser is arguably the biggest night of UNM’s calendar. This year the museum feted members of the music industry with the first Golden Note Ceremony – recognition of the best band for its contributions to Ukrainian American history and culture. Maria Klymchak, UNM’s curator and the night’s mistress of ceremonies, capably managed the formal proceedings, presenting the award to members of the band Good Times, organized in 1974 by John Steciw.

This ensemble of devoted individuals with unusual talents and diverse backgrounds is united with Ukrainian music. Its performances influenced and impacted young Ukrainians throughout the world, offering a dynamic selection of live Ukrainian melodies in modern arrangements, harmonious renditions and unforgettable lyrics.

The evening concluded with a rousing retrospective performance by the band, sounding current, upbeat and unforgettable! The enthusiastic crowd of over 250 attendees refused to let the band conclude after the allotted 15 minutes – it could have gone on till after midnight.

With passion, a vision, creative individuals and a supportive Ukrainian community, the Ukrainian National Museum in Chicago is sure to remain strong, expand its offerings and maintain its landmark status as a venue for Ukrainian culture in the Midwest. For further information, readers may call 312-421-8020.