2016: The wide world of Ukrainian sports 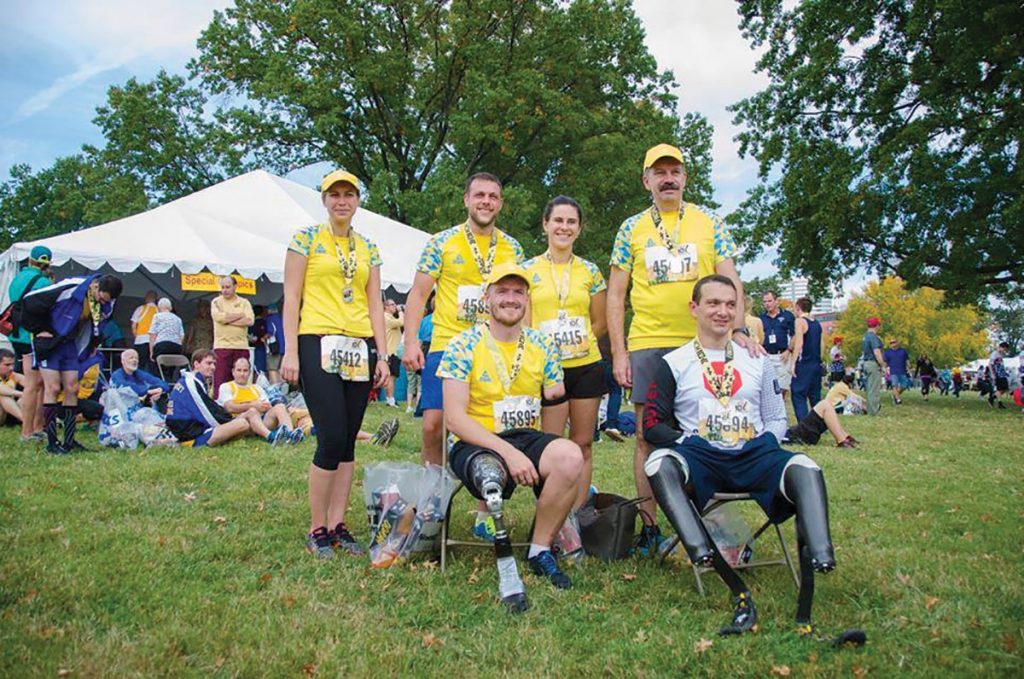 The 2016 sports year was an internationally competitive one with Ukraine an active participant on the world stage. After a dreadful performance at soccer’s 2016 Euro Cup and a disappointing result at the Rio Summer Olympic Games, Ukraine demonstrated it is a world leader in Paralympic sports.

Three straight losses on the pitch in a somewhat challenging grouping with Poland, Germany and Northern Ireland cost national coach Mykhailo Fomenko his job. Ukraine continued its downward trend of medaling at the Summer Olympics, where Oleh Vernyayev was a rare celebrated podium presence. Expectations for Ukraine were still high heading into the third international contest and this time the nation exceeded them with an unbelievable third overall showing at the Rio Paralympic Games. Ukraine won 117 medals at the Paralympics, including 41 gold and 37 silver. On the heels of winning 84 medals and placing fourth overall in 2012, Ukraine firmly established itself as a Paralympics power. Ukrainian Vasyl Lomachenko solidified himself as a boxing champion by winning and defending the WBO junior lightweight title. Ukrainian tennis star Elina Svitolina shocked the world when she defeated American champion Serena Williams in round of 16 Olympics tennis. In a sign of the times, the Ukrainian rhythmic gymnastics, five-a-side ultimate fighting and biathlon teams boycotted scheduled competitions held in Russia – the Moscow Grand Prix (February 19-21) and the Alina Cup (February 19-20).

Here comes our annual highlight package of the year’s top performances in sporting competitions and a recap of Ukrainian sports headlines from around the globe and our diaspora.

Eight all-star teams competed at the 17th Little League tournament in Kremenets, Ukraine, at the end of May with Kremenets beating Rivne 7-1 in the June 1 final. Ukraine won its first European Under-21 BASEBALL Championship on August 1-4 in Tel Aviv, Israel, after defeating Russia 7-5. The ninth Ukraine Little League Championships for orphans and invited New Programs was played in Kremenets, Ternopil Oblast in late September.

Sviatoslav Mykhailiuk enrolled at the University of Kansas to play BASKETBALL at one of the NCAA’s most storied college hoops programs in hopes of an NBA career. Alex Len of the NBA’s Phoenix Suns enjoyed a breakthrough second half of the 2015-2016 season when he averaged 12.5 points and 10 rebounds per game, making himself a valuable contributor to a rebuilding squad and setting himself up for a most lucrative second contract.

Hanna Ushenina won gold in the European Women’s CHESS Championship held on May 26-June 3 in Romania.

In CYCLING, Natalia Krompets won the Portugal Cup race in Viana-du-Kashtel on March 17 with a time of 1:25:02 seconds. Ukraine’s women’s saber team (Kharlan, Komashchuck, Kravatska + Voronina) won 45-44 in the final against Russia at the World Cup of FENCING competition in Athens on January 31. Olha Kharlan won first place in the women’s individual saber event at the Yves Brasseur World Cup on February 19-21 in Belgium. Dimitri Karinchenko (U-23) won gold in saber at the 2016 junior fencing championships on March 12 in Poland. Bohdan Nikishin won gold in the Rio Grand Prix men’s epee event on April 22 in Rio de Janeiro. Kharlan won another gold in the women’s saber event at the Foshan World Cup on May 13-15 in Foshan, China. Ukraine won first place in the team event Challenge SNOF Reseau in Paris on May 22. Olha Kharlan won the Moscow Grand Prix in women’s saber on May 28.

Hanna Rizatdinova won five gold medals (senior individual all-around, hoop, ball, clubs and ribbon) at the Miss Valentine 2016 Competition on February 11-14 in Estonia. Rizatdinova won two first-place medals in the senior hoop and ribbon events at the Rhythmic GYMNASTICS World Cup in Espoo, Finland, on February 26-28. Ukraine’s Krystym Pohranychna and Olena Diachenko won first place in the junior individual team final at the 2016 Aphrodite Cup on March 11-13 in Athens. Oleh Vernyayev won gold in the men’s vault and horizontal bar at the Gymworld Challenge Cup Turnier der Meister in Germany on March 31-April 3. Ihor Radivilov won gold in men’s rings. Rizatdinova won two golds and a silver at the FIG Rhythmic Gymnastics World Cup on April 1-3 in Italy and gold at the women’s International Rhythmic Gymnastics Tournament in France on May 6-8, earning first place in hoop, ball, clubs, ribbon, all-around and seniors finals. Ukraine won five gold medals at the 2016 World Challenge Cup in Bulgaria on May 13-15. Vernyayev won gold in men’s parallel bars, pommel horse and floor exercise. Radivilov took gold in rings and vault. Yana Fedorova won gold in the women’s vault at the Gym Festival 2016 in Slovakia on May 15. Rizatdinova won a gold medal in hoop at the 2016 Rhythmic Gymnastics World Cup in Bulgaria on May 27-29 and gold medals in hoop and clubs, while team Ukraine won gold in the two hoops and six clubs event at the 2016 Rhythmic Gymnastics World Cup series event in Berlin on July 1-3.

Three young budding Ukrainian players in the National HOCKEY League, among many, included Calgary’s Matthew Tkachuk, Toronto’s Dmytro Timashov and new Flames prospect Hunter Shinakruk. The first was waiting to be drafted, the second was awaiting a call-up from the minors and the third was recently traded. Colton Parayko, “the Uke with the nuke,” surprisingly stuck with the St. Louis Blues after his recall from Chicago (AHL), making a huge impact on the team’s blueline and garnering serious support for Rookie of the Year. Tom Lysiak, 63, an NHL All-Star and 13-year veteran, passed away on May 30 after battling leukemia. He scored 292 goals and 551 assists in 919 career games. Three Ukrainians were selected in the first round of the 2016 NHL Entry Draft, all sons of ex-NHLers. Matthew Tkachuk (No. 6), Jakob Chychrun (No. 6) and Kieffer Bellows (No. 19) were selected by Calgary, Arizona and New York Islanders, respectively. Defenseman Mark Pysyk was traded by Buffalo to Florida, Lee Stempniak signed with Carolina, and Dave Schlemko cashed in on a new deal with San Jose. Kyle Brodziak stayed in St. Louis, while Jordin Tootoo hooked up with the Blackhawks. Two-time Stanley Cup champion Ruslan Fedotenko announced his retirement from professional hockey at the age of 37 on October 11.

Ukraine announced plans to send a team of athletes to the 2017 INVICTUS GAMES in Toronto on September 24-30, 2017, the Ukrainian Canadian Congress announced in late September. The Invictus Games are an international sports competition in which wounded, ill and injured military personnel and veterans take part. The UCC is partnering with Ukraine’s Ministry of Youth and Sport under the action plan of the Ukrainian World Congress, the National Olympic Committee of Ukraine and the National Committee for Paralympic Sports. The first meeting of the UCC Invictus Games Organizing Committee took place in Toronto on November 10 with a call for some 1,500 volunteers to join the community efforts to support Team Ukraine’s participation in the games.

Ukraine’s Paralympic swim team won 110 medals (45 gold) at the European Swimming Championship in Portugal on April 30-May 7. Thirty-five out of 45 athletes were medal winners. Ukraine set 10 records and surpassed rival Russia for the first time in several years. It is worth repeating: Ukraine is a PARALYMPICS power! With 117 total medals at the Paralympic Games in Rio, behind only China and Great Britain, it was a second successive worldly demonstration of Paralympic prominence. Swimming (74 medals) was Ukraine’s sport of expertise, with Maksym Krypak’s outstanding achievement of four gold and two silver individual medals, plus two additional medals in relay victories. Yelyzaveta Mereshko was top female performer with four gold medals in swimming and another in relay. Denis Dubrov (two gold, two silver, two bronze) and Ievgenii Bogodaiko (three gold, two silver, one bronze) each captured six individual swimming medals and two additional relay medals. Yehor Dementyev (two golds) was a force in both road and track cycling, while Ukraine proved most competitive in athletics with a total of 19 medals. Valeriy Sushkevych gets credit for his country’s Paralympics success. The president of the National Paralympic Committee developed a training program called Invasport, which works by having schools and facilities dedicated to Paralympic sports in every Ukrainian oblast. The goal is to set up the best system possible of physical education, sports and rehabilitation for people with disabilities.

In the first of two warm-ups for the 2016 Euro Cup, Ukraine defeated Cyprus 1-0 in Odesa on March 24 and outkicked Wales 1-0 in Kyiv on March 28. One of Ukraine’s most talented SOCCER players, Andriy Yarmolenko, held out hope for a promotion to the English Premier League. Andriy Shevchenko joined Ukraine’s national team coaching staff ahead of Euro 2016, replacing assistant Olexandr Zavanov in mid-February. Ukraine defeated Romania, 4-3, on May 29 and beat Albania 3-1 on June 3 in two final friendly matches before Euro Cup 2016. Germany and Ukraine served up high levels of technical ability and plenty of drama in their 2016 Euro Cup opener on June 12. Goals by Mustafi and Schweinsteiger allowed the Germans to survive several scares and defeat Ukraine 2-0. Ukraine lost its second Euro Cup match to Northern Ireland 0-2 on June 15, effectively earning the dubious distinction of being the first of 24 participating nations to be eliminated from the tourney. Poland’s 1-0 victory in the final contest left Ukraine with zero points, five goals against and zero goals for after three matches. The Dynamo-Shakhtar conflict, coaching strategies, lack of talent, a lack of competitive spirit and the two-year battle with Russia-backed separatists all factored into Ukraine’s dismal showing at the 2016 Euro Cup. Dnipro midfielder Roman Bezus, 25, a Ukrainian national team member, signed a one-year deal with Belgian club St. Trudien on July 12. Shevchenko was promoted to head coach of the men’s national team on July 15 in a unanimous vote, replacing Mykhailo Fomenko, who resigned following his club’s failure in the 2016 Euro Cup.

In TENNIS, Elina Svitolina won the BMW Malaysian Open on February 29-March 6 after defeating Eugenie Bouchard, 7-5, 6-4, 6-7(5) in the finals. Sergey Stakhovsky won the ATP Challenger Tour event in Seoul, South Korea, on May 9-15 after topping Yen-HsunLu of Chinese Taipei in the final. Illya Marchenko won the Guzzini Challenger tournament in Recanati, Italy, on July 18-24, beating Belarus’ Ilya Ivashka in the final. Lesia Tsurenko and Kateryna Bondarenko have both trended upward in the WTA rankings based on their recent tournament play. Add in top-20 ranked Elina Svitolina and it is obvious women rule the Ukrainian professional tennis world these days. Tsurenko won the WTA tournament in Guangzhai, China, on September 19, after defeating Jelena Jankovic, 6-4, 3-6, 6-4 in the final match.

Khrystyna Dmytrenko won gold in the women’s 7.5-km biathlon at the fourth YOUTH OLYMPIC GAMES on February 12-21 in Norway.

A team of Ukrainian wounded warriors participated in the 41st U.S. MARINE CORPS MARATHON on October 30 in Washington. Nine Ukrainian soldiers dedicated their run to all Ukrainian military personnel who lost their lives or health while combating Russian aggression against Ukraine.

Valentine’s Day was the date of the third annual Ukrainian Heritage Day with the New Jersey Devils, when fans attending a hockey game witnessed a Ukrainian festival. Ukrainian dance groups and soloists performed while two wounded Ukrainian warriors were presented as “Heroes of the Game” during the second period of the game, won by New Jersey 1-0 against the Los Angeles Kings.

September 17 saw the formal opening of the Ukrainian Sports Museum and Hall of Fame at the Ukrainian American Cultural Center of New Jersey in Whippany, thanks to much dedicated effort by Myron Bytz. Some 180 guests attended the gala event which included the inaugural induction of 51 sports persons into the Ukrainian Sports Hall of Fame. Master of ceremonies for the evening was The Weekly’s sports correspondent, Ihor Stelmach, and ex-New Jersey Devils defenseman Ken Daneyko (who is 100 percent Ukrainian) was the keynote speaker. On October 20, hockey great Wayne Gretzky was captured in a photo accepting his induction plaque and gifts from the Ukrainian Sports Museum and Hall of Fame at the NHL store in New York City. Museum curator Theodore Bodnar made the presentation, which coincided with the “Great One’s” book tour stop.