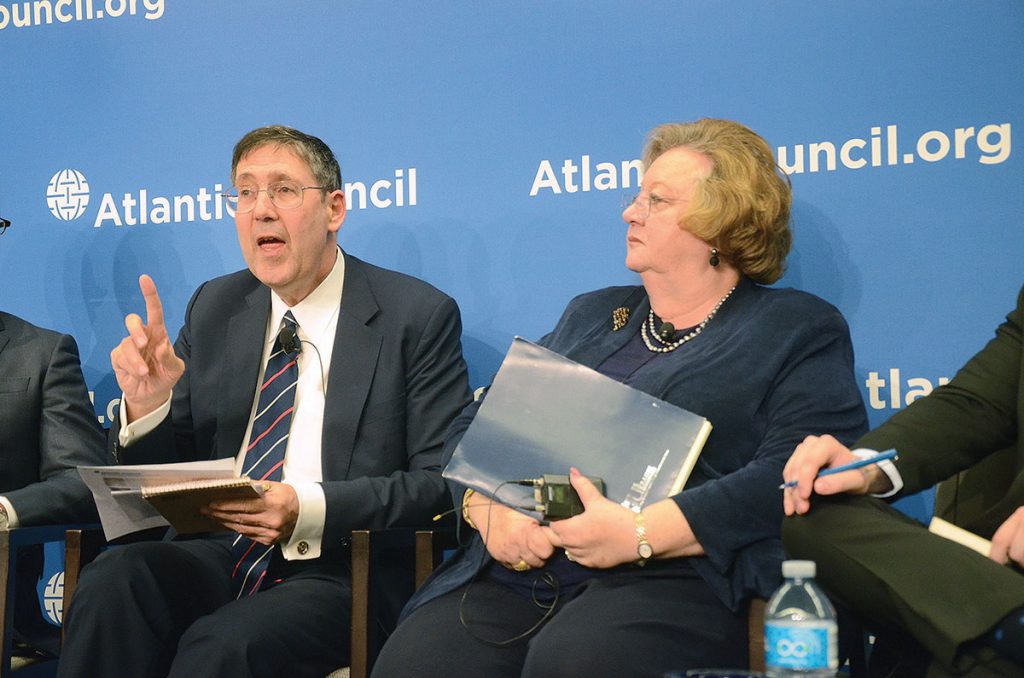 Yaro Bihun
John Herbst, who served as U.S. ambassador to Ukraine in 2003-2006, describes Russia’s “brief flirtation with democracy” as sadly ending when Vladimir Putin took over that country’s leadership. Sitting next to him during the Atlantic Council’s panel discussion about “Connecting Ukraine’s Past and Present: from Holodomor to the War in Donbas,” is Nadia McConnell, president of the U.S.-Ukraine Foundation.

WASHINGTON – For those in the U.S. capital area actively interested in finding a resolution to the dire situation Ukraine and other countries find themselves in because of Russian President Vladimir Putin’s pursuit of military aggression and an active disinformation policy, the Atlantic Council think tank discussion “Connecting Ukraine’s Past and Present – from Holodomor to the War in Donbas,” was a great step forward to a better understanding of how and why that situation developed as it did and what needs to be done to resolve it.

As Mr. Sawkiw pointed out in his opening remarks, Russia’s use of disinformation is not something new. He noted that French writer Marquis de Custine, who traveled to Russia often in the mid-1800s, indicated in his book “Letters from Russia”: “Russia lies, Russia denies the facts, makes war on the evidence, and wins.”

And that “informational war” continues today, Mr. Sawkiw said. The Soviets denied until the 1980s – about the time when Ukrainian Americans started raising the issue in this country – that Stalin launched the Holodomor, the artificially created famine in the 1930s that killed millions of Ukrainians.

He pointed out that members of the U.S. Congress and U.S. presidents had issued many statements on the Holodomor, and the process culminated in 2008, when President George W. Bush declared that the Holodomor was “a crime against humanity.”

He noted that this genocide now has also found a place in American high school social studies curricula and has a memorial to its victims in Washington.

Mr. Rivkin agreed that a factual high school curriculum is important. He said he checked a Russian high school history textbook back in 2008, and this is what it taught about the Holodomor: “The famine was a result of weather conditions as well as the incompleteness of collectivization processes. Collective farms were not yet able to provide the required level of production of bread while the kulaks – the wealthy farmers – were liquidated as a social class and did not participate in the production.”

Mr. Rivkin also noted that Walter Duranty, The New York Times Moscow correspondent from 1922 to 1936, may well have deserved the Pulitzer Prize he received for his work there, but for – as he phrased it – “Orwellian linguistic gymnastics” and not for journalism.

This was how Duranty described what was happening in Ukraine then: “There is no actual starvation. But there is widespread mortality from the diseases due to malnutrition.”

But Duranty was not alone in his misperception, he added. Many prominent leaders and experts were fooled by Moscow’s propaganda campaign. Even Arthur Kessler, author of “Darkness at Noon,” one of the best books on communism ever written, dismissed the dying Ukrainians as “enemies of the people who preferred begging to work.”

Mr. Rivkin said that journalist Gareth Jones, who broke the story on the Holodomor, quoted then Russian Foreign Minister Maxim Litvinov as saying flat-out that there is no famine, but then tailoring his statement to: “You must take a longer view. The present hunger is temporary.”

And today’s Russian propaganda about Crimea and the Donbas is similar, Mr. Rivkin said.

USUF President McConnell made the point that the United States was the first government in the world to recognize that the Holodomor took place and that a caucus of Ukrainian Americans worked with Sen. Ernest Hollings (D-S.C.), who sponsored the Senate resolution that did so.

But, as she noted, such things did not always work so smoothly. Back in 1934, U.S. Rep. Hamilton Fish II (D-N.Y.) introduced a resolution on the artificial famine in Ukraine. In a later interview, she said, he “ranted and raved” about President Franklin D. Roosevelt – who wanted to recognize Russia – for letting geopolitics get in the way of the Congress officially recognizing what was taking place there.

“Does anyone see parallels to today?” she asked, adding: “Unfortunately I don’t think we see much changes in the situation both in the playbook by the Kremlin or, unfortunately, in terms of the politics here, in Washington.”

Mr. Herbst, who served as U.S. ambassador to Ukraine from 2003 to 2006, noted that Mr. Putin’s Russia has serious political and human rights problems. “Sadly, this brief Russian flirtation with democracy ended when you had the handoff from President [Boris] Yeltsin to then Prime Minister Putin, who became President Putin.” And Mr. Putin was a KGB agent, he noted, adding that one never leaves the KGB.

As for the importance of remembering and honoring the Holodomor, Ambassador Herbst said that it is important for Ukrainian national consciousness and for understanding the horrors of communism not only in Ukraine but elsewhere.

And he noted that the new film about the Holodomor, “Bitter Harvest,” a trailer of which was shown at the beginning of the Atlantic Council discussion and would open in a number of Washington area movie theaters on February 24, can be an important event.