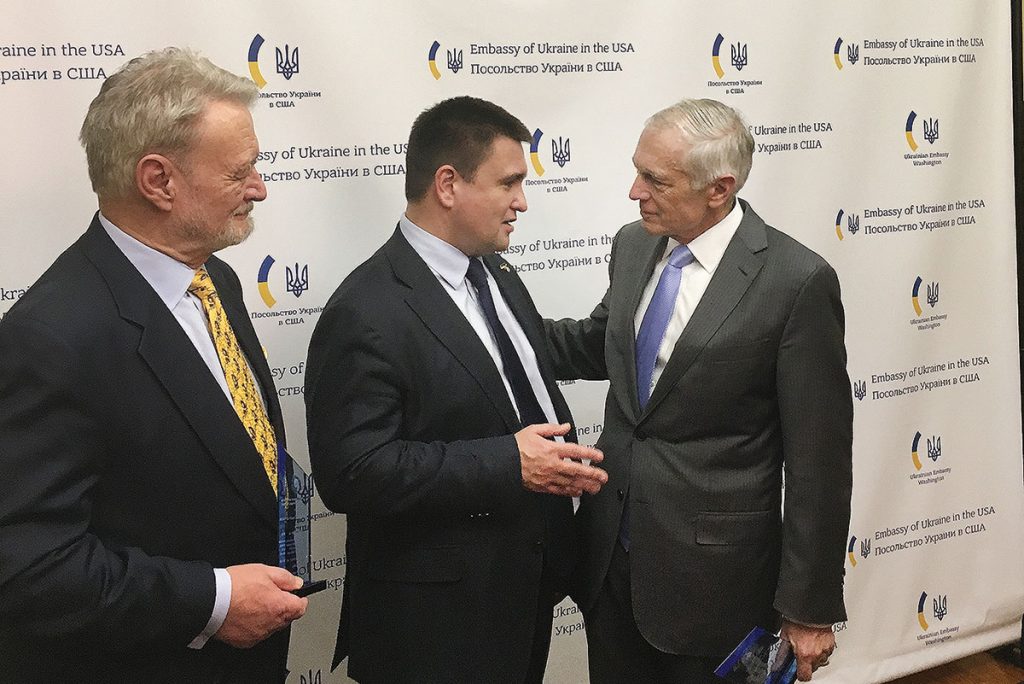 UCCA
At a reception held at the Embassy of Ukraine on the eve of a conference on securing Ukraine’s sovereignty, Ukraine’s Foreign Affairs Minister Pavlo Klimkin is flanked by Dr. Phillip Karber (left) and Gen. Wesley Clark (ret.), both of whom were honored with Friends of Ukraine awards presented by the Ukrainian Congress Committee of America.

NEW YORK – “Securing Ukraine’s Sovereignty: The Road Ahead” was the title of a daylong academic conference held on February 15 at the U.S. Library of Congress that was organized by the Center for U.S.-Ukraine Relations (CUSUR) in collaboration with the American Foreign Policy Council (AFPC) and the Ukrainian Congress Committee of America (UCCA).

Over two dozen leading voices on national security, international diplomacy and government affairs spoke in a roundtable format, discussing the damage done to European security and international law by Russia’s continued attacks on Ukraine, and debated what advancements had been made in the areas of diplomacy, economic reform and the military readiness to protect Ukraine from future attacks.

Conference attendees gathered in the historic Thomas Jefferson Building of the Library of Congress, where, prior to the first roundtable, select government representatives arrived to offer greetings. The CUSUR team, led as always by Prof. Walter Zaryckyj, ushered in Rep. Brian Fitzpatrick (R-Pa.) and Rep. Sander Levin (D-Mich.), co-chairs of the Congressional Ukrainian Caucus, who both hailed the community for organizing an event of such importance.

Taking over his brother’s seat in both Congress and the caucus, Rep. Fitzpatrick remarked on the incredible bipartisan support for Ukraine he has already witnessed in Congress. As his first committee assignment will be to the House Committee on Foreign Affairs, he implored the Ukrainian community to remain actively involved in advocating Congress in order to “better guide us.”

Rep. Levin decided to speak “bluntly,” as he put it, recalling the history books of his youth that denied Stalin’s genocide of the Ukrainian people. In much the same way, he said, today’s propaganda from Russia is denying the Kremlin’s involvement in the thousands of deaths in Ukraine. As with the Holodomor, today’s lies are being disproved by the facts on the ground, such as the presence of Russia’s lethal munitions in Ukraine.

Shortly after both congressmen spoke, Pavlo Klimkin, foreign affairs minister of Ukraine, took to the podium to hail Ukraine’s trans-Atlantic allies for their support. Although the attention of the conference attendees may be on the war in Ukraine, Minister Klimkin said it was important to remind everybody that Russia has been waging a hybrid war against the entire civilized world. By supporting fringe parties on the right and the left throughout the European Union, Russia has attempted to squeeze out “reasonable people in the middle.”

It is only through solidarity, said the minister, that we can apply increased pressure on Russia, and see the return of Crimea and the end of violence in eastern Ukraine. Ten days prior to the most recent hostilities in Avdiyivka, Ukraine recorded a fresh inflow of munitions from Russia, he noted. In response, the international community must unite to secure access for international monitors to Ukraine’s borders and the occupied territories.

The rest of the conference was broken up into four subsections, beginning with former Ambassador John Herbst (now of the Atlantic Council) moderating a discussion on “Ways to Strengthen Ukraine Militarily.”

Col. General Ihor Smeshko, an adviser to the president of Ukraine, gave a brief background on the beginnings of Ukraine’s armed forces following the break-up of the Soviet Union, and noted that Ukraine at the time had the world’s third largest nuclear arsenal.

Dr. Phillip Karber, president of the Potomac Foundation, recalled his first visit to Ukraine following Russia’s invasion of Crimea and said he had heard from military professionals that they did not give Ukraine much of a chance to repel a sustained invasion. In contrast, Dr. Karber noted, today’s Ukrainian military is made up of a new generation of combat-trained professional soldiers, not trained in the Soviet model, who in many ways can inform the U.S. military of lessons it had long since forgotten.

James Sherr of the London-based Chatham House, the Royal Institute of International Affairs, also recalled the dire picture of Ukraine’s military in the aftermath of Russia’s invasion, and the days, weeks and months during which Russian strike forces had been positioned to take over large tracts of Ukrainian territory, particularly the “land bridge to Crimea.” The key lesson learned from this war should be that acting in fear of Russia is more dangerous than provoking Russia; the Kremlin, after all, does not respect signs of weakness, especially those coming from superior adversaries, Mr. Sherr stated.

In assessing the diplomatic and political actions that need to be taken to secure Ukraine, former U.S. Ambassador to Ukraine William Taylor (now with the U.S. Institute of Peace) engaged Ukrainian National Deputy Andrii Levus, the Jamestown Foundation’s Vlad Socor and the Heritage Foundation’s Luke Coffey to discuss what’s at stake when we talk about Ukraine today. Notably, Mr. Coffey emphasized that, “as long as Putin is in charge of Russia, Russia will not be a credible partner for the United States.” Diplomatically, it was noted, the president could send no stronger a signal to the Kremlin than by inviting Crimean Tatar leaders to the White House.

Glen Howard, president of the Jamestown Foundation, discussed the new U.S. administration further with John Falk of Vigilent Inc, and Herman Pirchner, president of the American Foreign Policy Council. A steady stream of facts being shared with the White House will only grow support for increasing aid to Ukraine, said the panelists, as best evidenced in recent fact-finding missions to Ukraine and the Baltic states by members of President Trump’s national security team.

Anders Aslund of the Atlantic Council, Ariel Cohen of the Institute for the Analysis of Global Security and Morgan Williams of the U.S.-Ukraine Business Council departed from military matters to concentrate attention on economic and energy priorities for Ukraine. In a discussion led by former U.S. Ambassador to Ukraine Roman Popadiuk (now of the World Affairs Councils), the legacy of Ukraine’s infrastructure and untapped economic potential was carefully dissected for the benefit of the layman.

Prior to the final panel, Rep. Brendon Boyle (D-Pa.), another vocal member of the Congressional Ukrainian Caucus, arrived to greet the conference. He reminded the audience that a strong, bipartisan piece of legislation providing aid to Ukraine had been passed by the House of Representatives in the previous year but failed to move any further. The STAND for Ukraine Act was recently reintroduced, but it will need community support to get to the president’s desk. Legislative actions such as these represent support not just for Ukraine, but all United States allies that border Russia, the congressman said. Rep. Boyle ended his remarks by calling for an “end to the occupation of Crimea and the rest of Ukraine.”

William Courtney, former U.S. ambassador to Georgia and Kazakhstan (now of the RAND Corporation), led a final panel, tackling Russia’s “Info War/War on History” against Ukraine. Stephen Blank of the American Foreign Policy Council and Janusz Bugajski of the Center for European Policy Analysis presented the reality of Russia’s hybrid war from the European and American perspectives, while Ukrainian National Deputy Oleksiy Skrypnyk discussed the totality of the information war within Ukraine.

On the evening prior to the conference, all of the speakers and sponsors were invited to attend a private reception at the Embassy of Ukraine. They were greeted by Ambassador Valeriy Chaly and Foreign Affairs Minister Klimkin, who spoke about the seriousness of the diplomatic talks taking place both in the United States and in Europe. Ambassador Chaly reiterated that Ukraine still needs international support, stressing that any such assistance would be returned in the future in the form of a strong alliance partner ready to assist its friends.

Echoing this theme, Minister Klimkin reflected that occasions such as this reception and the next day’s conference demonstrate the value of friendships. Such reliance of friend upon friend is best demonstrated by the patriots defending Ukraine today, the minister said, in the faces of the soldiers, volunteers, Ukrainians and Crimean Tatars “fighting for freedom together.”

Thanking the conference co-organizers, CUSUR and AFPC, Minister Klimkin turned the microphone over to UCCA President Andriy Futey, while also thanking him and the Ukrainian American community the UCCA represents for all of the grassroots support that has aided Ukraine throughout the years.

In advance of this conference, the UCCA had prepared a new community award to stand alongside its Shevchenko Freedom Award, which has honored elected leaders, diplomats and community leaders for their support of Ukraine. Inspired by the 20-year partnership between NATO and Ukraine, and the development of U.S.-Ukraine military cooperation, the UCCA now honors military leaders and national security professionals with its Friend of Ukraine Award.

This unique, fraternal bond between military professionals is best exemplified in the life’s work of the initial two recipients of the award, Gen. Wesley K. Clark (ret.) and Dr. Karber.

Presenting the award to Dr. Karber, Mr. Futey hailed his several dozen fact-finding missions to Ukraine since the beginning of Russia’s invasion, the results of which have informed elected officials, as well as the general public, through an unprecedented level of reporting on Europe’s largest land war since World War II.

Accepting the award, Dr. Karber shared that beyond the birth of his six children and seven grandchildren, the conversations he’s shared with today’s defenders of Ukraine have meant the most to him. He accepted the award in their honor.

In accepting his award, Gen. Clark recalled that his first trip to Ukraine was as a cadet in 1964. Back then, he had a Ukrainian American roommate traveling with him, who introduced him to his family behind the Iron Curtain. Sitting around the dinner table in a Ukrainian village was the first time Gen. Clark said he remembered hearing the Ukrainian language after arriving in Soviet-dominated Kyiv.

The Embassy of Ukraine also honored Gen. Clark and Dr. Karber for their work, presenting both with specially minted wristwatches produced by the Ministry of Foreign Affairs to celebrate the 25th anniversary of the establishment of diplomatic relations between Ukraine and the United States.